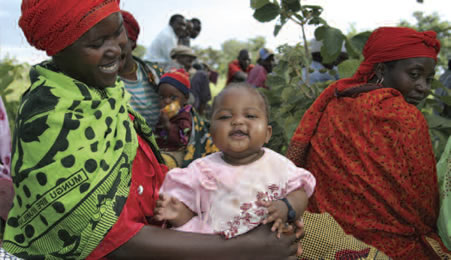 Inside the maternity ward at the Kagera Health Center in northwestern section of Tanzania are more than a dozen young women—some with infants in their arms, lying on tattered cots too worn for repair; others still waiting to give birth. Most of the women have been here for two to three weeks; all came hoping for a safe delivery.

An overly stretched staff, working on a shoestring budget, attends to 25 to 30 women each day. Acting center director Raheli Kansheba agrees that the conditions aren’t optimal, of course, and that there isn’t always enough food to feed the women who stay. Yet the skilled health care that patients receive here can make the difference between whether a woman—and her child—lives or dies.

According to the World Health Organization, an estimated 13,000 women die each year in Tanzania due to labor and pregnancy-related complications, and more than a quarter million more suffer disabling conditions. The country ranks 21st highest maternal mortality rate among African nations. Like its neighbor Uganda, Tanzania is one of the world’s poorest countries, and 75 percent of its population lives in rural areas. Transportation is spotty and health-care facilities are often miles away from local communities, making it extremely difficult for women who experience pregnancy complications—which can include severe hemorrhage, infections, anemia and obstructed labor—to access skilled health care.

Lack of access to obstetric care is one of the major obstacles worldwide in reaching Millennium Development Goal #5 to reduce maternal deaths by three-quarters—a mark set forth by the international community in 2000. As the deadline looms for achieving that goal—2015—many agree it’s a deadline Tanzania is unlikely to meet.

Yet efforts to reduce the number of maternal deaths are being stepped up by NGOs and communities determined to make a difference. Women’s Dignity, a Tanzania-based NGO working to improve maternal health care in the country, organizes community meetings in some of the more remote areas of Tanzania and Uganda in hopes of reaching village women with messages about safe motherhood. These include: Rely less on myths and traditional birth attendants who are not trained to handle pregnancy complications. Have a delivery plan that includes transportation to the nearest health facility. Learn how to identify pregnancy-related problems when they first appear.

I’m invited to attend a Women’s Dignity-led gathering at the Mikale Village community center where a group of local villagers—women and men—called the Nikwo Group will perform a selection of songs about safe motherhood and a skit about an old man who tells fables about pregnant women during times long past. To get to the town square, we drive down a narrow and bumpy road filled with potholes so big that we get a flat tire. I couldn’t help but think of women traveling down this road to get to the nearest health facility.

After the skit, Catherine Kamugumya, a Women’s Dignity program officer, speaks about the importance of families having a plan in place for childbirth. She passionately calls on men in the village to be more sympathetic to the needs of pregnant mothers as well.

Such community mobilization using performance theater is considered a low-cost intervention in addressing the problem of maternal mortality. Women’s Dignity says it costs less than $500 to organize such a meeting. However, the organization receives no government funds to help. Women’s Dignity executive director Christine Mulindwa-Matovu says that with more funding and human resources her organization could reach more villages and have an even greater impact. But that is only one part of the equation.

“We may be able to change the way communities think about this problem, but how do you change the community health system?” she asks.

Whether those dollars will come and just when they will be delivered will have to wait until after October 31 elections, as President Kikwete seeks his second (and final) five-year term. But tribunal organizers say they will keep the pressure mounting. Another tribunal is planned for 2011 with the same goal: to make maternal mortality a national priority.

Back at the Kagera maternity ward, I saw women awaiting delivery with worried faces—what would be the fate of their pregnancies? But their worries could be eased: Just provide them with knowledge, a sense of empowerment and access to skilled care. And devote adequate government and private resources to these efforts. Women shouldn’t have to die from childbirth when we know what to do to save them.

Read the full article in the Fall issue of Ms.

Belle Taylor-McGhee is a writer and former president and CEO of the Pacific Institute for Women’s Health. She serves on the board of EngenderHealth.