Look Out, It's the Guerrilla Girls on Tour! - Ms. Magazine
Skip to content 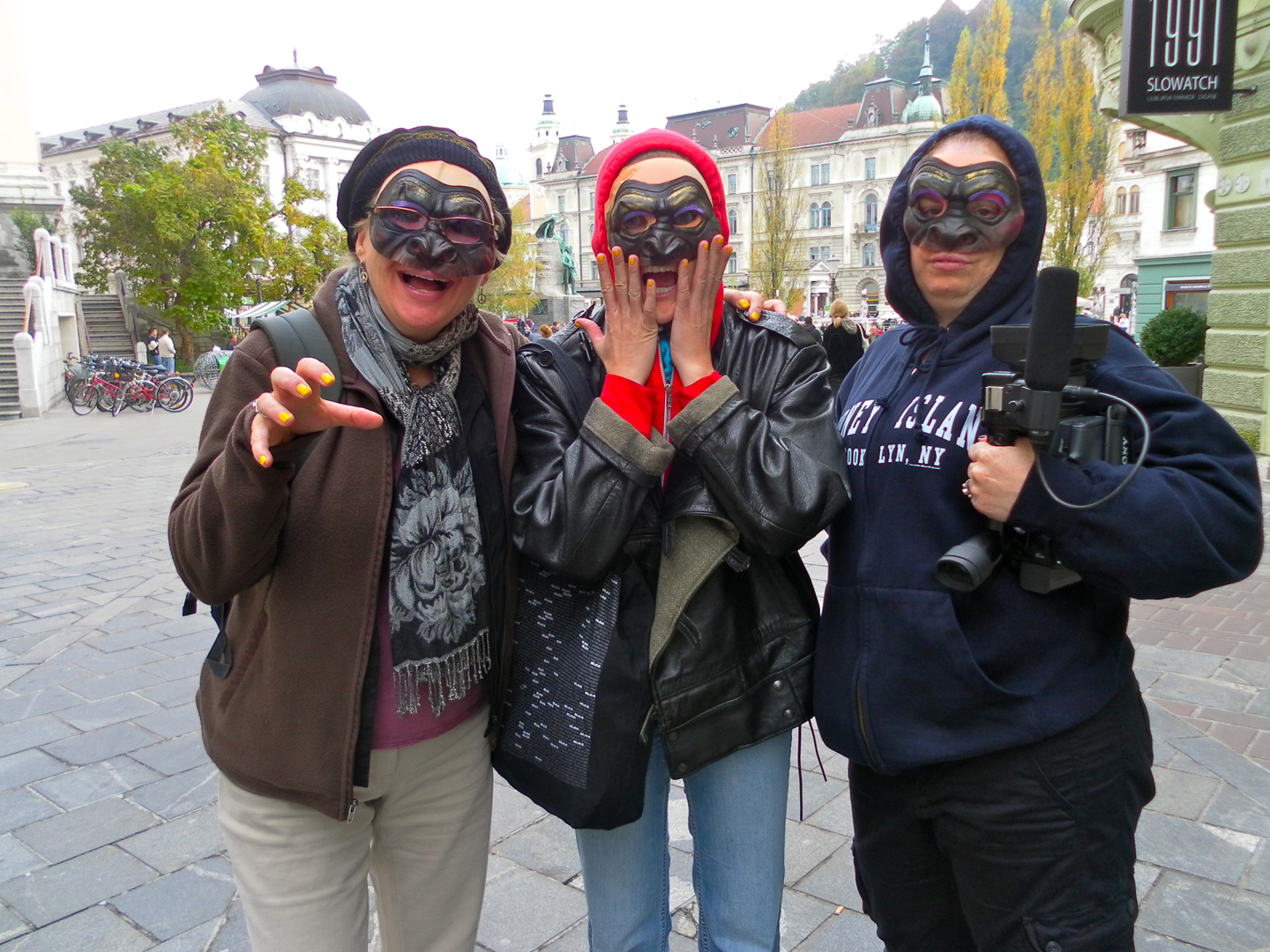 Masked crusaders. Feminist artists. Culture jammers. Though several groups have branched out of the famous Guerrilla Girls feminist collective that first plastered New York City with posters about art-world sexism 25 years ago, all of its offspring work to the same end–expose discrimination against women in various artistic mediums. World-traveling troupe Guerrilla Girls on Tour! shines a light on the challenges women face in the theater world. Fresh from a spin around Europe, guerrilla girls Aphra Behn and Julia Child (pseudonyms they use to keep themselves anonymous) spoke with Ms. about their current show, their European adventures, and whether things are getting any better for women working in theater.

What’s the mission of Guerrilla Girls on Tour!?

Julia Child (JC): We create stage performances, street actions, posters and stickers, to primarily look at gender-based inequality in the theater and performing-arts worlds. We don’t limit ourselves to that, and obviously since theater is such a big medium, we like to look at a lot of other issues while we’re expressing our opinions theatrically.

What was your favorite part of the Europe tour?

AB: We could not find any place in Europe that had coffee-to-go. Especially Slovenia.

JC: Aphra tried to order a tea at this place in Slovenia and the woman lied and said they didn’t have any tea when we were looking at…

AB: She was standing in front of a box of tea bags. 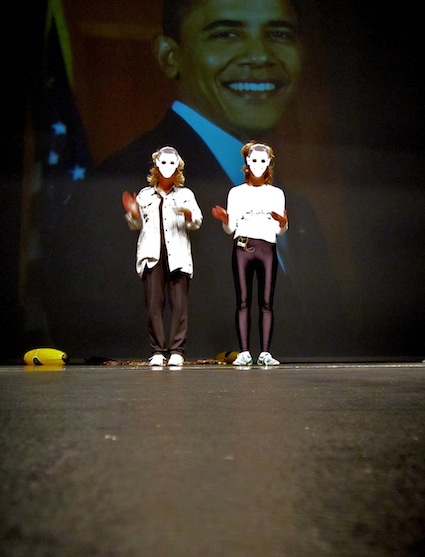 What elements or sketches are in your current show?

JC: Well, we decided this year  to reach out to all our contacts in the countries we were going to be visiting. We asked what was popular in terms of art and music and things there, so we could find some cultural common grounds. And every place we asked started talking about Lady Gaga.

The exact same thing happened to me when I was over there.

JC: Yeah, there’s like a dark humor that I feel translates to a lot of cultures, aesthetically and otherwise. So anyways, we did a lot of Lady Gaga parodies: one about world hunger called “Feed My Face” instead of “Poker Face”. One about women farmers and how much land they don’t own called “Microloan” instead of “Telephone”.

AB: The first one we did was about body image and it’s “Bad Romance” but [it’s called] “Size Two Pants”. So we use parody a lot in our shows. We’re doing a performance today [called] “Feminists are Funny” which we’ve been performing since the beginning, but it’s not the same show—we change it every single time we do it because we try to include topics that are hot and current. We do research and we try to do parodies, dramatizations, and jokes. That’s how we get people to think about issues, by making them laugh about them first.

Do your fans ever come up to you and tell you that you should parody ___ issue?

JC: Yeah, lots of people have lots of ideas about what we should be writing about. But we usually tell them that if they care so much about it then they should probably write about it… not in a mean way, not like, ‘You do it!’ (laughs) If you really want something to be done about it, you should go for it.

AB: We try to inspire people at our shows. We’re like, ‘You can’t become members of our group, but you don’t need us, go out and form your own groups and make your own parodies and steal our ideas and use our hobby and create your own drama about issues.’

I noticed on your Twitter that you were asking fans to help choose the issues for 2011. Have you chosen any already?

AB: No, but we like to get feedback from people about what they are thinking about. That’s one of the reasons we did “Size Two Pants”… We do a Q&A after our shows and a lot of people said to do something about women and body image.

One woman on Twitter had an interesting comment with regards to what we should be addressing. She quoted this old Timothy Leary quote, “Women who strive to be equal to men, lack ambition.” And she thought that might be a good place for us to start in thinking about, do we really want to be equal to men? Is that our goal? And if not, what should we be striving for?

I actually recently interviewed Nell Leyshon (the Globe’s 1st woman playwright) and asked her a similar question. She said that “[The men] were much more confident and bullish, and clear about asking for what they wanted. That inspires confidence in whoever is commissioning a play”.

AB: We found that women don’t know how to network in the theater world—or they don’t have access to the networking events that men do in theater. So we started our own networking event. Sometimes it turns into a bitch fest, but that’s fine, too.

The stats for women in theater are so bad that, I think, just thinking about the odds of getting your play produced when you’re a female playwright in undergraduate school can be overwhelming. But there have been so many interesting things that have happened with women in theater over the past two years. The Emily Glassberg Sands economic study on women in theater and all of these groups have sprung up like 50/50 in 2020 and the Dramatist Guild’s Women’s Initiative. We completely take credit for all this happening, of course (laughs). But you know, it does kind of feel like we’ve been beating our heads against the wall for over ten years and now finally people are saying ‘Hey yeah, there is discrimination [against women] in theater.’

If you could say one thing to inspire theater artists/activists that are reading the Ms. magazine blog, what would it be?

JC: Don’t compromise on your aesthetic.

“Never tell me the odds.”

AB: The odds … the statistics have remained steady in the past five or six years. Approximately 17 percent of all plays produced in the U.S. are written by women. I don’t think there is one play on Broadway right now that is written by a woman. We’re going to post our annual GirlCott list next week, which lists all the theaters that we can find in the U.S. that aren’t producing plays by women. Don’t buy tickets to those theaters, and write the artistic directors letters asking them why they aren’t producing women. And we have a Good News list as well.

JC: [That’s] a list of theaters that are producing more than 50 percent of shows by women.

AB: If we make up over 50 percent of the population–and it is a statistic that women do buy more theater tickets than men [Editor’s note: women buy 70 percent of theater tickets and are 60 percent of audience] then we can effectively change and reverse discrimination in theater ourselves, if we just buy tickets to the theaters who produce women and GirlCott those that don’t.

Where are you headed next?

AB: We like to go to other countries, so we’re trying to plan a tour to Turkey and also to visit the United Kingdom, as well as many other U.S. states. Women’s History Month is in the U.S. [in March] and that’s our busiest touring time. So we’re planning on hitting every single fun state we can.

Photos via Guerrilla Girls on Tour!