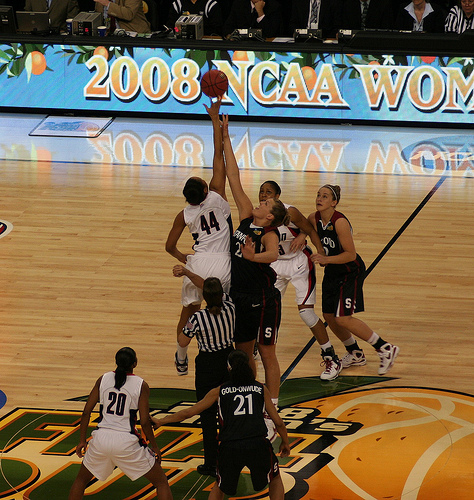 While I was attending UCLA, the men’s basketball team was in the midst of an 88-game winning streak, which started in 1971 and ended in 1974.

That record, the longest ever in college basketball, seemed unbeatable. But it’s going to end today.

At halftime, the University of Connecticut women’s basketball team–behind such stars as Maya Moore and Bria Hartley–has already scored twice as many points as Florida State University, leading 54-27. You think that FSU can catch up in the second half? No, I don’t either.

That means the UConn women will have won 89 games in a row, starting in 2008. They’ve also won the last two NCAA women’s basketball championships and are favored to three-peat in 2011. They won another five championships between 1995 and 2004.

There’s only one word for Coach Geno Auriemma’s team: Dynastic.

If you follow women’s basketball, you’ll recognize the names of UConn alums such as Rebecca Lobo, Nykesha Sales, Sue Bird, Diana Taurasi, Swin Cash and Tina Charles, all who played or still play in the WNBA and/or on U.S. Olympic teams. But if you grew up in Storrs, CT–as did Ms. Blog editor Jessica Stites–they’re even more significant:

They’re literally the only thing that happens in town. The word ‘celebrities’ is not enough–they are minor deities to us. I freaked out when I saw Rebecca Lobo at Willington Pizza once.

Basketball afficionado and president of the U.S., Barack Obama, is definitely on the UConn women’s bandwagon as well. He calls the squad “the best team in all of sports, any sport, any gender, by far.”

What’s especially sweet about their record-setting win streak is the attention it’s drawing to women’s basketball. As USC professor of sociology and gender studies Michael Messner points out in the upcoming issue of Ms. magazine, “Local media are nearly silent on my favorite sport, women’s basketball.” But even the Los Angeles Times gave substantial space to “the streak” this week.

So we love UConn for their mad skills, discipline, teamwork, individual talent and ability to draw the spotlight. In fact, Ms. intern Kyle Bachan just informs me that Maya Moore is currently “trending” worldwide on Twitter, and UConn is trending in the U.S!