Why I Am Marching for "Ayiti Cherie" (Beloved Haiti) - Ms. Magazine
Skip to content 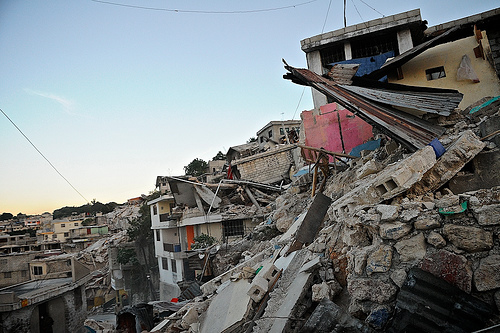 There are many ways I could commemorate the one-year marker of the devastating earthquake that paralyzed my birth country–memorial masses, breakfast meetings, candlelight vigils, symposia—but I’ve decided to go to New York City and join Marching for Change. Initiated by a slew of organizations concerned with the welfare of Haiti’s people, the gathering is set to begin at 2:30 p.m. in Times Square, stopping at the Haitian consulate (39th & Madison) and finishing at the United Nations.

I am marching because I am a member of Haiti’s large diaspora. We are what is known as the Tenth Department–the one million plus who have made our homes elsewhere–lot bo dlo, on the other side of the water, as some folks at home would say in Kréyol. With the exception of Antarctica, we are everywhere. We have a notable presence on this continent, in South America, in Africa as well as in Europe. Our numbers may be infinitesimal in Asia and Australia but we are still there–nou la.

We are migrant farm and factory workers, dishwashers, nannies, nurses, doctors, professors, students and artists of all kinds. We come in various shades, classes, political affiliations and sexualities, and observe an array of religious practices. In spite of simple narratives that tend to reduce us to singular notions, we are and have always been plural. That said, we have a history of discord and dissidence within our communities. Our tendency–as our national motto, “l’union fait la force” (strength in unity), declares–is to bond and become a force. In the past, we have done so to oust our enemies. (In the new issue of Ms. magazine, I write about the enemies Haiti has long faced, from without and within, and the hope now arising from women at the grassroots.)

I am marching because both insiders and outsiders with intimate knowledge of our country’s extremes know that change will not come to Haiti without conscious and radical approaches. Otherwise, Haiti’s future will abound with more man-made disasters. Nou rété, nap gadé–we wait and we watch.

I am marching because we have not been idle as we waited. We initiated, organized and participated in fundraisers, medical missions, workshops, academic conferences,  poetry readings and other performances. They rallied us to do whatever we could and to (re)consider committing to our Ayiti chérie–beloved Haiti. These moments gave us new opportunities to face each other and become reacquainted with our differences.

Truth be told, for every genuine effort that was made to bring quick relief to those Haitians in desperate need and to help sustain fractured communities, there were too many ready to position themselves for the windfall to come. They saw opportunity in the disaster and took it, with Haiti becoming a free-for-all.

I am marching because, in spite of our divisions, for many of us this has been a year in limbo. A year of living with the awkward privilege of being so far away from the devastation. A year of not knowing what to say anymore when we make periodic calls to loved ones left behind. As Wilbert Lafrance writes in his poem “Kouman,”

Inside my heart is just like Léogâne [where 80 percent of the city was destroyed].

Alas! I am tired of saying poor thing.

A litany of poor thing that will never end.

I am marching just days before Martin Luther King Jr.’s Day because, as the great doctor said, “Injustice anywhere is a threat to justice everywhere.”

I am marching to represent those whose images have been plastered all over the world but still remain invisible.

I am marching because this litany could end if the international community didn’t continually undermine our sovereignty.

I am marching because NGOs, for all the good that some of them do, still need to be coordinated.

I am marching because the Haitian government must be accountable to the entire nation.

I am marching for all those united against gender-based violence.

I am marching for the many who are  still entrapped in trauma.

I am marching for every young person in the country who has a dream and should see it realized.

I am marching because thousands of us have marched before in New York and have been effective.

I am marching because Haiti needs all of us.

Finally, I am marching because at 4:53:10 p.m. last year, when the earth cracked open, Haiti once again was being asked to cause changes in the world. What’s at stake this time is the unfinished business of The Revolution–recognition and uncompromised acceptance of our humanity.