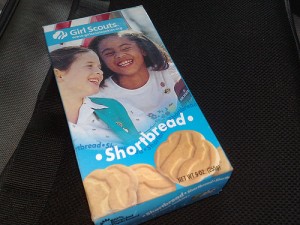 I was an active Girl Scout through third grade, and I hated almost every minute of it. I hated being told what to do, so I hated the uniforms and the badge-earning activities, and I just wasn’t touchy-feely enough to enjoy the singing or promises of friendship forever. My mom forced me to stay enrolled in a troop until high school graduation, but from the age of nine I did not go to meetings or earn a single badge. However, when Girl Scouts come around my neighborhood (or, more commonly, when the solicitation emails from old babysitting clients and family friends flood my inbox), I pay $4 a box for some Thin Mints or Samoas. While I may have hated being a Girl Scout, I love the Girl Scouts.

How could I not? Girl Scouts gets right what everything else seems to get wrong. It has an official policy of nondiscrimination [PDF] (unlike the Boy Scouts). It fosters leadership, individuality, teamwork, service and both physical and intellectual achievement. Girl Scouts actively supports racial and ethnic diversity, and as early as 1956 Martin Luther King, Jr. described them as a “force for desegregation.” Every year, Girl Scouts celebrate “Thinking Day,” when different troops represent different countries and learn about cultures around the world.

Admittedly, badges once skewed toward typically gendered activities such as cooking and sewing, but today girls can earn patches by learning about aerospace technology, conflict resolution and archery. Scouts also toughen up by going camping (I still remember learning how to build a fire at the tender age of 7, all the while complaining bitterly about how cold I was).

Girl Scouts talks about sex and puberty—perhaps in a more informed way than some of the school systems do. It fosters an environment for girls to learn who they are and what they are capable of: 55 percent of Girl Scouts believe they have a high chance of becoming President, as opposed to only 35 percent of non-Girl Scouts. More than 50 million women in the United States can call themselves Girl Scout alumnae, including former Supreme Court Justice Sandra Day O’Connor, Ms. founder Gloria Steinem and CBS Evening News anchor Katie Couric.

Miss America might claim to recognize scholars but Girl Scouts creates them. And if all that is not a good enough reason to shell out four bucks for a box of cookies, how about this: They’re absolutely delicious.