Can You Promise It Gets Better? - Ms. Magazine
Skip to content 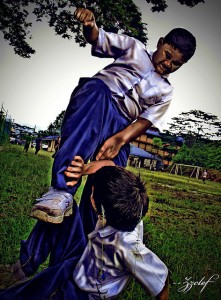 In President Obama’s “It Gets Better” speech—released this fall after the suicides of Tyler Clementi, Seth Walsh, Asher Brown and others—the President deplored teenage bullying and promised adult protection for struggling gay and lesbian youth. The President said,

To every young person out there, you need to know that if you’re in trouble, there are caring adults who can help.

A recent study published in the journal Pediatrics, however, suggests that these “caring adults” are too often part of the problem.

From school administrators to police, social workers to juvenile judges, some adults who work with teenagers seem to enact their own insidious type of bullying—one that trades schoolyard taunts for suspensions, arrests and juvenile court convictions.

The study found that schools and police are up to three times more likely to punish gay, lesbian and bisexual teenagers–especially the girls.

Based on a sample of 15,000 teenagers surveyed three times over an eight-year period, the study matches sexual orientation with punishments like school expulsion and court convictions and crimes like drinking alcohol, selling drugs, stealing and using weapons. The results: LGBTQ teens aren’t acting out more than their straight peers, but they are being treated as if they are.

While LGBTQ teens were slightly more likely to engage in petty crimes (lying to parents, shoplifting) they were less likely to commit serious or violent crimes. Even so, lesbian and bisexual girls were twice as likely to be convicted in juvenile court than their straight peers.

Researchers Kathryn Himmelstein and Hannah Brückner utilized data from the National Longitudinal Study of Adolescent Health to analyze the relationship between punishment and sexual orientation. The study did not extend to transgender youth, although Himmelstein notes that additional research is imperative because other studies suggest [pdf],

Transgender individuals are at particular risk of discrimination and victimization within the school and criminal-justice systems.

Himmelstein has an interesting hypothesis as to why LGBTQ teens are inequitably punished. She suggests that the institutional bias might lie in discomfort and suspicion of individuals who deviate from “normal” gender roles, writing: [pdf]

Because many nonheterosexual people are gender-nonconforming … the results of this study suggest that non-normative gender identity might contribute to sanction disparities.

If so, this is a stunning example of French philosopher Michel Foucault’s theory that sexuality is shaped, controlled and regulated by the state. Foucault theorizes that the modern state uses both real repression (punishment) and discursive repression (language) to make bodies and sexuality “the object[s] of a political strategy, of a general strategy of power.”

Or, as feminist theorist Rey Chow writes in “Poststructuralism: theory as critical self-consciousness”:

Not only man’s mind (or speech) but also his entire body … is shown to be subjugated to systemic means of regulation, training, enhancement, punishment, correction and elimination.

Thus, teens who are “gender-nonconforming”—whose bodies and sexualities rebel against the state’s “political strategy”–may be subjected to  systematic punishment. Girls are even more likely to be targeted because the feminine body has been manipulated to be inextricably linked with sexuality. (Just check out any American Apparel ad for proof.)

This all sounds a bit like a conspiracy theory out of 1984, but remember that these processes work on the subconscious level. Adults who are more likely to punish LGBTQ teens aren’t evil machines of the state. Instead, they—like all of us—have been conditioned to fear, suspect and, yes, punish non-normative bodies and behaviors. On the high-school level this social conditioning is expressed as bullying; on the adult level, it becomes institutional discrimination.

So, before telling LGBTQ teens that “it gets better,” let’s first consider what we must unlearn to keep that promise.