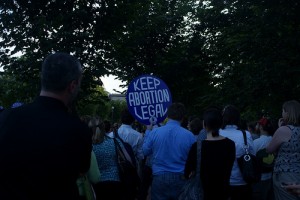 Former Kansas Attorney General Phill Kline is under investigation for ethics violations stemming from his politically driven inquisition of Dr. George Tiller, a Kansas abortion provider and doctor who was murdered in 2009. In 2004, Kline subpoenaed 90 unedited medical records of patients of Tiller and of an Overland Park Planned Parenthood clinic. Tiller’s attorneys appealed to the Kansas Supreme Court and the Court ruled that Kline could receive 60 records as long as non-relevant information–such as identifying personal details–was redacted.

In testimony before the Kansas Board for Discipline of Attorneys, Kline said that he was using the files to try to find evidence of girls having abortions at the two clinics, and proof that Tiller and Planned Parenthood had failed to report sexual abuse of children, as required by Kansas law. One of the allegations against Kline, however, is that in 2005 his staff recorded license plate numbers of visitors at Tiller’s clinic and then subpoenaed guests’ names from a hotel where his patients often stayed–in essence un-redacting the redacted records and attempting to uncover the names of Dr. Tiller’s adult patients.

The allegations against Kline also include charges that he mishandled medical files, misrepresented information presented to a Johnson County grand jury investigating Planned Parenthood and used data that he and his staff knew to be flawed when justifying his investigation to a judge. Kline is also being questioned about his 2006 appearance on The O’Reilly Factor after being warned by the Kansas Supreme Court to avoid publicity regarding Tiller. In the segment, Bill O’Reilly referred to Tiller as a “killer.”

If the panel of three attorneys finds Kline in violation of ethics rules, the Kansas Supreme Court will decide his punishment, which could range from censure to disbarment.