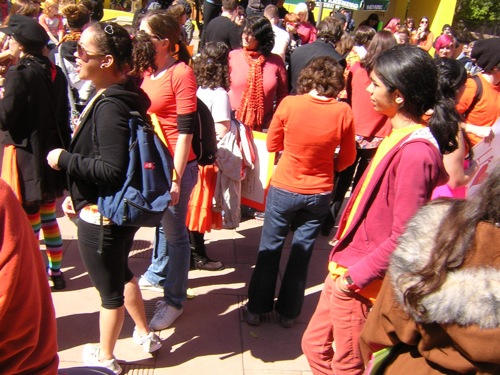 As we’ve seen the impact that social media has on democracy movements across the Middle East, we’ve wondered whether it can happen here. It has.

Hundreds of women and men from all over metropolitan Los Angeles showed up downtown in Pershing Square on Saturday Feb. 26, to Walk for Choice. They were brought together by Facebook, tumblr, emails and other online networks, and they turned out in droves. Everyone was prepared for showers and cold weather, but the forecasters got it all wrong. As the sun shone brightly, people peeled off layers of rain gear, scarves and gloves as they walked and chanted in support of reproductive rights.

Because MoveOn.org had called for a rally in support of Wisconsin’s workers at the same time, the Walk for Choice organizers planned a route that would allow pro-choice supporters to join the MoveOn rally at City Hall. As they approached the labor rally already in progress, they shouted “Pro-choice, pro-union!” and were greeted with cheers of solidarity.

I’ve lost count of the number of pickets, demonstrations, protests, marches, rallies, walks and sit-ins in which I’ve participated over the years, but it’s always a thrill to be in the middle of people who feel the same way you do. I’m always asked about the number of people who show up. My usual line is “Somewhere under a million. But it’s the quality that counts.” This was no exception.

This Walk for Choice was organized by a single blogger, Raven Geary of Chicago, and its success is a testament to the power of the Internet. It did happen here and it’s only the beginning. If you missed the rally, you can still be involved by signing this open letter to Congress.

Photos by the author.