On March 8 in Italy, A Man Gave Me Flowers - Ms. Magazine
Skip to content 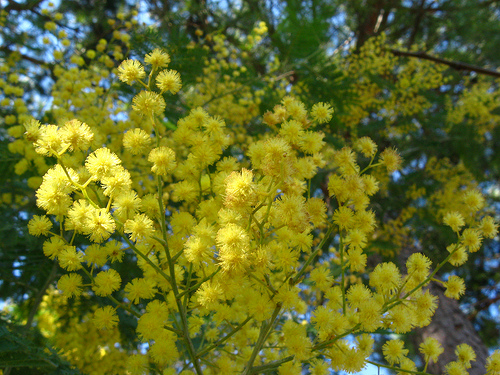 Seven years ago, on March 8, I was standing on a cobbled street in Milan when a man ran up from behind me shouting, “Bella donna! Bella donna! Momento!” My Italian was negligible, but I understood the request for a moment of my time. When I turned I saw a middle-aged Milanese man kneeling in the street with a bouquet of yellow mimosa flowers.

And I realized why, for hours that morning, I had seen flocks of well-heeled women throughout the city carrying the same smiling yellow flowers swathed in protective plastic shells. It was International Women’s Day, celebrated ever-so-publicly with that tired gift of thanks traditionally given to women who properly execute “femininity.”

Giving mimosas on March 8 is an Italian tradition. But I couldn’t help but wonder: Did these flowers celebrate empowerment and gender equity? Or were they just another chauvinist chivalry? I admit, I loved receiving them. I even stowed them away in my luggage and smuggled illegal plant life into Canada just so I could show my Mom.

But in famously chauvinist Italy, receiving flowers was another reminder of how far women have to go before real equity is achieved. It’s meaningless to dedicate one day to “celebrating women” when, for the other 364 days of the year, the head of the nation is busy entertaining teen sex workers and “honoring” women parliamentarians by remarking on their good looks and ignoring their political performance.

In that context, giving mimosas isn’t exactly a feminist gesture.

To be sure, Italian women aren’t sitting around sipping red wine while their Prime Minister systematically undermines their human rights. They have risen up, continue to rise and are fighting for respect and dignity. But women globally still face egregious inequities in politics, in the home and at work. Though many women have moved to jobs outside the home, those non-traditional positions often include hazardous working conditions and inescapable sexual violence–like the conditions for the 70-percent-women population of international flower farm workers.

Non-traditional work for women means fighting an uphill battle, and giving flowers doesn’t make it any easier. So this year on International Women’s Day, and as a birthday present to the Ms. Blog (we’re turning one!), we’re asking you to sign this petition demanding fair and healthy working conditions for flower farm workers.

Have a Happy International Women’s Day, and make the fight for women’s rights a goal everyday!