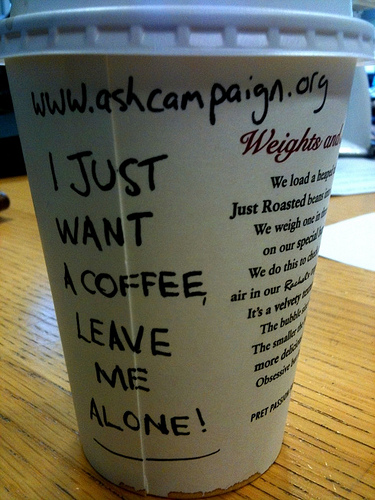 During a recent warm spell across the United States, I immediately noticed an increase in Tweets and Facebook posts about unwelcome catcalls. I experienced it, too. On the warmest day I wore shorts during my daily run and men in a car whistled and hooted at me. Until then, weeks of cold had kept car windows up and harassers silent.

I regularly read and listen to women’s street-harassment stories. Some days I live through my own. The warm spell reminded me how many more stories Spring will bring, and I find that unacceptable. Spring is no excuse for street harassment.

I’m organizing the First Annual International Anti-Street Harassment Day on March 20, the first day of spring, and I hope you will participate. My goal is to encourage people to break the silence around street harassment and bring more attention to this pervasive problem.

As of this writing, 550 people in at least 15 countries plan to participate. Most participants will talk about street harassment with friends and family. Quite a few people are organizing community action.

“Sasha,” an employee at an NGO in Cairo, Egypt, for example, was the first person to eagerly write to me asking what she could do. Now she’s brainstorming plans for March 20 with HarassMap. Sasha said she wants to participate because,

Egypt is a new country now and women have to get their rights back … we want to make every Egyptian know that harassment has to stop.

Even though there may be snow on the ground in Saskatoon, Saskatchewan, Canada, on March 20, activist Rebecca Geisler is determined to take action. “Street harassment is a huge problem here … and I’m hoping to open up a greater public dialogue about it and make the voices of those it affects heard.” She’s recruited 14 people to walk through areas of their city where street harassment is most prevalent, handing out flyers and sharing stories.

In Washington, DC, HollaBack DC! and I are organizing a community safety audit to brainstorm ways to make the city more inclusive and safe (and we need more volunteers). Dienna Howard, who works in the city, says she plans to participate because,

I don’t feel as free to walk down the streets …  because of the constant harassment, and I want to work towards making the streets safer in my lifetime.

Several new HollaBack groups are excited to take action. In Atlanta, Ga., they’ll survey commuters. In the Czech Republic, they’ll hold an informal discussion with friends and family. In Mexico City and Ottawa they’ll tweet and blog. And in Baltimore, Md., they’re holding a community event where people can share stories and learn self-defense.

On my website, you can find 10 ideas for action. If you decide to participate, please:

Whether you reach one person by sharing a story–or you reach a community by writing an opinion article, organizing an event or passing out materials–your actions matter.

Watch this Ms. Foundation for Women video with Hollaback! founder Emily May to learn more about the group’s global work: