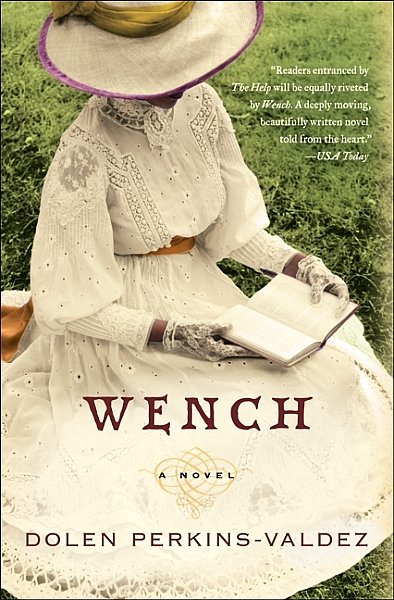 What is a “wench” anyway? Does a sultry, Shakespearean woman in a bodice come to mind? According to two of its  definitions, a wench might be either: “a girl, maid, young woman; female child” (1290); or more pejoratively, “a wanton woman; a mistress” (1362). Now consider another, uniquely American usage: “A colored woman of any age; a negress or mulattress, especially one in service.” (1832).

This last disturbing definition was the inspiration for the provocative title of Dolen Perkins-Valdez’s historical novel, Wench. The term, the author explains, was often used in reward posters to refer to fugitive female slaves. Implicitly, the label also perpetuated the antebellum stereotype of black women as hyper-sexualized seductresses.

The history of Wench‘s setting is no less shocking than its title. The novel takes place in Ohio, at the site of Wilberforce University, the first college to admit African Americans. However, during the decade before the Civil War, a different structure stood on these grounds–Tawawa House–an infamous resort where vacationing white Southern men were known to bring their enslaved black mistresses. Intrigued by her research on Tawawa, Perkins-Valdez imagines the lives of four black women brought to this estate in the 1850s. With freedom tempting them from just beyond the resort’s boundaries in the surrounding free state, what choices would they make? Risking escape might mean abandoning the children they conceived with their masters. What other ties might hold them back?

By examining the complexity of sexual relations within the imbalanced power structure of slavery, and by confronting seduction, rape, torture and miscegenation head on, Wench explores aspects of slavery largely omitted from surviving historical records. Well-intended abolitionists, as well as pro-slavery advocates, both tended to paint simplistic pictures of enslaved women to fulfill their respective agendas: Abolitionists often desexualized the women they wrote about to render them more sympathetic to their white religious minded readers; proslavery advocates frequently depicted them as irredeemably promiscuous to justify their subjugation. Wench, however–written in lucid and unflinching prose–presents a counter-memory to historical misrepresentation that is at once nuanced, harrowing and hard to turn away from.

I spoke with Perkins-Valdez  on a February afternoon at Santa Monica Public Library before she gave a talk about her best-selling debut novel.

Ms. Blog: Wench reveals how the institution of slavery ultimately degrades the oppressor as well as the oppressed. In your novel, you explore the feelings of Drayle, the master who fathers children with his slave, Lizzie, and of Fran, Drayle’s neglected wife. You show how alienating their marriage has become because of this arrangement. What was it like to imagine these characters’ motivations?

Dolen Perkins-Valdez: The most difficult thing about writing a novel like this was writing about the complexity of the people of that era. No one was all good and no one was all bad. People were and are complicated, and one of the things I found in writing this book was that because we’re talking about such a complicated time, every one of the characters wanted to take over the book, to take center stage. I felt their pull–you know, let me do more with Drayle, let me do more with Fran, let me do more with Mawu, but I tried to stick with Lizzie, who is my main character and whose personality I wanted to explore from the very beginning.

What made Lizzie your main focus?

I wondered if it was it possible for a slave to be in love with her slave owner, and she was the character through which I could explore that question.

In her non-fiction study, Ghosts of Slavery, UCLA professor Jenny Sharpe discusses some of the opposing stereotypes of enslaved black Caribbean women that appear throughout the literature of their time, including “the evil Obeah woman vs. the Loyal Mammy; the Sable Venus vs. the Noble Savage; and the foul-mouthed whore vs. the high-minded Christian woman.” While researching Wench and creating its complex characters, did you encounter similar tropes in the histories?

I didn’t see these stereotypes because there was very little left behind by the Southerners even saying that they took the women to Tawawa, so all of my characters were purely imagined. But I’m aware of these stereotypes from reading American slave narratives–there were these types of conventional characters that one saw over and over again.

With so little written about this, how did you research what occurred there?

Well, it was oral–something that the locals knew.

So you went to Ohio and interviewed locals?

Yes, many of the early students at Wilberforce were biracial–the sons and daughters of southern men and their enslaved mistresses. The fact that the men were there with those women was something known by those people, but not something they wrote down. So a lot of the evidence was circumstantial and came from people who knew people claiming to be descended from those unions.

It can be difficult to discus agency with regard to enslaved women, because slavery severely limited their choices, but your characters do consider resistance through measures that might induce miscarriage or cause sterility. They also must decide if they are willing to risk escape, which would mean leaving their children behind. What was it like to write about some of these wrenching choices relating to children and childbearing?

In some of the original slave narratives I read, motherhood is a huge issue and it’s the reason why more male slaves escaped than female slaves. Only about 12 percent of the published narratives of escaped slaves were by women. This isn’t the exact amount who escaped, but it gives an indication. Male slaves could leave their children more easily. I knew in writing this book I couldn’t ignore the issue of motherhood for these women; I think becoming a mother helped me to understand how difficult it must have been. The thought that if you had a child who could be sold away from you I think would create a kind of complicated relationship between mother and child. When you love a child but 1) you can’t protect your child, and 2) you don’t know if your child will be sold from you, you would try to figure out a way to make sure that didn’t happen. But if it did, you would have to find a way to survive despite that. I know that it’s hard for us in contemporary society to understand, but I do think we can get an idea of how heart-wrenching that must have been.

You have a four year old daughter–how old was she as you were writing this book?

I was writing Wench, and almost done when she was born.

Did being a new mother inform your thinking as you wrote?

I think it helped me as I revised the book. Who knows what motherhood is really like until they have a child? Even if you have a child that isn’t yours biologically, but whom you are responsible for protecting, you can really get what it must have felt like to be unable to protect that child.

What’s next for you? Are you writing another novel?

Yes, a historical Civil War novel–but it’s not a sequel!

Visit here for more about Wench and other book signings.

Ghosts of Slavery: A Literary Archaeology of Black Women’s Lives, by Jenny Sharpe. A compelling non-fiction study of three Caribbean women: a maroon leader, a biracial concubine and a fugitive slave. Sharpe incorporates research from non-traditional sources, including oral stories, slave songs, travel diaries and court documents, to recover a more complex understanding of their lives than the often misleading histories of their time provide.

Incidents in the Life of a Slave Girl, Written by Herself, by Harriet A Jacobs. An autobiographical novel by one of the first black women to write a slave narrative. Using the pseudonym Linda Brent, Jacobs recounts her many hardships and the role her sexuality played in helping her achieve, “something akin to freedom”. Widely considered a feminist must-read.

Cambridge by Caryl Phillips. A postmodern novel set during the 19th century on a West Indies sugar plantation. The story juxtaposes two first-person narratives, one from the master’s daughter and one from an educated male slave, with a third-person epilogue. These conflicting accounts disrupt our sense of what is truth and what is fiction to expose the cruelty and hypocrisy of slavery.

Wide Sargasso Sea by Jean Rhys. Set amid the cultural shifts occurring during the decolonization of Jamaica, this counter narrative retells Bronte’s classic Jane Eyre from the point of view of Antoinette, the allegedly “mad” Creole wife whom Rochester has renamed Bertha and locked in his attic.

Beloved by Toni Morrison (Knopf, 1987) The emotionally intense story of an escaped slave, tormented by her memories of what she did to prevent her daughter from living a life of slavery.