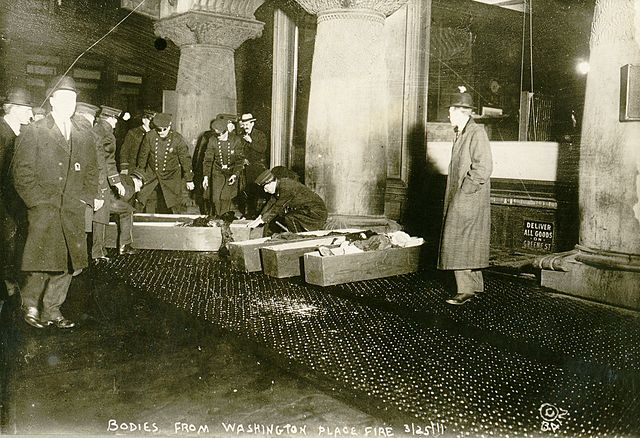 This month marks the 100th anniversary of the worst industrial disaster in New York City history: the Triangle Shirtwaist Factory fire. One hundred forty-six young women lost their lives, a few as young as 14. Some burned to death. Others jumped nine stories rather than perish in flames. The garment sweatshop workers were trapped in the building near closing time because the factory owners, concerned about theft, had locked the doors.

The women who died that day were immigrant women, mostly Italian and Jewish. Their turn-of-the-century sweatshop required of them long hours in return for low pay, crowded and unsafe working conditions, and very few labor protections. Two years before the horrific fire, Triangle Factory workers began to organize, staging an impromptu walkout and sparking a 14-week strike—known as the Uprising of the 20,000. They won a 52-hour work week and higher wages, and the following year an even larger strike gained union recognition for most garment workers in New York City.

In the aftermath of the fire, the factory owners were tried, but found not guilty of any wrongdoing. Nonetheless, graphic images of the tragic fire and the young women who lost their lives led to the formation of a citywide committee that recommended new regulations governing safety and working conditions in the city. It was a turning point that alerted the public to the perils of unregulated sweatshop labor.

Perhaps what is most alarming on this centennial of the Triangle Factory fire is to see a resurgence of sweatshop labor throughout the U.S. Those workers are still largely immigrants—now from places like Thailand, China or Mexico—who produce clothing. They still are still young women. And they still labor under brutal conditions for meager wages. In 2009, the New York State Department of Labor raided one Manhattan sweatshop accused of failing to give workers adequate breaks or pay them overtime for work that likely totaled up to 80 hours a week.

The resurrection of sweatshops is a deliberate strategy by corporate leaders to reduce labor costs and increase profit margins. Large retailers contract production to the lowest-bidding subcontractors, thus relieving themselves of all responsibility for pay or working conditions under which their garments are made. The Department of Labor estimates that half of all garment contractors don’t pay minimum wage, two-thirds don’t pay overtime and one-third are guilty of serious health and safety violations.

In light of these modern-day sweatshops, the most appropriate commemoration of the deaths of the 146 young women who worked at the Triangle Shirtwaist Factory might be a commitment to end the kind of labor that led to their deaths. Perhaps that would take another uprising of 20,000.

Photo of bodies from Triangle Shirtwaist Factory fire being put in coffins from Wikimedia Commons.