Witness to Rape: The Resistance of Eman al-Obeidi - Ms. Magazine
Skip to content 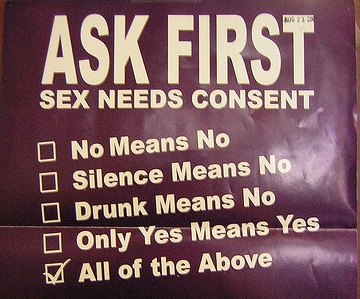 Most of all, I saw resistance.

By now, millions have seen the video footage of a woman in Libya–identified as Eman (or Iman) al-Obeidi–storming into a hotel in Tripoli, where foreign journalists had gathered, to tell the world that she had been gang-raped by Gaddhafi’s militia men at a checkpoint.  And now that her words have been uttered, there is no turning back, nor can we ignore our own gut reactions to the charge.

Those of us who know anything about state violence and wars are not taken aback by such a violation so much as we are stunned that a rape victim living in a repressive state during war and civil unrest could transcend her rape and refuse to suffer in silence. She burst onto the international scene and shouted for us all to hear: This is what state (and gender) oppression looks like, and here is my body to prove it.

Neither is it surprising that government officials–represented by the minders, who literally gagged her and tried to render her silent, while also doing what they could to suppress journalist cameras and microphones–were quick to label her “insane,” then later, a “prostitute,” as if sex workers have no rights or honor to defend. But what will be telling in the days ahead is whether we, the international audience who witnessed this turn of events, will let such government spin dictate our own moral and ethical response. (Witness the victim-blaming response to Lara Logan’s rape allegations during the Egyptian Revolution last month.)

Right now, conflicting reports abound. Officials claim that the woman is with her family, while Amnesty International is demanding that she be produced before the world so that we can all be reassured of her safety.  Considering that the world now knows this woman’s name, will Libyan officials brazenly “disappear” her?

As we serve as witnesses to this case, it would be easy for us, here in the U.S., to make the assumption that rape as an act of state terrorism is an anomaly that only occurs under repressive governments such as Gaddhafi’s.  However, it was not that long ago when here in this very country, we were all too tolerant of such acts when they were visited upon a marginal community. A truly eye-opening and mind-blowing new history book by Danielle McGuire–At the Dark End of the Street: Black Women, Rape, and Resistance–dares to rewrite the history of Civil Rights, recasting it as a movement prompted by black women’s collective struggle against sexual violence as a tool of racialized state terrorism during the Jim Crow era.

How many of us were aware that Rosa Parks was a militant anti-rape activist well before she defiantly refused to give up her seat on a segregated bus in 1955?  How many of us could even understand the inevitable threat of rape–which many whites were empowered to perpetrate with impunity in those days–that loomed over Parks when she was arrested that fateful day?

How many of us know of Parks’s involvement in the case of Recy Taylor, who was viciously gang-raped at gunpoint and then, when she and others in the black community tried to seek justice for her, dismissed as a “prostitute” (sound familiar?) Justice still eludes Taylor today: The state of Alabama has yet to issue an apology.

Even today, so many experience rape as an act of terror on the most personal level, and worse, some of our communities respond to such brutality in similar ways as Libyan officials: Witness the horrific reaction to a gang-rape in the small town of Cleveland, Texas, which was quick to vilify an 11-year-old victim.

I am deeply concerned that our brave and courageous survivor in Libya will “disappear” if we don’t keep up the international pressure to seek justice in her case. I am especially concerned about such disappearances because here in our own country we have a vibrant history of many rape survivors whose very refusal to be silent in the face of racial terrorism launched us forward with the Civil Rights Movement.  And yet, look how that history had “disappeared” from our public record. Or, more importantly, look how Rosa Parks’s own legacy was rewritten so that her resistance against rape was also “disappeared.”

From the moment of breaking the silence, the rape victim becomes a rape survivor and an anti-rape activist. It is now up to the rest of us to witness her survival and seek justice on her behalf.