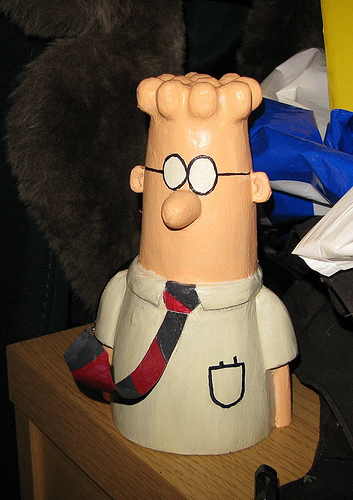 This week, Dilbert creator Scott Adams managed to offend both feminists and anti-feminists with a “satirical” blog post on the all-too-real Men’s Rights Movement. If you haven’t heard about the uproar, get filled in here and here; if you’re confused about “men’s rights” (and it’s easy to be), Salon.com has a great interview with Ms. blogger, sociology professor and expert male feminist Michael Kimmel about the movement, where it came from and where it’s going.

The second alleged gang rape of an 11-year old in as many weeks gave the mainstream media a second chance to cover child rape without victim-blaming; unfortunately, they failed again. In response, Salon’s Tracy Clark-Flory takes a sane look at child gang rape cases.

Last weekend, a New York Times “Sunday Styles” profile of four young white male progressive bloggers titled “Washington’s New Brat Pack Masters Media” drew widespread criticism, the general reaction falling somewhere between outrage and disgust. If you haven’t read the piece, and you really should if you can stomach it, find it here. Then, read Ann Friedman’s fantastic parody piece. Next, check out just a few of the rebuttals, from Sarah Seltzer at The Sisterhood, Betsy Rothstein at Fishbowl DC and finally from Amanda Hess, who spoke with Sridhar Pappu, the author of the piece.

The disappointing Sunday Styles piece should not come as a big surprise considering the results of a new study from the International Women’s Media Foundation, which found that “the worldwide media industry continues to struggle with gender equality, with new research showing women are still underrepresented in the majority of newsrooms across the globe.” Read the full story at IPS.

From Colorlines: The same anti-abortion group responsible for billboards targeting African Americans has raised the bar. Now they’re saying we’re aborting the next Obama. Can it get worse? Wait, this just in–now they’re comparing abortions to the death toll from the devastating disaster in Japan.

Tiger Beatdown covers a recent study on the phenomenon of Women’s Police Stations in Latin America: unique, separate, women-staffed police stations whose main goal is to make visible violence against women as a public, collective and punishable issue. Can they help women access justice?

Speed for escaping chaperones. Less burdensome clothes for riding. At The Atlantic, Maria Popova reveals the bicycle’s little-known role in empowering women, and gives us the quote of the week:

To men, the bicycle in the beginning was merely a new toy, another machine added to the long list of devices they knew in their work and play. To women, it was a steed upon which they rode into a new world. – Munsey’s Magazine, 1896