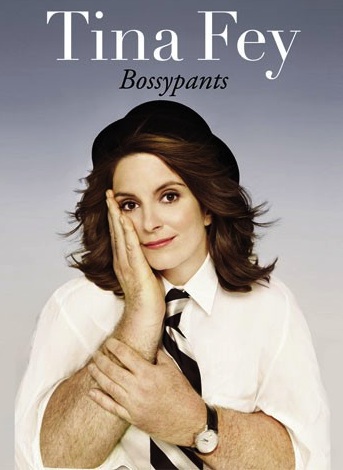 Tina Fey isn’t afraid to throw around a few F-words in her new memoir, Bossypants. She stands up for funny women, and says to those who don’t like–or believe in the existence of–women comedians, “We don’t fucking care if you like it.” Throughout, she makes clear that she views herself as a feminist and offers witty commentary on sexism in the workplace (it’s good to be a bossypants), double standards (they’re still with us) and the boys’ club of comedy writing (they pee in cups!).

In the introduction, Fey speculates on the various possible audiences for her book, one of which might be women who “bought this book for practical tips on how to make it in a male-dominated workplace.” Even though she’s being tongue-in-cheek–“No pigtails, no tube tops. Cry sparingly.”–she actually delivers sound advice.

She talks about the “institutionalized gender nonsense” she experienced when she was starting out as a comic with the influential Chicago improv group Second City and tells how “a director…once justified cutting a scene by saying, ‘The audience doesn’t want to see a scene between two women.'” Fey labels this type of bias as “The Myth of Not Enough,” the idea that there is a limited amount of space available for women and that there’s simply no room for more than X number of women in the workplace. Fey doesn’t believe the myth:

Fey is proud that during her nine years on Saturday Night Live, “the women in the cast took over the show … and I had the pleasure of being there to witness it.” Her proudest moment as an SNL head writer, she writes, was her successful fight for a parody of a Kotex commercial, written by Paula Pell. The script kept getting shot down as being “too difficult to produce,” and eventually Fey had “what Oprah would call an Aha Moment” when she realized that the men in the room “didn’t know what a maxi pad belt was” and that’s why they couldn’t get how funny the skit would be.

Fey addresses body-image issues (the scar on her face, her weight, aging) with amiable self-deprecation. The chapter in which she responds to nasty posts on celebrity-oriented websites illustrates perfectly how she uses humor to rise above the fray. One writer claims that Fey “completely ruined SNL” and that she “has not a single funny bone in her body.” To which Fey responds:

When I first set out to ruin SNL, I didn’t think anyone would notice, but I persevered because–like you trying to do a nine-piece jigsaw puzzle–it was a labor of love.

Fey devotes a chapter to her hilarious Sarah Palin impressions, reproducing the script of her debut Palin performance alongside Amy Poehler playing Hillary Clinton (writers will enjoy seeing the mark-ups). She highlights the stealth feminism in the piece:

The sketch easily could have been a dumb catfight between two female candidates. What Seth [Meyers] and Amy wrote, however, was two women speaking out together against sexism in the campaign. In real life these women experienced different sides of the same sexism coin. People who didn’t like Hillary called her a ballbuster. People who didn’t like Sarah called her Caribou Barbie. People attempted to marginalize these women based on their gender. Amy’s line ‘Although it is never sexist to question female politicians’ credentials’ was basically the thesis statement for everything we did over the next six weeks. Not that anyone noticed. You all watched a sketch about feminism and you didn’t even realize it because of all the jokes. It’s like when Jessica Seinfeld puts spinach in kids’ brownies. Suckers!

Fey doesn’t say overtly nasty things about Palin–no catfight in this book, either–but she does quip,

Politics and prostitution have to be the only jobs where inexperience is considered a virtue. In what other profession would you brag about not knowing stuff?

Like the pictures of Fey at different stages in life interspersed throughout–young Tina in a beloved white denim suit in the ’80s, an even younger Tina perched on her Dad’s shoulder at the beach–the book is by turns vulnerable and fierce. In its final chapter, Fey reflects on what she wants to do with her “last five minutes of being famous.” She notes that “women, at least in comedy, are labeled ‘crazy’ after a certain age,” and she frets about where her life will go now that she’s past the age of 40 (yet another F-word).

If Fey’s past is any indication of her future, she may very well end up crazy–like a funny, feminist fox.

Audrey Bilger is professor of literature at Claremont McKenna College and Faculty Director of the Center for Writing and Public Discourse. She also teaches gender studies, and occasionally yoga. Her latest book, which she coedited with Michele Kort, is Here Come the Brides! Reflections on Lesbian Love and Marriage (Seal Press, 2012). She is also the author of Laughing Feminism, editor of an edtion of Jane Collier’s 1753 satire An Essay on the Art of Ingeniously Tormenting, and a frequent contributor to Bitch magazine. Her work has been featured in The Paris Review, Rockrgrl, the Huffington Post and the Women's Media Center.

The Ms. Q&A: Susan Loewenberg on Feminism in the Theater

Black Feminist in Public: Veronica Chambers on the Power and Meaning of Beyoncé