The other day, @msmagazine received this response (left) to a tweet about sexual assault on college campuses–a topic we’ve been covering a lot lately in light of our “Click!” blog carnival, National Sexual Assault Awareness Month and Vice President Joe Biden’s recent announcement of a nationwide initiative to combat rape on campuses. Not to mention the brand-new investigative report on rape in the latest issue of Ms.

So, naturally, we clicked. And what we found was a frilly pink website devoted to selling underwear.

Needless to say, more explanation was in order.

Having high schoolers of our own, we realize that at one point or another, teenagers are going to want to date … We’ve decided there’s no reason to get uptight about it, after all, finding a romantic partner is a normal and healthy part of adolescent life. But, why not help our teens make wise choices while they navigate the dating scene? We created a line of underwear to use as conversation starters to help reinforce family morals as they relate to relationships and dating. One part Victorian (who are we kidding?), three parts frisky, these adorable undies put new meaning to saying it loud and proud.

What better way to reinforce family morals than by wearing underwear that doubles as a conversation starter, right? If the junior prom after-party starts to get dull, just take off your pants and encourage a dialogue! Awkward first date? Lift up your dress and ask for some feedback!

On the one hand, these panties were created by parents to encourage their teens to remain abstinent. On the other hand, these are panties. A strange choice of merchandise to hawk in the name of chastity.

Stranger still, these 75-percent “frisky” garments seem to be closely tied to a religious agenda. The very name of the line implies a Christian affiliation–subbing “your mother” for Jesus in the familiar WWJD. So what’s really going on here? Let’s take a closer look at some of the site’s offerings.

The messages on these panties–“Dream On,” “Zip It!” and “Not Tonight”–coyly indicate non-consent to a potential romantic partner. The marketing campaign confirms this: 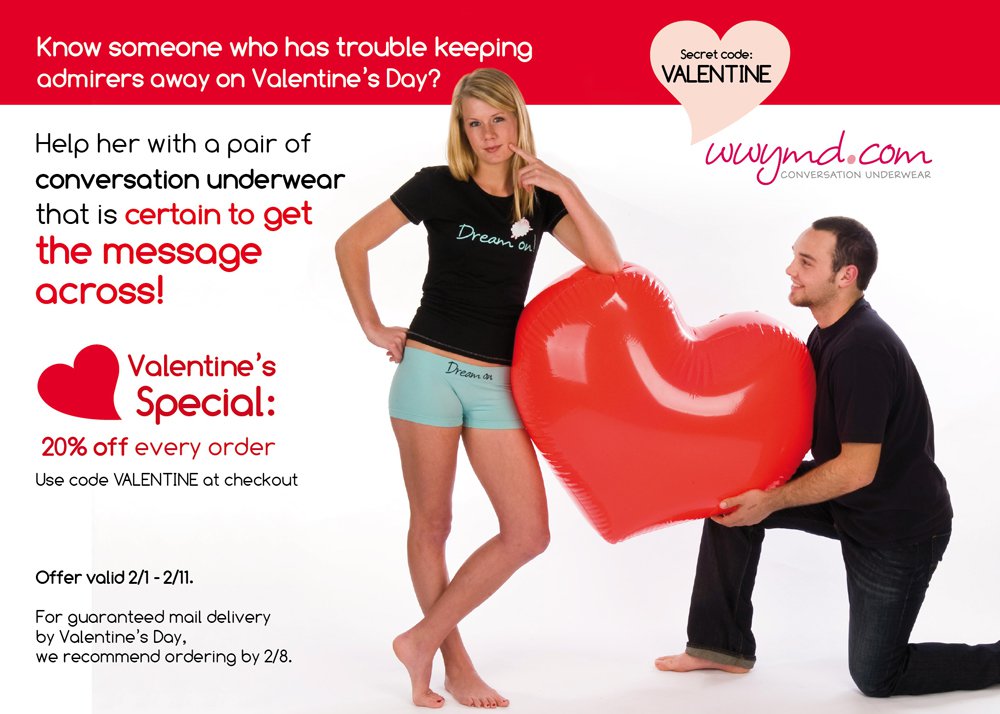 But the whole concept of abstinence-promoting underwear makes about as much sense as commemorating sobriety with flasks instead of coins at AA meetings.

It isn’t just dumb, it’s dangerous. There’s nothing wrong with encouraging your children to choose abstinence before marriage; there is something wrong, however, with not empowering them with the knowledge and tools to make that choice and confidently communicate it to romantic partners. Without pulling down their pants.

What’s more, the panties can really muddy the notion of “consent” in young people’s minds. What if a teen girl wears “Not Tonight” panties and decides at some point in the evening that she actually does want to have sex? Nothing wrong with that, but the dissonance between the panty-message and her ultimate decision may well reinforce the mistaken idea that “no means yes” in her partner’s mind.

This bizarre line of undergarments calls to mind what Jessica Valenti dubbed The Purity Myth in her book of the same name. In an interview, she argues that oversexualization of women in the media and pop culture has begun to intersect with the conservative movement, resulting in the fetishization of virginity:

If you are telling young women over and over that what’s most important is their virginity … then you’re sending the message that it’s the body and sexuality that defines who they are … With the virginity movement it’s adults–and a lot of men–deciding what appropriate sexuality is for younger women. It’s anyone and everyone except young women themselves defining (their) sexuality.

This is ridiculously displayed in WWYMD’s promotional videos, which feature abstinence-friendly songs and wind-blown girls posing suggestively in their skivies next to fully-clothed young men. Here are some of the choice lyrics:

No kiss, no touch, no makin’ out
hey, hey, hey, hey, hey, hey…
When men see a body like this, they have a tendency to dismiss
that I got anything upstairs, but I got me a lot of brains up there
…
Let me make it clear, so there’s no mistake
my life’s goin’ good, there’s too much at stake
to just hand it over, to any man…

Abstinence-promoting strategies as ineffective as these will certainly prove to be are, unfortunately, not unprecedented. Just last week it was reported that the Candies Foundation paid Bristol Palin more than $260,000 to be a pro-abstinence spokesperson–seven times the amount they spent on actual teen pregnancy prevention programs. With the rise of what’s been called the chastity-industrial complex, peddling purity is big business. Once again, social and religious conservatives say one thing, do another and wait for the money to roll in.

ABOVE, TOP TO BOTTOM: Screenshot of Twitter message, WWYMD logo, Items from WWYMD line, Promotional flyer from the What Would Your Mother Do? Facebook page.