Catholic Death Panels Coming to a Hospital Near You - Ms. Magazine
Skip to content 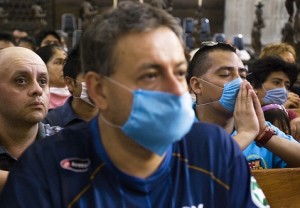 When you have a medical emergency, you want to get to the nearest hospital–fast. But if you’re a pregnant woman with a medical emergency, the nearest hospital may refuse to treat you if it’s Catholic-run. The medical personnel may have to let you die, because the U.S. Conference of Catholic Bishops–or as I’ve begun to think of them, the Catholic Death Panel–has ordered Catholic hospitals to deny women care they deem immoral.

It’s hard to believe, but administrators, physicians and nurses who work in Catholic health-care facilities have abdicated responsibility for their female patients to the 258 men who make up the U.S. Conference of Bishops. That group has decided that pregnant women aren’t patients–they’re merely incubators.

And if you’re not Catholic, you’re still subject to the restrictions placed on those hospitals. You will not be able to have an abortion, even if your life is at risk. You can’t receive emergency contraception if you’ve been raped. There will be no treatment for an ectopic pregnancy or an incomplete miscarriage. Contraception and sterilization will be out of the question.

If you live in a major urban area, you would probably choose a secular hospital if you want to avoid such restrictive care. But in some places, the only hospital around is a Catholic one. And in an emergency, you may  have no choice but to go to a Catholic hospital if it’s the nearest facility.

That would be quite all right with Rep. Joe Pitts (R-Pa). You may remember him–he and his pal, former Michigan Rep. Bart Stupak, almost derailed national health care reform last year with their anti-choice demands. Stupak’s no longer in the House but Pitts is, and he’s determined to force the Catholic Bishops’ will on Americans.

Pitts is the author of the H.R. 358, the so-called “Protect Life Act,” which refers not to the woman’s life, of course, but to fetal life. It’s an expansion of the “conscience clauses” that allow anti-choice doctors and nurses to refuse to provide abortion services. Pro-choice advocates are calling it the “Let Women Die” Act because it allows hospitals to refuse treatment to women who need emergency abortions to save their lives. The hospitals wouldn’t have to facilitate such women’s transfer to other hospitals, either.

Explains Molly M. Ginty in “Treatment Denied,” her article about Catholic hospitals in the new spring issue of Ms. magazine:

The U.S. Congress started to pass ‘conscience clauses’ pushed by the Roman Catholic Church and anti-abortion forces in the immediate wake of the Roe v. Wade Supreme Court decision that legalized abortion in 1973. Today, these laws apply not only to physicians and nurses who oppose abortion, but to the entire institutions whose ‘consciences’ allow them to withhold medically indicated care.

The “consciences” of those institutions means that the medically untrained 258-member  Catholic Death Panel will dictate what medical care will be provided in those facilities.

We’ve seen how one Bishop practices medicine. After a Catholic hospital in Phoenix saved a woman’s life by terminating her pregnancy, Bishop Thomas Olmstead severed ties with the hospital, stripping it of its Catholic identity and excommunicating Sister Margaret McBride, a member of the ethics committee. Excommunication is the severest form of censure the Church can impose, and Olmstead was letting all Catholic medical professionals know who was calling the shots about medical care in Catholic establishments.

If H.R. 358 passes, we can expect many more stories about women who’ve been denied medical services because a Bishop considers them immoral. And it’s not just abortion that will be withheld: According to Ginty, the Bishops have developed a whole list of reproductive health care services that are off limits, from in-vitro fertilization to vasectomies.

The  assaults on our reproductive freedom are sure to continue. The U.S. Conference of Bishops may not consider women’s lives important, but most people don’t agree. So we have to speak out loudly and often to expose their deadly misogyny.

Ginty proposes working at the policy level and on a personal level. After all, the life we save may be our own.