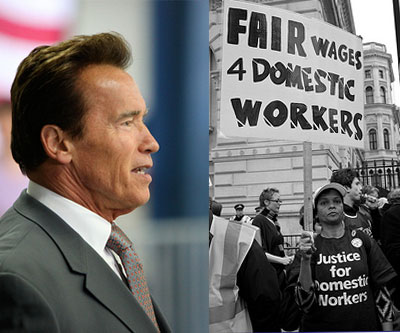 The media has been abuzz with Arnold Schwarzenegger’s “sex scandal”–the all-too-common story of a powerful man in an extramarital relationship that resulted in the birth of a child.

But what’s been little noted is the equally common power imbalance at play between Arnold and his housekeeper: He was her employer, she was a domestic worker.

Domestic workers labor in isolated environments–the ostensibly private space of a home, behind closed doors. The vast majority, as in this case, are immigrant women of color, who sometimes don’t speak their employer’s language, don’t know their legal rights (and have few legal protections) and often have few other occupational opportunities.

And those realities have made domestic work an occupation where sexual abuse is, and has been, rampant. Dating back to the era of slavery, household slaves were routinely raped by their masters. After the end of slavery, domestic work still carried powerful connotations of servitude that encouraged employers to conflate hiring an employee with purchasing their bodies. Although it is difficult to know the full extent of the current problem—most domestic workers are too afraid of losing their jobs to speak out publicly—there are numerous private discussions among domestic workers about the kinds of sexual assaults they have had to fend off or endure on a regular basis. These cases rarely make the headlines.

Domestic workers have little recourse to challenge abusive behavior. They are excluded from most workplace protections, including Title VII of the Civil Rights Act, which bans sexual harassment in the workplace. Those working in homes don’t have coworkers with whom to share their grievances, and have no union to protect them. In fact, domestic workers are denied the right to organize and bargain collectively because they’re excluded from the National Labor Relations Act—a product of racist legislation in the 1930s which sought to deny labor rights to African American workers. While domestic workers have organized historically, and are organizing today, to improve labor standards and protect their basic human rights, the vast majority of domestic workers remain vulnerable to a wide range of abuses.

Schwarzenegger has not been accused of anything illegal. But his cases have shone a light on all women domestic workers, and thus make us take stock of what we’re doing to ensure their safety and rights. It’s time to look behind those closed doors.

May 23-27 is a week of action for domestic workers in California. Today, May 25, Californians are urged to call their legislators to support a state Domestic Workers Bill of Rights like the one passed in New York. Make your voice heard!