Women of the Arab Spring - Ms. Magazine
Skip to content 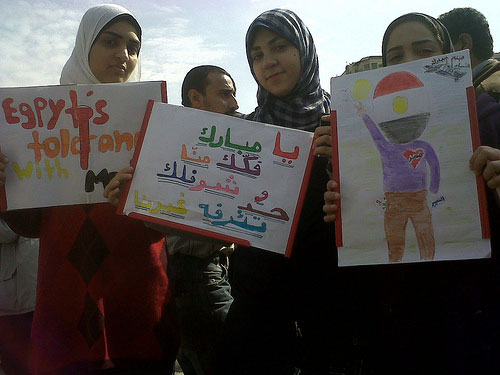 The Middle East’s pro-democracy uprisings may well be the latest in a long line of gifts (algebra, soap, even the fork) that Arab civilizations have given the world. Yet one might think only men were risking, and sometimes losing, their lives in these protests—and definitely leading them.

But women were (and are) involved at every stage, including leadership. This doesn’t surprise those familiar with Arab feminism, since women have been the most consistent advocates of civil society across the region. In most of these countries women suffer from such discriminatory legislation as “guardianship laws,” which imprison them in the status of minors, so they’re well aware that “democracy” for half the people isn’t democracy. But they also have reason to be wary about how male-defined revolutions betray women.

Western instances of this abound, but a notorious Arab example is fitting. During the Algerian revolt against French colonialism, women fought and died beside men in the underground, certain that their own future equality was at stake. But with independence won, their “revolutionary brothers” sent them back to the kitchen.

So it’s crucial to document the vital role women play in these uprisings, and how they’re planning to ensure that in post-revolutionary and transitional periods they (and democracy) won’t be double-crossed again.

Each country’s situation is volatile and different, and Ms. will stay with the ongoing story. This report will focus on Tunisia and Egypt, the two “post-revolutionary” states as of this writing.

Tunisia, where the ferment began and the “Jasmine Revolution” toppled President Zine el Abidine Ben Ali, demolishes stereotypes. In the country’s (relatively) progressive, secular society, women have had access to contraception since 1962 and abortion since 1965—eight years before Roe v. Wade. After independence from France in 1956, the government abolished polygamy and legislated women’s equality in marriage, divorce and child custody. Later, a minimum marriage age of 18 was established, as were penalties for domestic violence. Still, daughters could inherit only half of what sons could, and a husband could hold property a wife acquired during marriage.

So Tunisian women, their democratic yearnings deepened by their feminist ones, were ready to rebel. Blogger Lina Ben Mhenni was probably first to alert the world to Tunisian protests, in December 2010. (Despite threats and censorship, she persists.) And women flocked to rallies— wearing veils, jeans and miniskirts— young girls, grandmothers, female judges in their court robes. They ousted a despot and inspired a region.

But building a new society is a different challenge. Feminist Raja bin Salama, a vocal critic of fundamentalist subjugation of women, called for Tunisia’s new laws to be based on the Universal Declaration of Human Rights. She was denounced by Rashid al-Ghannouchi, exiled head of the Islamist party Ennahda, who vowed to hang her in Tunis’ Basij Square. He has now returned to Tunisia.

Still, Khadija Cherif, former head of the Tunisian Association of Democratic Women, guarantees women will continue to defend separation of mosque and state, saying, “The force of the Tunisian feminist movement is that we’ve never separated it from the fight for democracy and a secular society.”

The revolution Tunisia pioneered, Egypt made a trend, and one facilitated by women. Despite decades of dictatorship, a long-established feminist movement has survived there. Women had been key to the 1919 revolution against the British, but after independence were ignored by the ruling Wafd Party. The feminist movement erupted in 1923 when Huda Sha’rawi publicly stripped off her veil.

Remaining as active as possible in an autocracy, the movement embraces many NGOs and activists, reflected in the women at Tahrir Square who represented “all generations and social classes,” according to Amal Abdel Hady of the New Woman Foundation. At Tahrir Square’s checkpoints, men frisked men; women, women; and while there were several men’s lines to each one for women, that’s because in the past men—protesters as well as police— sexually harassed women so severely during protests that few women demonstrated. But Hady also noticed that the media paid much less attention to the women, fostering a perception that only men were in charge.

Yet, the action had been precipitated by a 26-year-old woman whom Egyptians now call “Leader of the Revolution.” On January 18, Asmaa Mahfouz uploaded a short video to YouTube and Facebook in which she announced, “Whoever says women shouldn’t go to protests because they will get beaten, let him have some honor and manhood and come with me on January 25.” The video went viral. The planned one-day demonstration became a popular revolution.

Soon, unsung protest coordinator Amal Sharaf—a 36-year-old English teacher, single mother and member of the organizers’ April 6 Youth Movement—was spending days and nights in the movement’s tiny office, smoking furiously and overseeing a crew of men. Google employee Wael Ghonim, who privately administered one of the Facebook pages that were the movement’s virtual headquarters, would later become an icon—but after he was arrested, young Nadine Wahab, an Egyptian American expert on new-media advocacy, took over, strengthening the online presence.

While Women of Egypt, a Facebook group, assembled a photo gallery of women’s role in the protests, neighborhood women wielding clubs patrolled their streets for security once the police vanished. “We see women, Islamist or not Islamist, veiled or not veiled, coming together and leading what’s happening on the ground,” said Magda Adly of the El Nadim Center for the Rehabilitation of Victims of Violence to Inter Press Service. “We’ll never go back to square one.”

Nonetheless, Nawla Darwish of the New Woman Foundation fears that because women weren’t pushing their own rights during the demonstrations, they’ll be ignored. “We are living in a patriarchal society,” she told Al-Masry Al-Youm, an Egyptian newspaper. And even the January 25 revolution may not be enough to change that.

Such fears are being realized. Nehad Abou El Komsan, chair of the Egyptian Center for Women’s Rights, is indignant that women have been left out of the political dialogue since Mubarak was ousted. Deplorably, the committee to redraft the constitution excluded women, even female legal experts. The Egyptian Center for Women’s Rights issued a statement denouncing the exclusion, signed to date by 102 Egyptian women’s organizations. So far, no response.

Egypt’s leading feminist, Nawal El Saadawi, now 80, feels a new social compact emerged in Tahrir Square: “But how to sustain this? We learned from Algeria. Women became angry when we heard the constitutional committee had not a single woman. Then the men dismissed our statement, since it was only paper. So we began planning a march and we are reestablishing the Egyptian Women’s Union—which had been banned—as an umbrella organization. We must unite for political power or men will exclude us. Once we are in the streets in millions, it’s not paper.”

Meanwhile, women persevere with stunning courage across the region.

In Yemen, protests were sparked by the arrest of 32-year-old Tawakul Karman, head of Women Journalists Without Chains. Now released, she insists, “There is no solution [to extremism] other than spreading the culture of coexistence and dialogue, skills that women master and possess.” In Bahrain, when police fired teargas at Shia women in chadors chanting anti-government slogans, the women sat down, and only after the police fled the caustic fumes did they leave. In Algeria, feminists marched, chanting, “Away with the family code!” In Gaza, Palestinians rallied, demanding that Hamas and Fatah unite, while Asma al-Ghoul, a young journalist known for her defiant feminism, called for a secular Palestine. In Libya, the revolt is, at this writing, still convulsively violent, including little-noticed reports of mass rape by government-hired mercenaries. Even less known is that it all began at the Benghazi attorney general’s office with a sit-in by lawyers and judges—led by Salwa Bugaighis, a lawyer in her mid-40s.

As Ms. goes to press, protests still are igniting in Jordan, Morocco, Libya, Oman, Sudan, Iraq, Lebanon and Djibouti. International Women’s Day demonstrations were staged in Kuwait, Bahrain, Yemen and Egypt. Rallies are even being planned in Saudi Arabia. In Iran—which is Persian, not Arab— thousands took to the streets against the theocracy. A regional young feminist action alliance, Women United for the Future of the Middle East, has just formed.

These women, who must confront first tyrants and then comrades, refuse to be stopped.

One last example. Syria, tightly controlling of its populace, boasts of setting records for women’s advancement. Vice President Najah al-Attar is the first woman in the Arab world to hold such a position (however questionable her real power). Yet in February, Tal al-Molouhi, a 19-year-old high-school student, stood in court chained and blindfolded and was sentenced to five years imprisonment. She had blogged about longing for a role in building Syria’s future.

Tal is that future. Sixty percent of the population in these countries is under age 30—and more than half is female.

Excerpted from the Spring 2011 issue of Ms. To have this issue delivered straight to your door, join the Ms. community.

An award-winning poet, novelist, political theorist, feminist activist, journalist, editor, and best-selling author, Robin Morgan has published more than 20 books, including the now-classic anthologies Sisterhood Is Powerful (Random House, 1970) and Sisterhood Is Global (Doubleday, l984; updated edition, The Feminist Press, 1996); with the recent Sisterhood Is Forever: The Women's Anthology for A New Millennium (Washington Square Press, Simon & Schuster, 2003). A founder/leader of contemporary US feminism, she has also been a leader in the international women’s movement for 30 years.