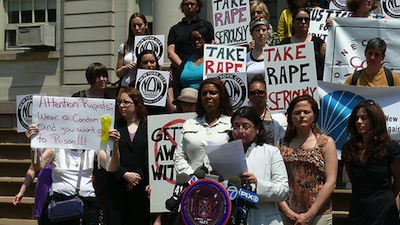 Melinda Hernandez, a member of the jury that last week acquitted two New York City police officers of rape, is distressed by a process that she felt left her no choice but to vote not guilty. Justice, she says, was not served.

“As a feminist it really challenged my values to vote not guilty,” an emotionally spent Hernandez told Women’s eNews in an exclusive telephone interview on May 30.

In particular, she was concerned about the way forensic evidence–in a case concerning police as perpetrators–went through the New York Police Department lab and was then sent to New York Medical Examiners lab.

“I think they should have hired an independent person to collect the evidence,” Hernandez says. “There’s just common sense behind that.”

While acquitted of the rape charge, the two officers–Kenneth Moreno, 43, and Franklin Mata, 29–were convicted last week of official misconduct and fired from the force the same day. They will be sentenced by the State Supreme Court on June 28 and will each face up to two years behind bars. Had they been found guilty of rape, the pair could have been in jail for up to 25 years.

In December 2008, the accuser celebrated a job promotion in a Brooklyn bar and became intoxicated. After drinks at the club, she took a taxi to her apartment building in downtown Manhattan and the taxi driver called the police to assist her up to her fifth-floor walk-up. Moreno and Mata responded. Videotapes from security cameras indicated the two police offers returned three more times to her apartment that night.

Hernandez says the woman testified that she was passed out and lying on her stomach and awoke to being penetrated by a penis. Then she passed out again. During the trial, she says it was revealed that Moreno was in the room with her and Mata was said to have been sleeping on her couch.

During a controlled meeting initiated by the internal affairs department of the New York Police Department, Moreno was confronted by the victim, who was wearing a recording device, outside the 9th precinct. She told him she awoke to him having sex with her. He denied anything had happened.

It wasn’t until the woman threatened to go into the precinct and make a scene that Moreno admitted to wearing a condom. He also assured the woman that she “didn’t have to worry about getting any diseases.” She asked if it was the two police officers and Moreno told her it was just him. Moreno later claimed that he said that to get her to leave him alone.

The verdict set off a storm of controversy in New York City, with a large demonstration led by members of the City Council’s Women’s Caucus, the New York chapter of the National Organization for Women, Feministing and Permanent Wave.

Here are Hernandez’s reflections on the case. Three central features of the case led her to cast her “not guilty” vote: the lack of any evidence gathered from the accuser’s apartment; the nature of alcohol-induced blackouts as described by an expert witness and an absent key witness.

Women’s eNews: What was the composition of the jury; how many men and how many women?

Hernandez: Five women and seven men, a good balance. At the beginning, it was nine to three: nine for not guilty, three for guilty. I was among the three who thought the police were guilty.

But you wound up voting “not guilty.”

All the evidence was collected by the NYPD internal affairs investigator and was taken to police crime lab. After it was examined there, then it was sent to the medical examiners lab.

Was there ever any question of police tampering of the evidence?

You can’t raise that kind of speculation. That’s why I think the system failed her big-time.

Wasn’t it strange that there was no evidence of the police in her apartment at all since there was no doubt that they had been there?

I thought the evidence, in this case, should have gone straight to the medical examiner.

Did the jury tend to believe the police officers?

It’s not that they believed the police officers. It is that it was hard to believe her. She used words like “I believe,” “I think something bad happened,” “I may have been raped.” This was during Grand Jury testimony in 2008. That really hurt her case, because there were holes in her story, again because of blacking out and/or passing out. She felt she had been penetrated. The first thing she did when she got up that morning was take a shower. She then went to her friend’s apartment, in the same building, wearing a towel around her head and said she wanted to scrub off her skin.

So she washed away the evidence? How could you hope to convict if she showered before going to a hospital?

During jury selection, right from the start, we were asked if we thought that if there was no DNA evidence that a rape still could have occurred. Every one of us said yes to that.

The victim remained confident that she had been raped?

There was no doubt in her mind about what had happened. A woman knows when she is penetrated. But without any evidence, it couldn’t be proven beyond a reasonable doubt. And if there is a reasonable doubt you must acquit.

I’ve shed many tears in this case. I’m a seasoned juror. I’ve served on nine juries including this one.

Was this your hardest experience?

Let’s put it this way: I hope I’ll never be called for jury duty again.

What did you think when you heard about the women’s rights protest in New York against the verdict?

I’m on the mailing list for NOW, (the National Organization for Women) and I got the e-mail regarding the protest. I was a juror and I am a feminist. This was devastating to me. But I had to do my job and be fair and impartial. A person is innocent until proven guilty. The burden remains on the victim. Perhaps if there were women demonstrating outside the courthouse every day it may have helped the jurors be more aware of their verdicts.

What do you think protests outside the courthouse during the trial would have done?

It would have sent a message that women cared about what was going on inside the court, that women believed the victim! The one positive thing that might come out of this is it could set a fire under women to get out there. Women are still not equal under the U.S. Constitution.

This article was first published by Women’s eNews. Read the full article at womensenews.org.