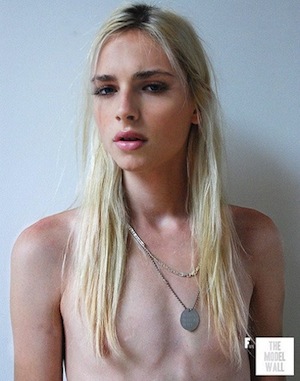 Say this about lad mags: Their writing may be clunky and their attitude towards women troubling, but they do offer a fascinating window into a peculiar type of male anxiety. Take FHM‘s 2011 edition of their Sexiest Women in the World list. Over one million readers of the UK’s equivalent to Maxim voted to rank various models, singers and actresses. #98 on the list–just ahead of Lady Gaga–was originally fashion model Andrej Pejic, who is actually a male model with androgynous features. His entry has since been removed and replaced with an apology, but one Pejic fan managed to snap a screenshot of the accompanying copy before it went away.

The copy isn’t pretty. After calling him a “thing,” FHM’s anonymous writer notes Pejic’s desire to model for Victoria’s Secret with a churlish plea for someone to “pass the sick bucket.” Androgynous male models, he (I’m assuming it’s a he) writes, are “one fashion trend we won’t be following.”

Did the editors really forget to make sure the copy passed their exceedingly high editorial standards? Did they intend to make Pejic an object of scorn, or was that just some freelancer taking the initiative? We’ll probably never know, but that’s not really the interesting part. What fascinates me is just how much the writer’s scorn reveals.

What it tells us is that FHM and its ilk is about more than famous women in awkward poses and states of undress: It exists not just to titillate but to reaffirm the masculinity of those reading it. I submit that’s why the original Pejic entry, no matter what FHM says, is in keeping with the mission of the magazine. FHM readers are invited to sneer at him because he doesn’t conform to their notions of maleness. And identifying and isolating the “other” like that reinforces their own place in the boys’ club.

Which puts FHM writers in the difficult position of having to simultaneously acknowledge why their readers found him beautiful (which he is, in a delicate, almost angelic way) while also making ostentatious displays of their disgust. It’s a neat trick. But for me, anyway, it inspires more pity than anger. If you’re looking for affirmation of your identity in a lad mag’s heteronormative slurs, then dude, you need help.