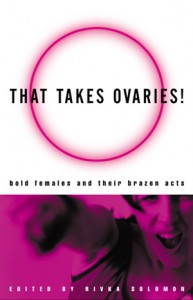 Rivka Solomon, the daughter of 1960s activists, has long been a rabble rouser. Her 2002 edited anthology, That Takes Ovaries!, now in its sixth printing, still inspires action with its essays by women telling their true stories of “being bold and brazen, outrageous or courageous”–from rallying against sexual harassment to chewing out a burglar in the act. That book (and play of the same name) has spurred its own international movement, serving as a blueprint for at least 600 open-mike speak-outs and performances in which girls and women celebrate their own “ovarian acts.”

But the amazing part is that she has done much of this from bed.

In 1990, while she was a graduate student studying international relations, she got sick, as she describes it,

with an unknown illness from hell that took away all my physical energy and my brainpower. … The brain fog that accompanied–and still accompanies–the illness was scary. When I was halfway through a sentence, I’d forget what I was talking about. I forgot my own phone number. The exhaustion is so extreme, it is difficult to engage in routine tasks, like taking a simple shower. I crawled into bed and stayed in or near it for much of the next 20 years, and I’m still there now, to this day.

ME/CFS now has no treatment or cure, and typically creates extremely disability for the estimated one million sufferers in this country and 17 million worldwide. Adding to that suffering is the public stigma that it is all in their heads. As a result, the U.S. government has been resistant to fund research into the disease, with only an estimated $6 million allotted to it yearly.

So, following her own example of grassroots organizing, Solomon has been spearheading historic  protests in the U.S. to raise awareness of the problem. She began last year with a one-woman protest in front of the Department of Health and Human Services (HHS) and Red Cross headquarters in Washington, D.C.  She didn’t leave her bed to make her next protest video, a comedic one “where me and my family are demanding–via singing–‘clinical trials now!’ for ME/CFS.'”

Most notably, in the past several weeks she organized two protests of patients, marking the first time they have taken to the street together in the U.S. The first was before the HHS buildings in D.C. and the second, larger one, was in San Francisco. She blogged about the San Francisco action, which was also covered by the San Francisco Chronicle.

Solomon and others are following the lead of activists from the organization ACT UP, whose public protests have spurred federal funding for HIV and AIDS since the 1980s. They also commonly point out possible similarities, both being linked to a retrovirus. Says Solomon,

There was a significant paper published in 2009 in the journal Science, and it found that a newly discovered retrovirus is found in high numbers in people with ME/CFS. Many of us feel like we have ‘AIDS-lite’; we are very very sick, but we don’t die as quickly from the disease.

Like her fellow protesters, Solomon has paid dearly for her activism, taking weeks to recover from each action. She was in bed for three days after last week’s San Francisco protest. But she hopes that her recent protests, like her book, serve as role models for others to stage such actions. She actively encourages other patients to stage protests at one of the 20 HHS and CDC satellite and regional offices across the U.S., even offering the concrete support of borrowing her homemade banner. As she says,

This issue is not going away. … Heck, if we have to drag our beds to an HHS building to make a statement, it is my hope that we will do just that.

For information about organizing your own protest for ME/CFS research, email Rivka Solomon at rivka@thattakesovaries.org.

Other Countries Have Safety Nets. The U.S. Has Mothers
“Madan Sara” Tells the Story of Haitian Women Both Ordinary and Extraordinary
Would You Like Your History With or Without Women?