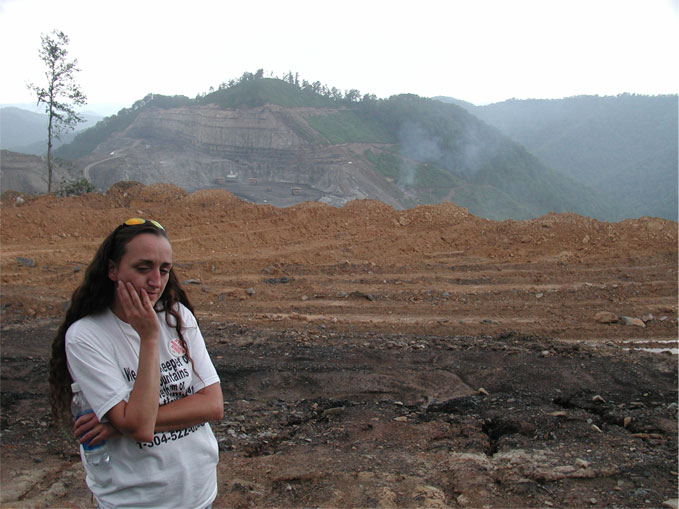 A women’s movement is brewing in America’s heartland, and it’s not about the glass ceiling, equal pay or sexual harassment. It’s about the survival of local communities, the health of their citizens, and ultimately, the planet.

The battle is taking place in Appalachia, where much of our coal is mined, shipped and burned, and where the collateral damage is the most severe. Coal provides almost half of America’s electricity, one-third of our mercury emissions, and half of our greenhouse gases. We’ve been mining and burning it for centuries, but our voracious appetite for this artificially cheap source of electricity has tripled in the last decade and coal’s toxic residue has crossed a dangerous tipping point.

This movement’s Selma and Montgomery are the coalfields of West Virginia and Eastern Kentucky. Five hundred mountains there have already been destroyed by mountaintop removal mining, whereby peaks are pulverized by explosives and the debris is shoved into valleys clogging thousands of miles of streams, leaving behind poisoned water and barren moonscapes. More than two hundred people were arrested in 2010 and 2011 in civil disobedience protests as they fight to save the last great mountain in the region, Coal River Mountain.

At the heart of this protest is a gutsy group of women grassroots environmental activists who have put their lives on the line in the name of environmental justice. Many of them are featured in the documentary I produced, The Last Mountain, which premiered at the Sundance Film Festival in January and will be in theaters in 25 cities in June and July. These women all have two things in common: courage and a gut sense of right and wrong. They are fierce voices fighting corrupt and powerful corporations and government officials. They are mothers, homemakers and local workers who came to activism because of what happened to their own backyards, their children and their neighbors.

Take Maria Gunnoe, who lives in the mouth of a narrow hollow in Boone County, West Virginia. Her densely wooded 20-acre property was first settled in the 1840s, when her Cherokee ancestors found refuge there during the Trail of Tears, Andrew Jackson’s forced evacuation of Native Americans from the Deep South. In 2000, the 1,200-acre Jupiter mine started removing a nearby mountain ridge and dumping its debris into the valley above Gunnoe’s home. Soon after, severe flooding began on her property, the stream next to her house intermittently becoming a raging river. In 2004, her home was almost destroyed by a massive and dangerous flash flood and her property buried in thick, toxic coal sludge. Gunnoe knew then that her family’s safety and heritage depended on stopping the mine. A waiter and mother of two, Gunnoe sued the mine company, and the day after she won her lawsuit in 2007, “Wanted” posters with pictures of her face were posted on telephone booths and store fronts all over Boone County. Her phone rang off the hook with menacing crank calls and death threats.

The daughter, granddaughter and sister of coal miners, Maria Gunnoe now works for the Ohio Valley Environmental Coalition (OVEC) and has become one of Appalachia’s most potent spokespeople and persuasive community activists. In 2009 she was awarded the Goldman Environmental Prize, the Nobel Prize of grassroots environmental activism. Maria believes that the flattening of 500 mountains in Appalachia is destroying not just the mountains, but also Appalachia’s rich heritage. “The coal company’s ultimate goal is to depopulate these valleys and turn them into wastelands,” she told me. “And, quite honestly, they’ve got a good start. I can recall, right off the top of my head, 25 communities that have been depopulated.”

Jennifer Hall-Massey lives in Prenter, West Virginia and commutes the 17 miles to her job in Charleston, West Virginia. Her small town has lost six neighbors to brain tumors, including Hall-Massey’s 29-year-old brother. Prenter’s residents report that their well water has come out of the tap looking gray and tests show the water contained toxic amounts of lead, manganese, barium and other metals that can contribute to organ failure or developmental problems. Since 2004, 1.9 billion gallons of toxic coal waste been released into the ground by coal companies within an eight-mile radius of Prenter—sludge which contains many of these same toxins. Hall-Massey has organized 264 neighbors to sue nine nearby coal companies, accusing them of putting dangerous waste into local water supplies and she fought successfully to bring in municipal water to replace their tainted well-water for many of the residents.

Lorelei Scarbro, the granddaughter, daughter and widow of West Virginia coal miners, lives in the shadow of Coal River Mountain, where Massey Energy owns four permits to mine over 10 square miles of the mountain. Scarbro and her fellow community organizers at OVEC and Coal River Mountain Watch have proposed an alternative to mining: a 440-megawatt wind farm on the high ridges of the mountain that would generate more long-term jobs and revenue than mountaintop removal and provide electricity to 70,000 homes.

The grandmother of this movement is a woman named Judy Bonds, who died of cancer at the age of 58 in January. Bonds, a former Pizza Hut manager and a coalminer’s daughter, founded Coal River Mountain Watch and dedicated 90 hours a week of her life to stop what she called, “strip mining on steroids.” Bonds threw herself into the battle when she witnessed her grandson pull handfuls of dead fish out of a stream her family had fished in for six generations. “What’s wrong with these fish?” he asked. “That day I knew that if I didn’t do something,” said Bonds, “that would be the future of our children.”

You can raise your voice against mountaintop removal mining by signing here:

The Last Mountain opened in theaters in New York and Washington, D.C. this week and will be in 25 cities in June and July.

Photo of Maria Gunnoe by Vivian Stockman. All rights reserved.

An award winning journalist and author, Clara Bingham is a former Newsweek White House correspondent and the author (with Laura Leedy Gansler) of Class Action: The Landmark Case that Changed Sexual Harassment Law (Doubleday 2002). Bingham’s book was adapted into the 2005 film North Country (Warner Bros.), staring Charlize Theron and Frances McDormand. Both actresses received Oscar® nominations for their roles. Class Action was a Los Angeles Times Best Book of the Year and won the AAUW Speaking Out For Justice Award.