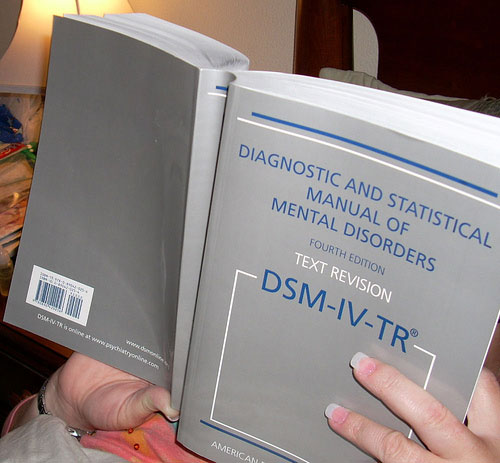 Update: First published in Psychology Today  on Monday, this column opposes adding PAS, a dubious diagnosis used by abusive fathers to win custody cases, to the American Psychiatric Association’s official manual. It urged readers to go to the APA site to comment. On June 9, the author received a letter from the APA Task Force saying they were not recommending the syndrome for inclusion. We’ll take that as a feminist victory!

Among the scientifically unwarranted and socially dangerous proposals that the Diagnostic and Statistical Manual-5 (DSM) authors have not yet seen fit to rule out is the addition of something its advocates call Parental Alienation Syndrome (PAS). This is a medical-sounding term for nothing more than “she’s a vengeful woman who’s trying to make her children tell horrific lies about their father.”

It is nearly always applied to mothers whose children are being molested by their fathers. Despite not yet being in the DSM, PAS has in some courts proven an astonishingly effective vehicle for deflecting the focus from the abuser and simply claiming that the woman must be lying, and coaching her children to lie, because she has the alleged mental illness of PAS. The claim is that, without cause, she wants to turn the children against their father.

What often gets short shrift, as a result, is even the consideration of the possibility that the children are truly being molested. Virtually everything that is sometimes a sign that a child is being molested–such as fearfulness when it is time for a visit with the abuser or vaginal bleeding or infection in a 2-year-old–is instead interpreted as further “proof” that the mother has PAS. The child’s fearfulness is cast as the result of the mother’s efforts to make the child frightened of the father … and the vaginal problems are assumed to be caused by the mother in order to provide fake evidence of the molesting. If this sounds far-fetched, it is not. I have both done research and consulted in court cases about this.

As Dr. Julie Ancis, who has conducted extensive research about such cases, has noted:

[Richard] Gardner [who invented PAS] claimed that many reports of [child sexual abuse] in the context of divorce cases were false allegations. In this connection, it is important to note that Bala and Schuman (1999) found that only 1.3 percent of mothers’ allegations of abuse by their children’s fathers were deemed by civil court judges to be intentionally false, in contrast to 21 percent of cases in which fathers had made such allegations against mothers. And Meier (2009) reports after reviewing the research that it is a mistaken belief that mothers’ allegations in child custody proceedings that fathers have sexually abused their children are usually false.

Gardner not only thought up this label but also condoned adults’ sexual assaults on children and said that reports of child sexual abuse were elevated because sexually voyeuristic social workers made them. Despite the fact that some judges have quite rightly forbidden the use of the term in their courts, it remains widely used in other courts and sounds more impressive coming from the lips of a testifying mental health professional than, “She’s just a lying, angry woman.”

Gardner’s (1998) questionable ethics and clinical judgment are reflected in (but are by no means limited to) the following: (1) he recommends joint interviews with an accused father and child in which the father directly confronts the child about the allegation, and (2) he interprets a child’s overt expression of fear of possible retaliation by the father as evidence of the child’s embarrassment about lying rather than as possibly a valid fear of a truthtelling child whose father is abusive.

Major professional bodies, including the American Psychological Association, have discredited PAS on the grounds that it is misused in domestic violence cases and that there is no scientific evidence of such a “syndrome.” A number of prominent figures, including Dr. Paul J. Fink, past president of the American Psychiatric Association and president of the Leadership Council on Mental Health, Justice, and the Media, and Professor Jon R. Conte of the University of Washington Social Welfare Doctoral Faculty have also discredited PAS [PDF] and its lack of scientific basis.

Because of the use of PAS as a tactic by many childhood sexual abuse perpetrators to influence decision makers and the court system, abused children have been placed in the hands of their abusers. It is estimated that “more than 58,000 children a year are ordered into unsupervised contact with physically or sexually abusive parents following divorce in the United States” and that PAS was used in a large number of these cases.

The DSM-5 editors could at any time have already struck PAS from their planned additions but have so far chosen not to.

If this alarms you, and especially if PAS has been used against you, please consider going to the APA’s website before their June 15 cutoff date for input from the public arrives, and send them your concerns. Please urge everyone else you can think of to do the same. The DSM-5 authors will do themselves and the manual’s reputation no favors if they include PAS, and they need to hear from people whom the label has harmed.

Reprinted with permission from Psychology Today.

Paula J. Caplan, Ph.D., is a clinical and research psychologist, activist, and advocate, most of whose 11 books are about women’s issues from a feminist perspective. She is Associate at the Du Bois Institute, Hutchins Center for African and African American Research, Harvard University and a past Fellow at Harvard Kennedy School’s Women and Public Policy Program. As a nonfiction author, playwright, and filmmaker, she has won many awards.