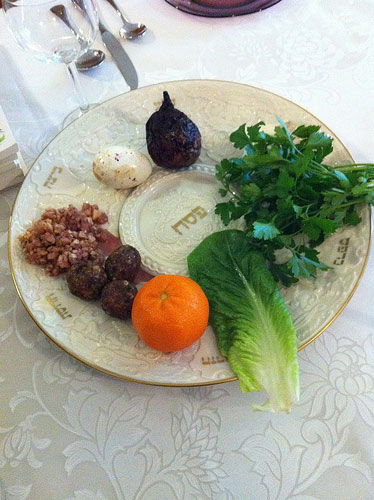 At first I was confused when the rabbi at my university’s Hillel placed an orange on our seder plate during the Passover celebration. Where was there an orange in the story of Passover? Later, I learned that my rabbi was honoring the feminist world of Judaism, following in the footsteps of Esther M. Broner (E.M. Broner), who co-wrote with Naomi Nimrod the famous Women’s Haggadah that was first published in Ms. in 1977. The orange is a symbol of the fruitfulness that is added to our lives when the presence of women and members of the LGBTQ community are honored. While Broner is not personally responsible for the introduction of the orange on the seder plate (the credit belongs to Susannah Heschel) her work–especially the Haggadah–set the example. Broner passed away at the age of 83 on June 21, but her Jewish feminist legacy lives on.

Broner was born in Detroit in 1927 and educated at Wayne State University, where she received her B.A. and M.A. She later served as a professor of English and writer-in-residence there, and completed her Ph.D at the Union Institute and University in Cincinnati in 1979. In true feminist spirit, Broner used the intersectionality of her feminism and Jewishness in order to make Judaism more inclusive for women. Her wonderful Haggadah would not have been published if not for Ms., as book publishers had turned it down. Here’s an excerpt from the introduction:

The seder is a family occasion prepared by the woman; the Haggadah service is conducted by the man. It has been thus for thousands of years … When Naomi Nimrod and I began our women’s Haggadah, we did not know how to question.

Every Passover of our lives we had waited for our fathers to open the door to knowledge. Now we decided to do the ‘telling’ ourselves. In April 1976, Naomi and I held simultaneous ceremonies; mine was in New York and hers was in Haifa…

The women that gathered in New York–Gloria Steinem, Phyllis Chesler, Grace Paley, Bella Abzug and other leading figures of the women’s movement–would continue to attend the seder for the next 30 years. The participants called themselves the “Seder Sisters,” and each ceremony had a new theme that prompted sharing of personal stories.

The Haggadah itself provides countless opportunities to let women come forward and share, most notably in the reworking of the famous Four Questions. In a traditional seder, the questions are asked in order to learn the significance of Passover. For Broner and Nimrod, these were the more important questions (and answers):

Why have our mothers on this night been bitter? Because they did the preparation but not the ritual. They did the serving but not the conducting. They read of their fathers but not of their mothers.

Why on this night do we dip twice? Because of the natural and unnatural cycles of blood.

Broner has gathered the stories of Jewish women from her seders in her 1993 book The Telling: The Story of a Group of Jewish Women Who Journey to Spirituality Through Community and Ceremony; she also wrote a memoir, Mornings and Mourning: A Kaddish Journal (1994), concerning her struggle to say Kaddish (a memorial blessing) for her father in an Orthodox synagogue, where women were relegated to pray in the back. (The book recounts one episode when she defiantly put a swim cap on her head when she was isolated from the men’s section of the synagogue by a shower curtain.) She wrote the well-known novel A Weave of Women (1978) and several other plays and nonfiction books.

Next Passover, remember her with an orange on your seder plate.