The Bachelorette: Who Really Chooses at This Sadie Hawkins Dance? - Ms. Magazine
Skip to content 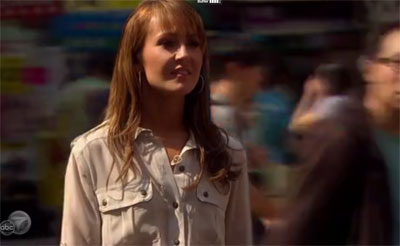 I used to think no TV show could possibly be more insulting to women than The Bachelor. Each season since its 2002 debut, one mind-numbingly dull guy after another (chiseled jaw, six-pack abs) weeds through 25 “eligible” women to find the perfect wife. Someone good at listening. Willing to pick up and move wherever he lives.

Along the way, there are the predictable reality TV “surprises”: Someone leaves, isn’t “nice” to the other “girls” in the house, comes on too strong. Or, in the show’s favorite phrase for subterfuge, “isn’t there for the right reasons.” The worst is watching the writers fuel the sense of female competition with rituals such as two-on-one dates, where the Bachelor invites two women out at the same time for strained conversation at some candlelit restaurant. In case we don’t get it, the directors lay a single rose on the table between them. Sometimes we even get a close up.

Thank you, ABC. We get it. Women live for the chance to be asked out. Put their lives on hold for love. Look at each other and see … someone trying to steal their man! Every possible anti-feminist stereotype gets played out here against a backdrop of waterfalls and tiki huts.

What could possibly be worse?

Try this: ABC’s spin-off series, which debuted in 2003, in which female runners-up from previous seasons get the chance to do their own eliminating, hand out their own roses, and (supposedly) exercise their own power to choose. The Bachelorette is like one long Sadie Hawkins dance, its campy reversals revealing just how much power the “real” conventions hold. Even more than The Bachelor, The Bachelorette exposes the painful confusion surrounding male/female relationships in 2011. It may be possible for women today to name their desires, to choose, without humiliation. But not on The Bachelorette.

Take Ali Fedotowsky, who left an earlier season of The Bachelor because—oddly—she wanted to go back to her job. Would a woman actually go back to a job she liked (and needed) instead of hanging on for more two-on-one dates and “the chance at love”? Yes, in this case. But that sort of independence didn’t last for long: Ali reappeared in Season 6 as a Bachelorette, the suggestion seeming to be that now she was “in a good place,” “here for the right reasons” and ready to set “career” aside for the real work of husband-choosing. Thanks, ABC.

Still, nothing could have prepared me for Season 7’s ups and downs. On the last Bachelor, Ashley Hebert just missed her “chance” with chiseled-jaw Brad Womack (who has since broken up with the woman he did select). Now, Ashley—impossibly petite and perky—is back from dental school to find true love. She’s presented the customary assortment of handsome guys: a fourth-generation butcher, a wine-maker, a NYC investment guy, a brooding restaurant manager. And, of course, a guy with “questionable motives.” So who does Ashley “fall for”?

Of course! Bentley, man of questionable motives (and limited vocabulary) who seems planted in the early episodes to remind Ashley—and the rest of us—that whatever the script says, in the world of reality TV men still do the choosing.

The entourage drifts from Vegas to Phuket (“Cute!” Ashley exclaims about the Thai beach town) and on to Hong Kong. In each location, Ashley sobs over Bentley, who left the show, offering her only a “dot dot dot” of possible reconnection. This week, that “dot dot dot” ended when Bentley flew across the world to break up with Ashley in a Hong Kong hotel room.

Then, things got worse. Briefly, Ashley announced she was “ready” (another favorite ABC-ism) to move on and be honest with the remaining men about Bentley and her past ambivalence.

My daughters (17 and 19) and I had been watching this on fast-forward, but here we all had to slow down and focus. Mayhem ensued once Ashley told “the guys” the truth—she was done with Bentley and ready to move on. No more “dot dot dot.” On to a fresh start.

And the result? Guys looked angry and unhappy. One announced he was leaving the show immediately, and hauled himself off in a dinghy that seemed to appear out of nowhere. Others also threatened to go. “Don’t give me a rose tonight,” one guy said tersely, jaw set. Briefly, Ashley looked almost real in her confusion. Like she was playing a game in which she had no control. Like she was broken and humiliated instead of getting to wield power.

It seems like being the Bachelorette is an impossible role. Instead of showing women with “power to choose,” this show portrays female agency as a contradiction in terms. Patriarchy gets in its way. And it returns, season after season. Roses and all.

Amy Boesky is Associate Professor of English at Boston College, where she teaches creative nonfiction and early modern literature and culture (including courses on early women writers). She’s written both for children and for adults, and most recently is the author of What We Have (Penguin/Gotham 2010), a memoir about her family’s experience with hereditary breast and ovarian cancers. Visit her website at amyboesky.com.