Warning: Models in This Image May Not Be as Thin as They Appear - Ms. Magazine
Skip to content 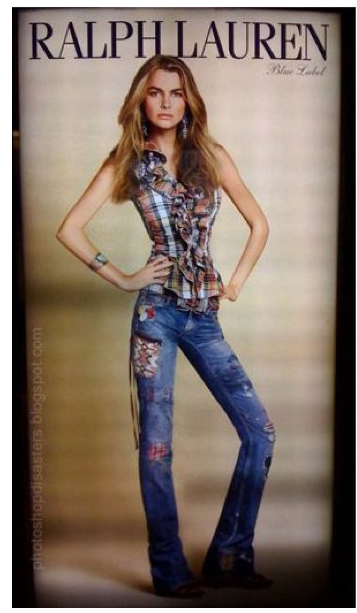 This week, the American Medical Association denounced the use of digital manipulation and retouching on models and asked advertising agencies to consider imposing stricter guidelines for manipulating photos before they are sent to press. I, for one, say it’s about time.

But should the U.S. go a step further? In England and France, lawmakers have been trying to get ad agencies and magazines to put warning labels on retouched images to alert the public that these images are fake. Such labels would help young people seeing these images to realize that they set an unattainable beauty standard. The United States may well be ready for such a change, especially in light of the relief and excitement many people seemed to feel after seeing models bare it all with no retouching a few years ago.

Though I was never diagnosed with an eating disorder, I struggled with my body image all throughout high school and college (and probably even earlier than that). I went to the gym twice a day and enrolled myself in exercise courses at school, giving me three workouts a day on average. I ate two very simple meals a day, skipping lunch. I became a vegetarian to more easily avoid fast food and keep off that dreaded Freshman Fifteen. It wasn’t until I came home from undergrad one summer and my friends and family said, “Wow, Ashley. You look sick,” that I realized what I was doing to my body. Luckily for me, that simple statement was enough to shock me into rethinking my eating habits. But for many people, statements like that aren’t enough. Just check out these statistics on eating disorders in America from the South Carolina Department of Mental Health if you don’t believe me. Eating disorders are incredibly prevalent in America, and are on the rise in other countries. Photoshopped images such as the one above are cited for the rise in eating disorders and unhealthy attitudes about body weight and size.

Would it help if we followed France and England’s proposal and added a label such as this one to the bottom of a picture?

Warning: Models in this image may not be as thin as they appear.

America might be ready for such warning labels. After all, we’ve been putting warning labels on cigarettes since the 1960′s, and even now we’re engaged in a discussion on including gruesome images in cigarette labels to increase the rate of smokers quitting. In America, warning labels are everywhere; even McDonald’s coffee now comes with a warning label that the beverage may be incredibly hot.

But do these labels work, or are we so inundated with warnings that we tend to just ignore them? There has been some serious discussion about whether or not cigarette labels are effective (hence the new ones with images), and I can’t tell you how many times I have lifted that cup of McDonald’s coffee to my lips without waiting for it to cool down, only to end up with a burnt tongue. Seeing a warning label is one thing; critically thinking about how the product can harm you before proceeding is another.

Similarly, people often see warning labels and dismiss them: “I know cigarettes can harm me, but oh well.” What would stop them from saying, “I know this model doesn’t look like this in real life, but oh well”? Every year, I teach a unit on advertising and body image to my high school sophomores and, while they eventually get involved in the unit and subsequent discussions about unattainable beauty standards, they always begin with the same response: “We know this already!”  My question to them, then, is this: “Is knowing the same as understanding?” If you know these images are fake, do you understand? I grew up my whole life knowing that images were altered to make the models appear more “attractive,” but that didn’t stop me from wanting to look like them anyway. And, with eating disorder statistics on the rise as much as they are, I wonder if just knowing it’s fake is enough.

Then there is a the problem of reverse retouching. If we are going to warn people about images that have been retouched to make models appear thinner, what about the very real problem of images that have been retouched to make the models appear larger and healthier? Many magazine editors have admitted to what is called “reverse retouching,” or taking a very thin model and making her look healthy. This can happen when magazines hire women who look great in portfolios, but then show up looking like they haven’t eaten in months. They still use these models, but use digital manipulation to make them look healthier. Would these images require labels, as well? What would that look like?

In an ideal world, magazines, ad agencies, etc., would not even use digital manipulation to make models appear thinner (eliminating the need for any kind of warning system), nor would they use models who were too thin and use digital manipulation to make them look healthier (eliminating the need for models to starve themselves to get work). They would use just use real pictures of actually healthy people.

Since that probably won’t happen any time soon, I applaud the AMA’s proposed limitations on photoshopping. And I’d propose this in lieu of warning labels: In an almost-ideal world, young people would be taught to think critically about the digitally altered advertisements they see and the how those advertisements affect them. If you would like to reach out to the young people in your life, I recommend starting with these two YouTube videos. Both show how the retouching is done, bringing home how fake it actually is.

Just don’t forget to follow up these videos with discussions about the images we are inundated with every day. This isn’t a perfect solution, but it’s a start.

This post was originally published at Gender Across Borders.

Ashley Lauren Samsa is a 27-year-old high school English teacher in the suburbs of Chicago, IL. Aside from teaching full time, she currently writes for her own site, Small Strokes, about the intersection of feminism with her personal and professional life, and is a Senior Editor for Gender Across Borders, where she writes about many global feminist issues.

Our Abortion Stories: Shamed Into Silence, ‘We Weren’t Fit To Become Mothers’
40 Percent of Single Moms Face Food Insecurity. The Fall of Roe Will Plunge Them Deeper Into Poverty
Her Ex-Husband Is Suing a Clinic Over the Abortion She Had Four Years Ago