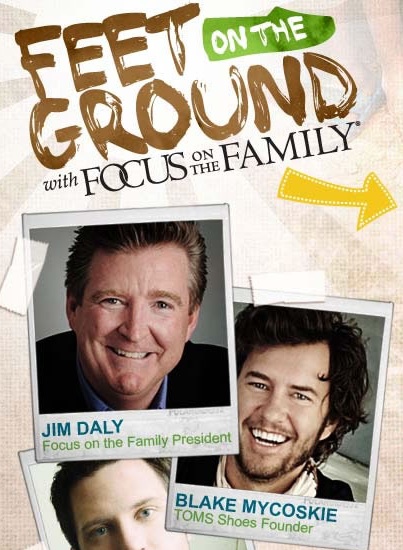 UPDATE: In response to public outcry, TOMS founder Blake Mycoskie has posted this mea culpa to his blog, apologizing for his appearance at a Focus on the Family event and insisting that the company is not a “TOMS giving partner.”

For socially conscious consumers, TOMS Shoes has always seemed like a no-brainer: The company gives a pair of shoes to a child in need for every pair purchased, touts its commitments to fair wages and good labor conditions, and even has a line of vegan footwear. True, it’s a for-profit, but TOMS frames that as a means for growth and greater impact. And an extra bonus for many feminists who’d rather not induce Morton’s neuroma by cramming their feet into stilettos all day long is that TOMS carries comfortable flats that don’t make you look like a second-grader.

So it induced a collective “huh?” among progressives and feminists when news broke yesterday that TOMS founder Blake Mycoskie has partnered with the anti-choice, anti-gay, evangelical Christian group Focus on the Family. Mycoskie recently appeared at a FOTF event where he discussed “faith in action” with Focus on the Family president Jim Daly. Now, Focus On The Family is in the process of becoming a TOMS international distributor in Africa.

Focus on the Family was founded by evangelical Christian “psychologist” James Dobson in 1977. Since then the organization has been a major player in the Christian conservative crusade against gay rights and women’s right to abortion. You may remember Dobson as the guy who said that gay marriage “will destroy the earth,” or who drew a connection between legal abortion and 9/11, saying, “The wages of sin is death.”

Dobson left the organization in 2009, but the group’s philosophy remains the same–anti-gay, anti-choice, in favor of abstinence-only education and traditional gender roles. Essentially, everything feminists oppose. So many are dismayed to learn that the same company handing out shoes to kids in need is also in bed with one of the most odious organizations around.

Thus far, Mycoskie seems to be unfazed by the backlash–Jezebel reported that he’s ignored all comments on his blog expressing disapproval of the partnership. Maybe he’ll take notice once his best customers take their shoe business elsewhere.