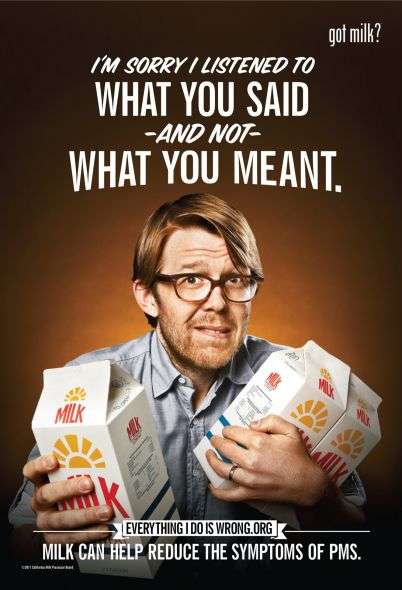 UPDATE: The milk ad website, formerly everythingidoiswrong.org, has been pulled down and traffic redirected to gotdiscussion.org. Read more here.

The California Milk Processor Board’s latest campaign is meant to raise awareness of milk’s health benefits in reducing the symptoms of PMS. The campaign is not targeted at women, though, but at dudes.

Called “Everything I Do is Wrong,” the Milk Board is promoting tired old stereotypes about pre-menstrual women being irrationally angry and scary nutcases. With miracle-cure milk and some pre-packaged apologies such as “I’m sorry, I listened to what you said and not what you meant,” the Board will thus equip dudes with the proper ammunition to deal with their “crazy bitch” lady friends who are on the rag. As Kelsey Wallace said at Bitch, “Finally! An ad campaign that stereotypes women AND promises to make straight men’s lives easier!”

Excuse me while I turn red with non-PMS-related rage.

Jeff Goodby, of Goodby, Silverstein & Partners, the creative agency behind the campaign, is sitting in that sweet spot where he gets to capitalize on anti-feminist humor about women being too sensitive and/or irrationally angry, and then write off any criticism as women being too sensitive and/or irrationally angry. Despite Goodby’s insistence that women with a sense of humor (i.e. not fuddy-duddy old feminists) will find this hilarious, such stereotypes are in fact anti-women. They’re the same stereotypes cited by those trying to keep women out of good jobs, and those who say we shouldn’t have a woman president because she’d start a war just because it was her time of the month. Additionally, jokes about women’s irrational anger or emotional instability reinforce the idea that men shouldn’t have to work hard in a relationship, a marriage, or at anything, really, because if a woman gets upset it’s because of her hormones and not for any rational, legitimate reason.

This isn’t the first time that the Milk Board has used sexist cliches to promote milk as a PMS-reducer or beauty booster. One commercial from 2005 shows men buying every carton of milk they can find in order to placate their pre-menstrual wives. There was also this gem, which infantilized women with sexist fairy tales (check out Sarah Haskins hilarious commentary on Current TV’s Target Women for more).

It shouldn’t surprise anyone that a commercial marketing campaign would play on negative stereotypes about women–just look at ads for beer or cleaning supplies. But because this campaign focuses on a health benefit, it is consciously designed to feel a bit like a public service announcement. This is problematic because the science behind that claim is iffy. Connie Bohon, an ob-gyn in Washington, D.C., calls the link between milk and PMS “soft,” telling the Washington Post, “There are some beliefs that calcium can improve PMS symptoms [but] I don’t know that it’s universally accepted.” The belief is based on a 1998 study in the American Journal of Obstetrics and Gynecology–a study sponsored by SmithKline Beecham Consumer Healthcare, makers of calcium-supplying TUMS–which found that women who took 1,500 milligrams of calcium via supplements experienced nearly a 50-percent reduction in PMS symptoms. Still, there’s no clear evidence that this would work the same with calcium-rich foods like milk.

Unfortunately, this type of stereotyping to market women’s health–and corporate products–isn’t unusual. A recent New York campaign to encourage breastfeeding played on women’s body image insecurities by framing weight loss as the primary reason to breastfeed. And breast cancer campaigns have adopted slogans such as “save the ta-tas,” implying the only reason to save a woman’s life is so she can keep being a sex object.

So how did the Milk Board come up with this idea–didn’t they think it would offend women? Goodby claims the concept tested well in his “small focus group,” but he doesn’t specify whether it was a group of men or women. He told The New York Times,“We’re trying to do something that’s tasteful.”

I’m not sure I share the same definition of “taste,” since I’m finding this campaign hard to stomach. I may be lactose intolerant, but that’s not why my insides are curdling.

Keep reading our weekly No Comment series every Wednesday on the Ms. Blog, and be sure and send in the sexist ads that piss you off.