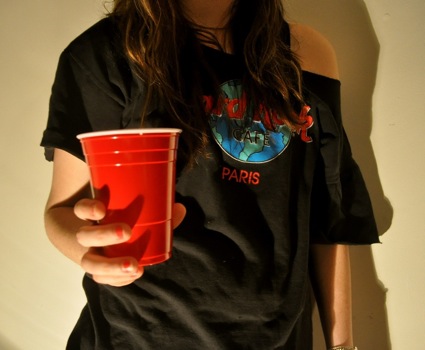 It’s like the age-old question about a tree falling in the forest: If you report a sexual assault on your college campus, does anyone hear it? A study released last month by the Chicago Tribune found that only one arrest was made for every 14 reported sexual assaults on six Midwestern campuses that were surveyed. The national statistic on arrests per reported assault was already alarming–1 in 4–but this is more than three times higher. It’s a glaring reminder of the rape culture that college women like myself are subject to, and of broken university policies that harm the very students they should be protecting.

This past spring, a freshman at my school was assaulted in the early morning hours while standing outside her dorm. The incident sent shockwaves around the campus, causing many women to question their own safety. In response to the gossip, rumors and panic, a remedy was proposed by our student government and residential life organization: Install surveillance cameras outside of the dorms.

Yeah, I feel safer already. This is a perfect example of the well-intentioned but flawed logic of many campuses’ rape-prevention policies. While every effort by universities to prevent sexual assault is appreciated, even MU Campus Police Captain Brian Weimer said,“We haven’t had a stranger incident in many years; I can only remember one in my time here. It’s not something that happens very often at all.”

Stranger rape is not common on any campus: 84 percent of women who are raped knew their attacker. It seems, then, that in addition to cameras the university should spend more time eradicating the systematic failures that cause one in five women to be sexually assaulted while at college. The Greek institutions on campus–which constitute 22 percent of the undergraduate population at my school (more than 5,000 students)–need particular attention. Multiple studies have shown that men in fraternities are more likely to commit sexually violent acts than men who are not. In the past, programmatic attempts to reduce sexual violence in colleges have focused primarily on educating women on how to keep from being assaulted: Don’t drink too much, don’t dress suggestively, don’t go out by yourself. But in a NASPA Journal study, Behavior Differences Seven Months Later: Effects of a Rape Prevention Program, John D. Foubert says, “Although these recommendations have value, they showed few, if any, signs of addressing the root of the problem—the behavior of men who chose to rape.”

It’s no secret that there are some misogynistic, dangerous frats out there, but it only takes the actions of a few fraternity members to create an unsafe environment for women. Foubert suggests that rape-prevention programs focus on treating men as potential allies to women, teaching them to help a survivor overcome the traumatic experience of rape and training them how to step in and prevent a sexually coercive event before it happens. He says this empathy-based intervention helps men to understand the trauma rape causes, making them more willing to make an effort to stop it. The study showed that men who can imagine the trauma they would feel as a rape survivor are far less likely to show sexually aggressive behavior. The study also promoted policies that teach men what consent means and discourage rape-friendly language and behavior within fraternities:

Men next learn the basics of defining sexual consent and hear strategies for confronting peers as bystanders when they overhear others tell jokes about rape, act in ways that demean women, or brag about abusing women.

Casually talking about sexual assault and telling rape jokes are frequent occurrences in fraternities. I once overheard at a frat party, “Let’s just wait until they pass out so we can take advantage of them.” (That was followed by a “just kidding”). This language about sexual violence is dangerous because it normalizes rape. As Foubert said in a New York Times opinion piece, this type of talk perpetuates rape myths:

Fraternity members are more likely to believe … that women pretend not to want to have sex but want to be forced into it, and that women enjoy being physically ‘roughed up.’

Foubert’s “Men’s Program” uses male peer educators (often from advocacy group One in Four) to hopefully create lasting behavioral changes within fraternities, including the eradication of dangerous language. Five months after going through the program, 100 percent of focus group participants reported either lasting attitude or behavior change towards rape. A number of college campuses are trying with varying degrees of success to deal with rape. Danica Wolf, coordinator of the University of Missouri Relationship and Sexual Violence Prevention Center, said the school is enforcing an anti-sexual assault initiative but that its implementation is not very consistent.

We’ve done [rape and sexual assault prevention] presentations in residence halls, classrooms and Greek chapters for almost 25 years. I would love there to be a mandatory session for all students every year. New Greek members all get an educational session about preventing rape and sexual assault. It’s not required annually through Greek Life yet, but I think that every student population needs this kind of prevention education [and] needs to show support for active prevention efforts on campus, including student organizations.

Missouri’s “Green Dot Program” relies on bystander intervention-based prevention methods similar to those of the Men’s Program. A “green dot” is described as “an individual moment that represents any behavior‚ choice‚ word‚ or attitude that promotes safety and communicates intolerance for violence.” The program is well-known around campus, and students are encouraged to participate by asking and being asked, “What’s your Green Dot?” and “Who is your Green Dot for?”

As the implementation of the Green Dot Program gains recognition, it has begun to curtail another major problem regarding campus sexual assault: the absence of women who are willing to come forward and report. Nationally, only 12 percent of college women report rape. “As people are more educated and aware of what’s going on, reporting goes up because people are finally able to give their experiences a name,” said Wolf. Educating women on what their options are is key to making sure justice is served. An anonymous member of a Mizzou sorority told me:

I have a friend who was raped while at a party one night and she chose not to report the incident to the the police because she was afraid of it becoming publicly known. The fraternity also did their best to keep the situation quiet, which is unfortunate but understandable. … [E]ven the small number of cases that go unreported are very serious, and more should be done to educate young women and men about the options and protection they have when they do believed they have been raped.

Wolf said sometimes women involved in Greek life refrain from reporting these incidents because in the close-knit Greek system they don’t want to jeopardize their sorority’s relationship with a fraternity:

When a crime is perpetrated by someone that you know, it can often be harder to report. Especially in the Greek community, where chapters are paired up for things like Greek Week, Homecoming, etc., meaning that you may potentially see the person who hurt you.

In addition to those sorts of fears about reporting, many schools’ inconsistent and insufficient sexual-assault policies discourage women from reporting rape. Among the six schools surveyed in the Tribune study, the police only investigated 171 reported crimes there since 2005 and made only 12 arrests and gained four convictions. When women feel their allegations won’t be taken seriously, they are less likely to make the painful decision to come forward. Furthermore, these broken policies leave serial rapists at large to attack more victims, as the average rapist will attack six people before he is caught, according to a study by the Center for Public Integrity.

This problem has tragically played out at Notre Dame University recently, where a freshman from the neighboring girl’s school, St. Mary’s, committed suicide after her reports of sexual assault were ignored by the school. The school is being investigated for its lack of transparency and reluctance to interview the accused rapist and gather evidence. As we’ve reported, the Obama administration has called on campuses to crack down on sexual assault. At the same time, it should be pushing the FBI to track arrest and conviction rates for sex offenses on college campuses. And on top of that, it should encourage the FBI to broaden its outmoded definition of “forcible rape” in the Uniform Crime Report, which doesn’t count rapes of men, anal rape or rapes of women who were assaulted while drunk or drugged–which, according to some studies, makes up as much of 97 percent of college assaults. I want to feel safe during my last few years on campus. I hope my school, and schools across the nation, will join the effort to make campus sexual assault a rarer and rarer thing.