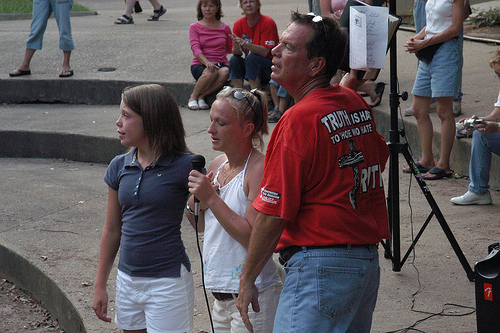 Despite a conviction just days ago for criminally stalking a Charlotte, N.C. physician, Operation Rescue/Operation Save America leader Flip Benham and his followers have traveled to Orlando, Fla., this weekend to stage a week-long “siege” of seven Orlando-area abortion clinics. In the past, such events have included targeting abortion providers–and stalking them–at their homes, as well as larger demonstrations designed to harass and intimidate patients and staff at local clinics.

Organizers from the Feminist Majority Foundation (FMF), Ms.’s publisher, are working with the Orlando clinics, pro-choice supporters and local, state and federal law enforcement to protect the clinics during the siege. According to duVergne Gaines, legal coordinator of the FMF’s National Clinic Access Project,

Similarly, another anti-abortion extremist group, Operation Rescue of Wichita, plans to lead actions later this month–dubbed “Summer of Mercy 2.0”–against the Germantown Reproductive Health Center in Maryland, where abortion provider Dr. LeRoy Carhart recently expanded his practice. Carhart is a former colleague of murdered abortion provider Dr. George Tiller and a specialist in later-term abortions, which are often due to fetal and maternal complications. The original Summer of Mercy events in 1991 were organized by Operation Rescue against Tiller in Wichita, Kan. Says Gaines,

We are outraged Operation Rescue is using the exact same slogan and the same tactics against Dr. Carhart as they did against Dr. Tiller. They should be ashamed.

Check back here to stay informed about the sieges in Florida and Maryland. You can support the FMF’s National Clinic Access Project here.

Photo of Flip Benham (in red shirt) from Flickr user marklyon under license from Creative Commons 2.0