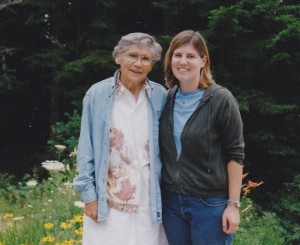 Let us go then, you and I, when the evening is spread out against the sky …

My great-aunt Kate Swift and I memorized T.S. Eliot’s “The Love Song of J. Alfred Prufrock” during one of many childhood visits to Maine. We traded lines back and forth, lying in the mossy beds of woods near her house that we called “faerie’s glen.”  I was sure if we stayed long enough we would catch a glimpse of the faeries. I thought any listening faeries would be so captivated by the poem that they would forget to stay hidden.

To an adolescent girl, my “Great-Kate” was magic herself.  She would stay up late into the night, counting stars with my brother and me. She ran her own boat, chopped her own firewood and seemed to have boundless energy for long adventures in the woods and on the water. She had the capability, strength and determination New England women are famous for, and bore more than a slight similarity to the woman in the iconic “Rosie the Riveter” poster.

As “the evening is spread out against the sky,” she pushed against the social norms of her day. Born in 1923, she was part of an incredible generation of women who demanded full and equal participation in society. Her generation blazed trails the rest of us now follow. She attended Connecticut College and then went on to journalism school at the University of North Carolina, Chapel Hill, graduating in 1944.  During World War II she served in the Army as an information and education specialist, and upon her honorable discharge as sergeant she embarked upon a career of writing and editing. Over the next 22 years she worked for the Port of New Orleans, the Girl Scouts, the American Museum of Natural History and the Yale School of Medicine. During the course of these life experiences, she became increasingly attuned to the role of language in reinforcing gendered stereotypes and assumptions about women’s participation in society.

In 1970, Kate formed a freelance editorial partnership with Casey Geddes Miller, and began working out of the home they shared that overlooked the Connecticut River. Their first project together was a copy editing assignment for a sex-education handbook for junior high school students. The author had used “he” and “his” as the default pronouns throughout the text.  Kate and Casey were struck by the absurdity and confusion generated by the then-standard use of male pronouns to refer to males and females, as well as to refer only to males. They recognized that the standard use of “he” or “him” in writing confuses the message.  Furthermore, the masculine pronouns exclude women from the conversation. Kate and Casey thus began their important effort to ensure that the language we use acknowledges the full humanity, and full possibility, of women in our society.

In 1971, the year before I was born, Kate and Casey wrote an article called “Desexing the Language”, which appeared in the inaugural issue of Ms. magazine in February 1972.  Later that year, they wrote another article for the The New York Times Magazine called “One Small Step for Genkind.”  They continued to write and speak on the importance of language in the fight for women’s equality, and published Words and Women in 1976 and The Handbook of Non-Sexist Writing in 1980.

As Kate and Casey wrote in the introduction to Words and Women,

everything we read, heard on the radio and television, or worked on professionally confirmed our new awareness that the way English is used to make the simplest points can either acknowledge women’s full humanity or relegate the female half of the species to secondary status.

“In the room, the women come and go,” wrote Eliot in “Prufrock.” Kate and Casey worked hard to make sure that the women stayed in the room and that they had a seat at the table. In addition to their writings, over the years they created and participated in an incredible network of feminist friends and advocates, and  I was lucky to meet some of them and see the impact of their work.  Some of these women attended annual feminist dinner parties at Kate’s home in Maine, sharing stories, laughter and love.

In the 1980s and 90s, as I moved through high school, college and law school, I was inspired and supported by feminists working to change the status quo.  Our language changed because of the work of feminists like Kate and Casey, and the change has had a significant impact. “Man” is no longer the generic standard, and we can now imagine women as police officers (instead of policemen), firefighters (not firemen) and as judges, presidents and prime ministers.  My great aunt’s efforts have created a world of wider opportunities for all of us.

More recently, Kate was deeply engaged in the fight for marriage equality.  She worked with the Connecticut organization Love Makes a Family in their successful effort to legalize same-sex marriage in that state.  In 2003, I worked on an amicus brief in the landmark Goodridge v. Dep’t of Public Health case in Massachusetts, which was the first state case to affirm the right to same-sex marriage. I loved sitting with her on her porch in Maine, talking through the legal and social imperatives surrounding marriage equality. She commiserated with me after Maine lost same-sex marriage at the ballot in 2009, and would have been so proud and excited to see New York’s bill signed into law last month.

“Do I dare Disturb the universe?” asked T.S. Eliot. Kate’s story, along with the narratives of the other amazing women in my family, showed me on a very personal level that I could and should “disturb the universe.” And it is my privilege to continue to do so–to continue to question, to push forward and to demand equal and fair treatment for everyone.  I am forever grateful to Kate and Casey for questioning social expectations and assumptions, and the impact of the very words we use.  There is much work to be done, but we have the tools and the desire to make change, and we can do it.