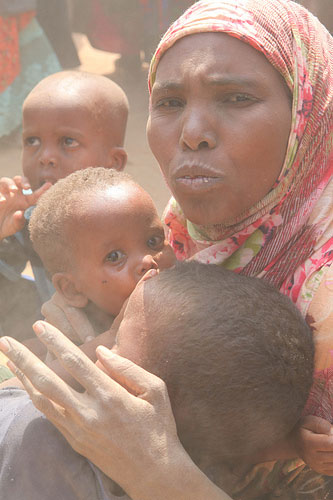 Two women have been living in the Dadaab refugee camp in Northern Kenya for two months. Refugees from Somalia’s drought, they traveled for weeks with their young children, leaving husbands behind to tend dry farms and dying livestock. They arrived hoping to find sustenance and safety within the camp.

But one day, while searching for firewood in the desert beyond the camp’s boundaries, the women were attacked. Though they escaped, they no longer feel safe going to collect wood alone. Without wood for repair, their tents are crumbling; without wood for fuel, their cooking fires are dying.

Theirs is an all-too-common story among the 1,500 Somalian refugees arriving in Dadaab every day. On July 11, UNHCR director Antonio Guterres called the current famine in the Eastern Horn of Africa the “worst humanitarian crisis in the world.” Over ten million people are in need of humanitarian aid.

And last week, UNHCR made a stunning statement: Eighty percent of the current refugee population are women and their young children. Many men are staying home to try and save what livestock and crops they have left, while mothers are taking their children on the weeks-long journey in search of food and assistance. Other young men shy away from the journey for fear of abduction by local rebel group al-Shabaab; many have already been abducted or killed.

As a result, refugee camps like Dadaab are a collection of hundreds of thousands of single mothers, more than 90 percent of whom are responsible for four or more children. In essence, the only men arriving at the camp are very young children or elderly grandparents.

The journey itself is a harrowing and potentially deadly one. Women are traveling unprotected with their children over as many as 200 kilometers of Eastern African desert. “Far too often I’ve been hearing stories of attacks and rape on their journey,” CARE spokesperson Alexandra Lopoukhine tells Ms.

During her work for CARE while based in in Dadaab, Lopoukhine has heard numerous women’s stories. One group of women (a rare group actually traveling with men) described an attack on the Kenyan-Somalian border by armed guards. Five women were raped and their few possessions stolen.

Women making the difficult journey face a Catch-22: They must remain wary of attack from passersby while simultaneously relying on them for survival. “Most of them depend on the kindness of strangers,” Lopoukhine says. ” [One woman would] wait to hear voices at night so she could go and beg for food.”

The danger doesn’t end once women arrive at the camp. Says Lopoukhine:

Women being alone does create a level of insecurity. They’ve left trauma and war, [and] refuge is a place where you [should] find some peace. [But it is] still going to be an uphill battle.

Dadaab refugee camp is the largest refugee camp in the world. Originally designed to house 90,000 people, it is overflowing, with 390,000 refugees and counting. Because there is no room in the central camp, which has paved roads and established cement homes and has been declared full since 2008, arriving families must set up makeshift tents along the outskirts.

The little protection provided women in the camp is non-existent in the tent village. There have been accounts of men entering the vulnerable tents and attacking both women and children. According to UNICEF, there were 358 reported incidents of sexual and gender-based violence between January and June of 2011.

Victims of violence in the camps have few options. Its unclear where a woman would go to report a rape, with inadequate monitoring within (and on the outskirts of) refugee camps. CARE works to provide both physical and mental health services to women who have suffered trauma, but even these counseling services may be threatened as limited resources are stretched to accommodate the overwhelming influx of refugees. “There’s been some difficulty in finding the right balances between what are the essential services,” Lopoukhine says. “More staff are needed.”

It’s a story all too familiar to feminists: When disaster strikes, women bear a disproportionate burden. It’s long been known that women are statistically more affected by poverty and hunger than men. According to University of Chicago professor Martha Nussbaum, “The differential access of women to adequate nutrition is one of the most prominent and baleful aspects of women’s inequality in the world.” But the news out of refugee camps such as Dadaab illustrates that women are hit hardest by famine’s secondary impacts–violence and insecurity–as well.

Without the continued attention of the international community, the women of Eastern Africa will continue to endure hardships compounded by gender. For how you can get involved, visit www.care.org.

A Year After the Decriminalization of Abortion in Mexico: What Latin America Can Teach the Rest of the World

Recognizing the Domestic and Childcare Workers That Help Women in Medicine Succeed
‘The Second Half’: Ellen Warner’s Portraits of Life Over 50
Alopecia Isn’t a ‘Cosmetic Issue’—It’s a Serious Autoimmune Disease