Smurf Girls Are Easy ... and Love To Shop! - Ms. Magazine
Skip to content 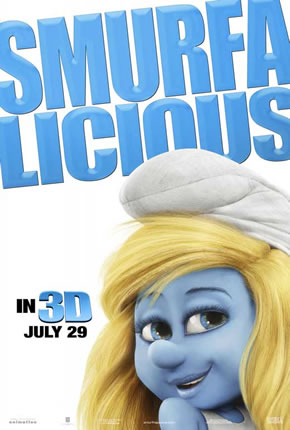 In her classic 1991 article, Katha Pollitt named the tendency in media where “a group of male buddies will be accented by a lone female, stereotypically defined” the “Smurfette Principle.” Twenty years later, this principle is still all too common–including in the new movie The Smurfs.

In the film, Smurfette–the first and usually only female Smurf–is certainly stereotypically defined, as she was in the cartoon. But in CGI her blonde locks are even more obvious, threatening to weigh down her feminized Smurf body. Near the start of the film, Smurf-antagonistic sorcerer Gargamel (Hank Azaria) has a rather creepy sequence praising “the tawny locks of Smurfette.” In a later scene, we see Smurfette distracted in a toy store, first with unicorns then with doll dresses, at which she exclaims, “Dresses! I could have more than one kind of dress. What?!?” Shortly after, she is angry when told it’s time to go, insisting “Wait! I am shopping!” She wears heels, again in keeping with the cartoon, and has a wide-eyed made-up look to her blue face.

As asked in the post “Gendering Smurfette” on the blog Feminist Media, “Why, decades after the original Smurfs were trotted out, are we still portraying the only female Smurf as an essentialized cliché of femininity?” Why indeed. Even if the filmmakers wanted to stay true to Smurf-lore, they could have brought in the later added female Smurfs Sassette or Nanny, or how about one of the witches instead of only including Gargamel?

Or, they could have made up for only one Smurfette with the inclusion of more female human lead characters. Instead of Patrick Winslow (Neil Patrick Harris) being an ad exec, why not give that job to Grace (Glee’s Jayma Mays)? Instead, she is almost entirely defined by her pregnancy and her niceness. How feminine!

At Smurf.com we learn, as we do in the film, that Smurfette was created by Gargamel to cause trouble for the Smurfs. Ah, the evil that is feminine. To add a nice twist of colorism to her origin story, she originally had black hair but it turned blonde when Papa worked all night to make her a real Smurf! She is described as “the charming Smurfette that melts the hearts of the other Smurfs. She’s one of a kind, full of feminine grace and frivolous. She can also be very much a woman, playing with the feelings of her sweethearts.” Oh my Smurf!

In the film, Smurfette uses these feminine wiles–“making sexyface” at the camera and coyly telling Patrick, “Ohh, someone looks Smurfalicious.” The poster featuring her character has the same word on it printed in huge letters, metaphorically shouting, “Look, girls, you better be Smurfalicious too. Your looks are all that matter.” In one of the worst instances of sexing-up Smurfette, she has a Marilyn Monroe moment where she models a new dress and her skirt blows up. One of the male Smurfs smirks “Are you thinking what I’m thinking?”

The emphasis on female beauty (vs. empowerment) is furthered by Patrick’s work at the cosmetics company Anjelou, where his boss Odile (Sofia Vergara), is marketing a new anti-age cream with the name “Juvenel.” In one scene, Gargamel uses his magic to turn Odile’s mother beautiful, which, by the film’s standards makes her younger, thinner and larger breasted. Odile, like Smurfette, uses her “feminine wiles” as she flirts with Gargamel in hopes she can buy some of his magic.

The film is stereotypically gendered in other regards as well. A male Smurf is told to “smurf up” (i.e., “man up”) to be a real Smurf. And when a customer tries to buy a Smurf at the toy store, he asks, “Do they come in pink? My daughter wants pink.” Ah yes, because all girls like pink. This is why Sassette–the second-ever female Smurf, who doesn’t make it into the film–wears pink overalls. Of course. Blue is for boys–and is even the name of the boy child born to Patrick and Grace at the film’s close.

Through such gendered depictions, as Pollitt argued so well 20 years ago,

“Little girls learn to split their consciousness, filtering their dreams and ambitions through boy characters while admiring the clothes of the princess. The more privileged and daring can dream of becoming exceptional women in a man’s world–Smurfettes.”

Like others of her ilk who play by and benefit from patriarchy’s rules, Smurfette is not doing women and girls any favors. Instead, she just shakes her blonde mane and coos in her Katy Perry voice, “I kissed a Smurf and I liked it.” Poor Smurfette, if only she had instead kissed stereotypical femininity goodbye.