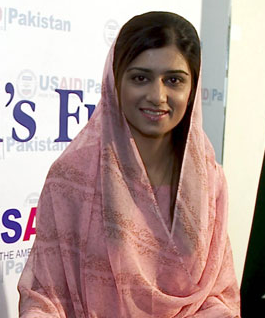 On July 19, Hina Rabbani Khar was sworn in as Pakistan’s youngest and first-ever woman foreign minister. It seemed like welcome news from a beleaguered country whose name evokes visions of misogyny and repression: bearded Taliban burning girls’ schools, rape laws that punish victims instead of perpetrators and women killed by fathers and brothers in pursuit of family “honor.” Within a week of her appointment, Hina Khar was sent off on a mission to woo India–Pakistan’s larger, powerful and often irate neighbor. And she did well, judging from newspapers around India praising her poise and style. Foreign Policy magazine devoted an entire column to her glamour, complete with a painstaking appraisal of her Roberto Cavalli sunglasses and Hermes purse.

Feminists around the world have seen this drill before: titillation disguised as admiration, puerile gushing that promotes what a woman in power wear over what she says. Such a response makes you want to jump to the foreign minister’s defense and denounce her demotion to diplomatic doll.

But here enters the other truth of global feminism–its meandering moral complexity. We also learn that the Hina Khar could not have been chosen for her experience (she spent nine months as a “junior” minister prior to being appointed) or her political prowess (she has not campaigned for elections) or her education (she has a masters in hospitality and tourism). Hina Khar’s family is also a very wealthy  landowning feudal family in Pakistan, owning hundreds of acres of orchards, fisheries and industry. In southern Punjab, where the family’s land holdings are concentrated, the landless peasants under their patronage worship them as next to God.

Rich women can certainly still be feminists, and every country has its Kennedys and Gandhis; designer last names should not exclude anyone from feminist ranks. But what is disturbing here is Ms. Khar’s resolute silence on women’s rights in a country where they are daily being decimated. She remained silent when Mukhtar Mai, a peasant woman from the very area around the Khar estate, was gang raped at the orders of a village council. She was similarly silent when, in April 2011, during the time she was serving in the Prime Minister’s Cabinet, all but one of the rapists were set free by a Pakistani court. She again failed to stand up for women, or even make a statement, when legislation that amended Pakistan’s Zina Law lapsed in June 2011, making rape victims in Pakistan open to being prosecuted for adultery or fornication if they chose to file a complaint. In fact, perusing media reports, I was unable to find a single instance when Hina Khar’s voice has ever been heard advocating for Pakistani women.

The conundrum presented by Ms. Khar reaches far beyond Pakistan: Should women in positions of power–who, in some sense, all confront patriarchy and sexism by virtue of their positions–be supported and lauded by feminists simply because they’re female? The question makes me anxious, because I also wonder if I’d rather have a feudal woman tainted with nepotism in power than a religious fundamentalist who wants all Muslim women banished to the invisibility of the home hearth. I would select the first–despite the excesses of Pakistan’s feudal classes, their enslavement of peasants, their passive refusal to educate them and their stranglehold on a country where connections determine everything–as the lesser evil against the promised repression of the Taliban. But even as I choose, I worry and wonder whether such a choice forever maligns feminism in Pakistan and other Muslim countries and weds it to the moral profligacy of leaders who can wield a Hermes bag that costs thousands before the hungry eyes of an angry, bleeding country.