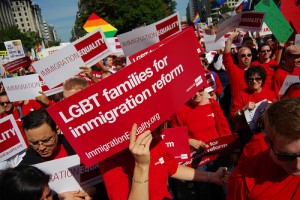 Immigrants are often scapegoats for all kinds of societal ills: a lagging economy, dangerous reproduction, even environmental degradation. Thankfully, there is a strong and growing immigrants’ rights movement that counters these attacks and highlights the real problems: xenophobia, racism and an out-of-touch immigration policy. All too often, however, immigration is portrayed as heterosexual and male. Certainly, many immigrants are straight men, but to not include an analysis on how gender and sexual orientation affect immigration is short-sighted, dangerous and unfair to immigrant women, transgender and gender non-conforming immigrants and queer immigrants.

Gender and sexuality absolutely play a part in the experience of immigrants, and though mainstream immigrants’ rights and LGBTQ liberation organizations have not traditionally acknowledged each other as constituencies, it is becoming clear that they not only have goals in common, but vocal members in common as well. If we are to fight for justice for immigrant women and families, we must acknowledge the presence of, and address the issues pertinent, to LGBTQ immigrants.

These issues begin with questions of access to services. LGBTQ immigrants must find providers that are culturally competent and sensitive to both their ethnic origins and the queer community. These services must be affordable, and yet policies such as the five-year bar [PDF] prevent many otherwise-eligible immigrants from accessing public benefits that make basic needs affordable. Employment discrimination means that LGBTQ immigrants are even less likely to have steady employment with adequate benefits, and while some states and municipalities have employment discrimination legislation for sexual orientation and gender identity on the books, formal legal equality has not turned into real equality for women, people of color, those with disabilities and other marginalized groups. While federal passage of ENDA would be a legislative victory and certainly protect some people, it is unlikely to erase the systematic nature of discrimination against LGBTQ people.

Because of employment discrimination, queer immigrants–and particularly transgender and gender non-conforming immigrants–are disproportionately pushed into criminalized activities to survive, and are then are more likely to end up in immigration detention [PDF]. Once in detention, they’re subject to dangerous practices: They may be placed in barracks according to their assigned sex rather than where they may feel safest, or in solitary confinement–which is becoming widely accepted as a form of torture. Detainees are at risk for sexual assault and may be denied adequate health care in ways that are clearly gendered.

Even queer immigrants who have a partner who is a U.S. citizen are unable to be petitioned by their partners in the way that heterosexual married couples can, and while transgender people in the same situation may be able to do so, the requirements are cumbersome and not always possible.

We must have an immigrants’ rights movement that takes gender and sexuality into account. In honor of the second annual Latina Reproductive Justice Week of Action, let us recognize issues of LGBTQ rights.  We cannot bring justice to all immigrants if we ignore some of them.