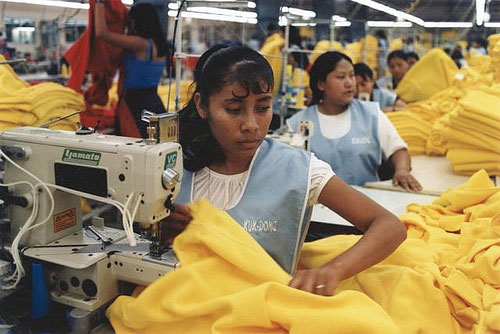 This week, another Bangladeshi woman has come forward to allege rape by managers at Classic Fashion, a garment factory in Jordan that supplies U.S.-based corporations such as Wal-Mart, Target and Macy’s.

In June, human rights NGO the Institute for Global Labor and Human Rights (IGLHR) released an 82-page report with worker testimonials that describe repeated rapes by managers at the Classic Fashion factory. These guest workers, more than 90 percent of whom are women, travel from poor countries such as Bangladesh, Sri Lanka and India to work for better pay in Jordan. They can earn up to three times the hourly wage as they could for the same work in Bangladesh–making 61 cents an hour, instead of the Bangladeshi rate of 21 cents.

Speaking from Bangladesh through a translator, 30-year-old Anowara (not her real name) told Ms. about alleged abuse inflicted on her during her two years as a guest worker at Classic Fashion. “I came here to talk so that [the abuse] will never happen again,” Anowara said. One year ago, Anowara said, she stayed home from her work in the factory due to illness:

I was sleeping in the dormitory, in the company house, and I was sick. … Then [a supervisor] entered into my room and he closed the door and raped me. [He] did not allow me to complain to the management. … I wanted to complain, but he forced me to leave the country. … [He] told me to go to the medical [center] and I had no idea where I was taken. Instead of taking me to the hospital he took me to the airport to deport me.

There are women workers that are raped in Jordan, but because they are afraid of deportation they usually keep silent. … We are very much afraid of deportation and police harassment. If we say publicly what the men do, immediately we are deported. It is a huge loss for us, because our families are dependent on our income.

Because rape victims are stigmatized in her culture, Anowara said she was forced to lie about her experience when she returned home. Her translator and director of IGLHR in Bangladesh, Rafiq Alam, explained to the Ms. Blog:

She had a contract for three years and after two years the management deported her. … It is a huge loss for her family. … [Her family] was asking her, ‘Why did you come back?’ She had to tell lies to her family and to her husband that she was sick. … She had one year left. In one year she could have made $700, maybe $1,000, and that has affected her family and economic status.

Anowara hopes her testimony will move Americans to fight the injustices linked with big-name U.S.-based companies. Despite IGLHR’s campaign with Change.org to improve the conditions of the workers at Classic, American companies have yet to take any action on the rape allegations. IGLHR director Charles Kernaghan said he’s frustrated with how the reports are being received:

I actually thought that when we revealed [the abuse] there would be a state of shock and we could have some serious meetings, get to the bottom of the factory and get these [alleged] rapists in prison. And the direct opposite happened. They said there was no such thing and it’s all lies.

The lack of response from the Jordanian government and the American companies that buy from Classic has led Kernaghan to try to hit the companies where it hurts–in the pocketbook:

The power of the American consumer is huge and I don’t think people understand that—how strong we really are if we raise our voice[s] together. And there’s also no reason, in the long run, that we can’t win legislation to protect the rights of human beings at least as much as the corporate product. We ought to be able to do that. We can’t be such a dysfunctional country that we can allow the corporations to protect their trademarks, their Barbie dolls, but we can’t protect human beings. That’s completely crazy.

Change.org urges readers to join their petition campaign (see below) on behalf of the workers and to write posts on the Facebook walls of Target, Wal-Mart, Hanes and Macy’s. Change.org staffer Amanda Kloer sees the campaign as a concrete way for those in the U.S. to get involved with what might, at first, seem a complex issue in a faraway place:

What we’ve tried to do with this campaign is say, ‘It’s difficult to change the whole system, but here’s one thing that you can change.’ And to really empower people as consumers to lift up their voices and demonstrate their power, and to participate in changing things in this one factory in Jordan.

If the allegations prove true, the conditions at the Classic factory are unacceptable. At the very least, the cases of these women who have reported rapes must be taken seriously by Jordan officials.

“I want justice,” says Anowara. “This is my [plea] to the American people. The criminals should be punished.”

The original Change.org petition has closed, but you can sign a follow-up petition here.