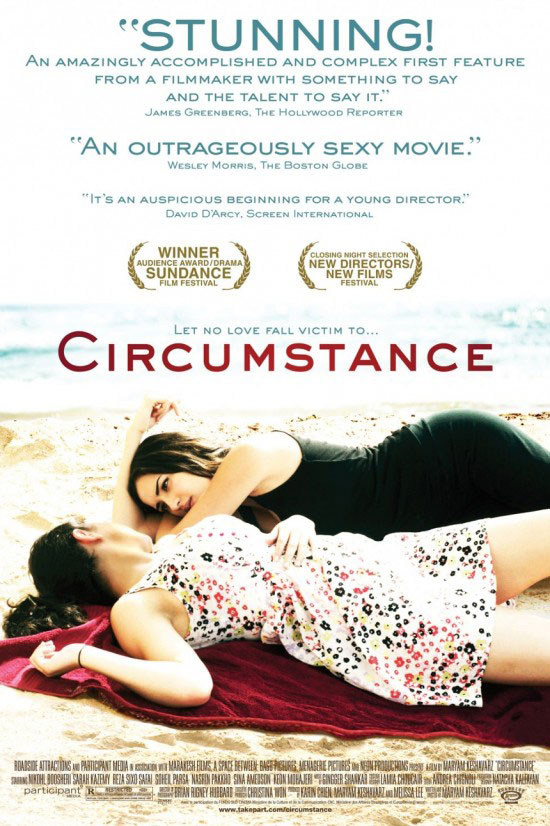 Iranian American director Maryam Keshavarz had a story of modern-day Iran that she thought needed telling. A story for which she and her cast were willing to give up the right to revisit their homeland after the film came out. Fortunately, the film Circumstance, an Audience Award-winner at the Sundance Film Festival which will open in selected theaters on August 26, seems worthy of their huge sacrifice.

Circumstance centers on the intense friendship of young Atafeh (Nikohl Boosheri) and Shireen (Sarah Kazemy) as it develops into a hidden affair. Scattered early scenes set to a thudding soundtrack of Persian hip hop show them trying ecstasy at an underground party and joining their male friends in graffiti-ing a wall. In some ways, the first physical encounters between the two girls seem like just another form of that same rebellion. But when Atafeh crawls into bed with a crying Shireen, comforting her over the loss of her parents, their romantic relationship fully develops past mere sexual exploration.

Circumstance does an excellent job conveying the status of women in Iran today–particularly those of the more liberal, westernized upper classes. After Atafeh and Shireen are arrested for some unknown reason while driving, their interaction with the police leaves one of the most lasting impressions of the film. Shireen is called a whore, accused of prostitution and made to stare at a wall while two men berate and interrogate her about her parents’ anti-regime past. Atafeh is subjected to an invasive virginity test, dealt with subtly but effectively by first-time feature director Keshavarz. When it’s discovered that Atafeh has been sexually active, her liberal father is shamed and blackmailed for not “controlling” his daughter.

Even the most innocent acts become the object of scorn: Atafeh’s brother Mehran–a religious conservative who Shireen is essentially forced into marrying–forbids his wife from singing in front of guests at a family party, and advises his father to similarly censor Atafeh.

Keshavarz gives us a nuanced look at the lives of modern mostly upper class Tehrani women, showing both their publicly modest lives as well as the underground raves and parties they escape to. As the filmmaker told AfterEllen:

I think that in a world where social interactions, women’s bodies, all these things are controlled by the state, even the smallest things are political. Not political in what we consider in the Western World, marching in the streets, but politics of relationships, politics of body.

The young women live in an environment where they must hide any sexual expression, much less a homosexual relationship. While Keshavarz excellently depicts the claustrophobia and double-life experienced by every character in the film, I did hope Circumstance would provide more of a clear insight into what it means to be gay and living in Iran today. LGBTQ Iranians (both out and suspected) are victim to wide-ranging abuses from police and private citizens alike. Homosexuality is expressly forbidden by the government, and in many cases punishable by death. In a Human Rights Watch report, Middle East director Sarah Leah Whitson said:

Members of sexual minorities in Iran are hounded on all sides. The laws are stacked against them; the state openly discriminates against them; and they are vulnerable to harassment, abuse and violence because their perpetrators feel they can target them with impunity.

Because Shireen and Atafeh’s relationship is never fully revealed to family, friends, or society, the audience never sees a true collision between their forbidden love and conservative social norms. Shireen endures Mehran’s controlling paranoia in order to stay close to Atafeh, even if their relationship is reduced to late-night encounters and stolen glances while washing dishes.

When Mehran discovers their affair, that could have been an opportunity to more fully explore the stigma suffered by LGBTQ individuals in Iran today. But his response, to me, seemed the same as it may have been were Shireen sleeping with another man. He reacts violently and demands, “Aren’t I enough?” The intensity of the scene addresses his own jealousy and insecurity, but none of the outrage and shock at discovering his wife is having a much-forbidden lesbian affair.

Yet Keshavarz insists that she never set out to create a film about lesbian Iranians. As she told AfterEllen:

[It] was important to me that … it would not be about one issue, because I think that even if you peg these women or say that they are queer, that is [but] one of the many identities that they embody in the film.

While other artists and filmmakers have worked to specifically address the plight of out LGBTQ Iranians, Keshavarz has said repeatedly she wanted instead to tell a multilayered story focusing on the whole family’s struggle rather than just about the women’s relationship. But while Keshavarz has said she didn’t want to make a political film, this story will inevitably have political repercussions. Keshavarz herself implied any statement in an oppressive society is a political one. And the fact that Keshavarz and the actors in the film, most of them Iranian American or Iranian Canadian, cannot now safely return to Iran for fear that they won’t be allowed to leave again, is a huge political and personal act.

They were willing to make that sacrifice–whether it was for the cause of LGBTQ Iranians, for women or simply for freedom of expression. When the curtains fall on Circumstance, Keshavarz and her cast should be applauded for the risk they took to give voice to thousands of silenced gay and lesbian Iranians, let alone the politically and socially repressed Iranian people as a whole.

Promotional poster for the movie.