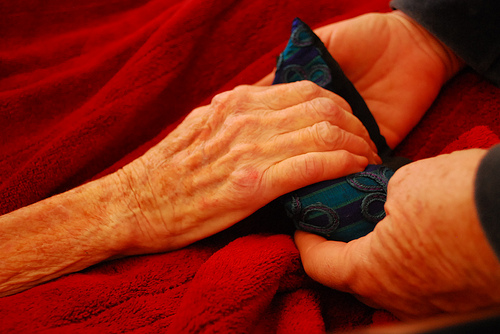 Every month my paycheck is a little less because of Medicare and Social Security. In my thirties, I find it difficult to truly appreciate what this contribution means down the line. But my friendships with elders like Juana and Josie have brought home for me how crucial these programs can be.

Juana is a single mother of eight. She is 92 years old, and she still cares for her kids and her community.

She bakes flan for the deacons at church and washes the holy linens. She rises at 6am to cooks rice and beans for her children (most of whom live in neighboring cities), cuts their hair, and when they feel ill, makes healing tea with herbs from her garden. Everyone in her struggling neighborhood calls her “Mama.” And when 9/11 happened, she wrote a poem in honor of the dead and her beloved city, boarded a bus to Manhattan, and distributed thousands of copies to strangers.

Half a lifetime of low-wage work in New York City factories did not enable Juana to save. Without that monthly Social Security check, Juana would not be able to afford the run-down duplex she shares with her daughter, the TV that keeps her cheering for her beloved Yankees, or the rice and beans.  Without Medicare, Juana would not be able to afford the preventative tests or the annual check-ups. In fact, without subsidized health care, who knows if Juana would still be dancing to her favorite Reggaeton song, “La Gasolina” as she cooks in her kitchen.

Josie is 102 years old. At the historic women’s club in our town, Josie was the first to wear long pants. Back in the 1930s and 40s, after her shift doing the books at the railroad, Josie would usually stop by the club to play cards with the ladies. I met Josie when she was celebrating her 100th birthday at the club.

Josie was lucky to have a job, and when her father died young, she quickly became the family breadwinner. Josie lived alone most of her adult life, but for long periods of time she took friends and family members in, and cared for them.

Today Josie lives in a nursing home. She doesn’t have children to lean on. She is blind.

Josie’s Social Security check and routine health care covered by Medicare allowed her to stay at home and care for herself into her nineties. And now that she has used up all of her savings, it is Medicaid (for the poor) that pays for her long term care.

Juana and Josie are part of the fastest-growing age group in America, an age group that is two-thirds [PDF] women. A sizable portion of women in their age group live at or near the poverty line. (And this is based on out-dated poverty estimates that don’t include health costs and increases in cost of living, for example.) In fact, it is programs like Social Security and Medicare that keep Juana and Josie hovering just above poverty level, able to afford food, rent, and out-of-pocket health costs. Juana and Josie worked long and hard to care for others and contribute to our country. Now today’s workers’ contributions are caring for them.

The truth is, most of us will end up like Juana and Josie. As we live longer, we are more likely to exhaust our resources on the cost of living and the ever-increasing costs of care. Like Juana and Josie, our hard work ought to insure a secure old age. While imperfect, these are programs that work. Don’t mess with a good thing.

For more lessons from elders, see Meika Loe’s forthcoming book, Aging Our Way: Lessons for Living from 85 and Beyond (Oxford University Press, September 2011).