"That Takes Ovaries"-A Play for the Bold and Brazen - Ms. Magazine
Skip to content 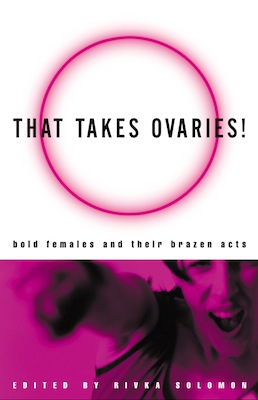 Some may be tempted to liken Rivka Solomon’s and Bobbi Ausubel’s play That Takes Ovaries to The Vagina Monologues because they’re both collections of women’s stories and they’re both named after parts of a woman’s anatomy. But the ovaries in this play are purely metaphorical (whereas the vaginas were, well, fully embodied). These ovaries are the women’s version of cojones.

In the play, which will be presented this Sunday in Los Angeles, and in Solomon’s original book by the same name, women recount times when they have fought back, when they have resisted oppression, stopped violence or otherwise spoken out. The collection of first-person rebellion narratives is culturally diverse, fun and touching.

Joani, for example, tells the story of opening the country’s first sex-toy store for women. Alison tells of a “pee protest” she staged to secure wheelchair accessible toilets on her campus. D.H. Wu talks about keeping her mother from killing herself.

As Solomon proclaims in the introduction to the book:

Having ovaries isn’t about possessing certain sex organs or chromosomes. It’s about being female identified and possessing a certain Attitude (with a capital A). All types of women and girls are welcome here, including females born without ovaries, those who’ve had ovaries removed, those who acquired new plumbing via medical intervention, and intersexed and transgendered folk who identify, or who have ever identified, as women.

“Ovaries,” in this context, is a character trait that allows women to be bold, brazen, gutsy and outrageous. Though many of the stories involve abuse, discrimination and other acts of hate, the point of them is to show the ways women have overcome, if only momentarily, those negative forces. The women of Solomon and Ausubel’s play show us what it means to fight back, to stand up and say I’m not going to take it anymore.

This play has real potential to truly empower not only the women who tell these stories in performance (three actors will play all the parts in this production) but also the people in the audience. In fact, a regular feature of the play is an open mic afterward, during which audience members are invited to tell their own stories of ovarian acts of bravery. According to the theories of political theater practiced by Bertolt Brecht and Augusto Boal, among others, this breakdown of the performer-audience barrier is essential to encouraging audience members who see a political play to go forth and overthrow existing conditions. That Takes Ovaries enables women to speak up not only after abuse but sometimes during it; it provides tools by which we can change our situations and fight back.

The performance this Sunday is at 2:30pm at the Stella Adler Theater in Hollywood. It benefits the Los Angeles Women’s Theater Project, a nonprofit organization dedicated to the education, support, promotion and production of live performance projects that are of interest and benefit to women. A brief open-mic afterward will allow audience members to share their own bold, brazen, ovarian acts.

I’ll be there. I think you’ll want to be there, too.