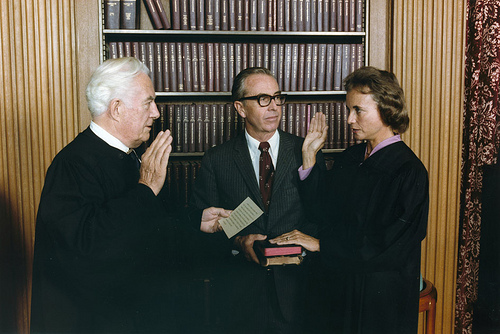 Chief Justice Warren Burger, one hand on Sandra Day O’Connor’s arm as they descended the steps of the Supreme Court just before her 2 p.m. swearing-in ceremony on September 25, 1981, shouted to reporters, “You’ve never seen me with a better looking justice.” Society pages cheerily noted that she and Byron White were the first Supreme Court justices ever to dance with each other—at least on a ballroom floor. Justice O’Connor wasn’t chosen because she looked the part, but the fact of her lavender suits and pearls did smooth the way. As she herself said about running for office, “It was simply a matter of political reality that … a woman had to appear and act ‘feminine.’ People gave up their traditional notions only grudgingly.”

After graduating Order of the Coif from Stanford Law School, the only position she was offered by California firms was legal secretary. She took several years off from her career when her children were young; it never occurred to her husband and her, she has said, that he might stay home while she worked. And when Ken Starr came to her home to interview her for the position on the Court, she served a lunch of salmon mousse salad she’d prepared before he arrived.

These traditional notions didn’t all fall away with her appointment, either: On hearing Justice O’Connor was at a restaurant, other diners would sometimes walk over and mistakenly shake her husband’s hand, saying how honored they were to meet a justice. And one of the 60,000 letters she received in her first year—more than any other justice in history—began, “Back to your kitchen and home female! This is a job for a man and only he can make the rough decisions.”

But with her first rough decision, in Mississippi University for Women v. Hogan, she began the process of changing the law of gender discrimination, and changing those traditional notions along with it. When then lower-court judge Ruth Bader Ginsburg brought the opinion home to show her husband, his response was, “Did you write this?”

Justice O’Connor was the swing vote in Price Waterhouse v. Hopkins, finding discrimination had been “a substantial factor” in a decision not to promote a woman to partnership. She was the deciding vote in Jackson v. Birmingham Board of Education, establishing that employers may not retaliate against employees who complain of discrimination. In Davis v. Monroe, her vote allowed a girl who’d been subjected to relentless sexual taunts by a classmate to sue the school for allowing the hostile environment to go unchecked.

She voted to uphold the right to sue state employers for violating the federal Family and Medical Leave Act. And although she did vote to allow limitations on abortion rights, she refused to overturn Roe v. Wade.

The next Reagan appointee, conservative wing anchor Justice Antonin Scalia, noted on her retirement that O’Connor “shaped the jurisprudence of this Court more than any other Associate Justice.” The self-described FWOTSC (First Woman On The Supreme Court)—a moniker she took on in response to a New York Times piece mentioning “the nine old men” of a Court which had included her for two years—wasn’t always applauded by feminists, especially in her votes allowing abortion rights limitations and in her ruling in Bush v. Gore. But her judicial dancing shoes kicked the shards away from at least one glass ceiling, setting up a ladder for Justices Ginsberg, Sonia Sotomayor and Elena Kagan, and for the possibility that the “nine old men of the Court” might someday be nine women, old or young.

Photo from the U.S. National Archives.

All information not otherwise cited is from Joan Biskupic’s Sandra Day O’Connor: How the First Woman on the Supreme Court Became Its Most Influential Justice.

Meg Waite Clayton is the author of the novel The Four Ms. Bradwells, a Ms. Summer Recommended Reads selection about a woman nominee to the Supreme Court.