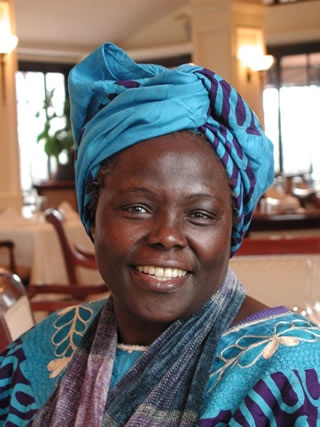 Fearless human rights and anti-poverty crusader. Visionary environmental leader. Global women’s rights activist. Advocate for democracy. More than one phrase is required to begin to sum up the contributions the late Dr. Wangari Maathai made to the global community through her tireless work for a more just and sustainable world.

Maathai pioneered a new, grassroots form of global environmentalism when she founded the Green Belt Movement in 1977 to harness the power of rural Kenyan women to address the challenges of deforestation, soil erosion and lack of water in Kenya by planting trees, and to provide Kenyan women and girls with firewood for cooking and access to clean water. The movement has planted 40 million trees across Africa; but its influence has been even broader. Kenyan journalist Joseph Kabiru writes:

I already see her true legacy: ordinary men and women in rural communities around the world, from Cambodia to Brazil, who take her as their inspiration when standing up against the logging companies, exposing collusion and corruption by the authorities, and protecting their forest heritage for future generations.

Maathai’s leadership in the global environmental movement was always coupled by commitments to peace and to women’s empowerment, issues she saw as inseparable from ecological sustainability. In an article last December, Maathai challenged the international community to extend land and political rights to women, saying:

If the international community is serious about addressing climate change, it must recognise women as a fundamental part of the climate solution.

Upon news of Maathai’s death on Sunday at age 71, President Ellen Johnson Sirleaf of Liberia said:

In recent years, Maathai has received a number of honors for her work, including the 2004 Nobel Peace Prize. In 2005, Maathai was honored by Time magazine as one of the 100 Most Influential People in the world and by Forbes magazine as one of the 100 Most Influential Women in the world. In 2006, she was given the Feminist Majority Foundation’s Global Women’s Rights Award. However, her fearless activism has come at a price. Maathai has been harassed, beaten unconscious, humiliated and jailed. Yet she has never faltered in her commitment.

Maathai was ever mindful of future generations. In her 2004 Nobel Peace Prize acceptance speech, she said that she hoped her winning would “encourage [women and girls] to raise their voices and take more space for leadership.” May we honor the courage, vision, and legacy of Wangari Maathai. In her words, “We must not tire, we must not give up, we must persist.”

Watch Maathai herself talk about the peace, sustainability, and women’s rights: