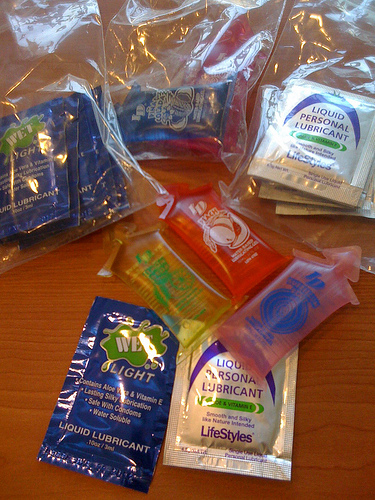 Q: Why don’t I produce enough natural lubricant during sex? There is nothing wrong with me physically. I’m 34 now, but I’ve always been like this! I’m envious of women that talk about how wet they get. Men always ask me why I don’t get that wet. I feel like something is wrong with me. I don’t want to depend on KY for the rest of my sex life. There has to be a solution other than use lubes!!!! From my understanding there are glands near the entrance of the vagina that are supposed to produce lube to help the penis enter the vagina. I don’t think mine work!!! Doctors just say use lube. Help!!!

Every now and then, when I find this concern in my inbox–essentially, this notion that wanting or needing an additional lubricant is some kind of personal failure, or that going without one has some sort of elevated status–I just sit here and scratch my head. Because I see people getting really upset over something they don’t have to.

I certainly get women having issues about vaginal dryness: that’s common, particularly when we’re talking about vaginal sex and heterosexual women. (And I’d put little stock in what a guy tells you about it per his previous female partner; let’s listen to what women have to say for themselves.) But the idea that people are constantly flooding the bedroom with vaginal lubrication every time they have sex just isn’t based in reality.

I also get why people have the idea sex should somehow be movie-screen seamless all the time, at any time, without making any adaptations–there are a lot of sources that enable those unrealistic ideas. But in fact, women’s pleasure during partnered sex, particularly as something separate from men’s pleasure, is something that has really only started to be widely addressed in the last 100 years. Historically and even now, a whole host of sexual norms based primarily on cultural ideas of men’s ideas and wants have meant that a lot of women have had a lot of not-at-all pleasurable sex.

Sexual lubricants are nothing even remotely new. They couldn’t always be purchased in stores, but for as long as people have been having genital sex, people have used all manner of things as a sexual lubricant: butter, oils, honey, saliva, animal fats and guts–you name it, if it’s slippery, it’s probably been used as a lube.

Here’s the part I don’t get: If a lubricant makes sex feel better, why not use it?

There are likely any number of things you do in your life that aren’t “natural” or organic. It’s likely that not all of your clothes are homemade ones created with organic fibers, for instance, and that you eat foods with preservatives or flavor enhancers. I might better understand this attitude about lube coming from die-hard naturists, but more often than not, I’d say that the women who send me lube worries are fine with every other aspect of their lives being less-than-100-percent-organic.

Let’s take this idea about “natural” sex to its logical conclusion. That would also mean going without most methods of birth control, protection from sexually transmitted infections or reproductive health care. Heck, it would mean not using the Internet to ask me this question in the first place. I think it’s reasonable to presume, then, that if and when a vagina is not lubricated enough, or at all, then one could conclude that the “natural” thing is for vaginal entry to just be uncomfortable or painful. And that maybe then, it’s “natural” for some kinds of sex you want to engage in for the sake of pleasure not to be pleasurable at all.

And I just don’t buy that way of thinking.

It is normal for women to sometimes not be wet enough for comfort and pleasure throughout all of a sexual endeavor; and for some women, it’s normal all or most of the time. We do have glands which produce vaginal lubrication when we are aroused, but how much we produce tends to depend on a lot of different factors: Not only does lubrication vary from woman to woman, but we won’t always produce the same amount every day, every year, every decade, in every relationship or in every sexual situation. How lubricated we are also is related to our fertility cycle and the chemical changes in our bodies: When we’re most fertile, our cervical mucus is very thin, fluid and slippery. During pregnancy, women often have increased amounts of vaginal discharge.

Vaginal dryness can also occur for other common reasons, including: medications (such as contraceptives, antidepressants or allergy medicine); smoking; health issues (like diabetes, hysterectomy, pregnancy, yeast or bacterial infections, sexually transmitted infections or allergies); dehydration; cancer treatments; low or decreased libido; not having sex as often as you’re used to; menopause or perimenopause; stress, fatigue, depression or anxiety; and chemical sensitivities to things like detergents.

But for people your age, the most common reason for vaginal dryness is a plain old lack of high sexual arousal or desire: not being as turned on as you could be. Sometimes, we’re just not feeling it with a partner. It’s also possible what you think is a lot of sexual arousal may not be so much after all–it may just be the most you’ve experienced so far, and as your life goes on and you have new attitudes and experiences, you may well discover you can be a lot more aroused.

So, what would I suggest as a plan of action for persistent vaginal dryness that’s got you so upset and doesn’t seem to be about a health issue?

Of course, if you just do NOT want to use lubricants, you don’t have to. That is likely to make some kinds of sex, or sex sometimes, less pleasurable or more uncomfortable. It also can mean things like winding up with UTIs or other infections more frequently. But if you feel better with those risks, you get to make that choice. Again, at times when you’re not lubricating, you also have the option of simply not having the kinds of sex where you need lube added, such as oral sex.

But it shouldn’t crush your ego to need or want lube, any more than it should crush your ego to need or want a haircut, salt on your food or to live in a decent neighborhood. Adding something to increase our enjoyment has nothing to do with our self-worth or with “succeeding” at sex. And using lubricant–whether it’s a need or a want–or being dry sometimes does not make a woman any less of a woman, does not make anyone less sexy, does not mean something is wrong with your body or your sexuality. Is a man not a man because he isn’t erect on demand or all the time? No? (Hint: Your answer should be no.) Well alrighty, then.

Speaking of men, I get letters from men saying they don’t like wetness. I get the same letters when it comes to dryness. However, I can’t recall a single time when I have ever gotten a letter from a man who has a problem with using lube himself or with a partner (perhaps in part because plenty of men use it for their own masturbation). So, when I hear someone tell me what “men” love, it’s always filtered by the knowledge that there are no absolutes with anything to do with sex. People of all genders like and dislike many different things.

Lube feels good. I don’t know about you, but one big reason I engage in sex is to feel good. That strikes me as perfectly harmonious. I don’t feel like I’m failing in any way when my partners and myself are feeling really good and sex rocks.

Obviously, you get to make up your own mind here and make your own choices. But I’d suggest that no matter what choice you make, an attitude adjustment on this stuff–not just on lubricant, but on not comparing oneself to other women and on realistic ideas about sexuality and the way your body functions–is going to benefit you. Most of what I hear in letters like this is that the attitudes expressed and the stress they create are getting you down far more than the issue of lubrication. And I’d say it’s certainly natural to change our attitudes or ideas for the sake of a healthier sexuality and self-esteem and a sex life we enjoy more.

Have a sex, sexual-health or relationships question you want answered? Email it to Heather at sexandrelationships@msmagazine.com. By sending a question to that address, you acknowledge you give permission for your question to be published. Your email address and any other personally identifying information will remain private. Not all questions will receive answers.

Heather Corinna is the executive director of Scarleteen, the inclusive online resource for teen and young adult sexuality education and information she founded in 1998. She is the author of S.E.X.: The All-You-Need-to-Know Progressive Sexuality Guide to Get You Through High School and College; a co-founder of the All Girl Army; and director of the CONNECT sexual health outreach program for King County, which primarily serves homeless and transient youth. She is on the editorial board of the American Journal of Sexuality Education, a writer and contributing editor for the 2011 edition of Our Bodies, Ourselves, a member of the Board of Directors for NARAL Pro-Choice Washington, and her sexuality advice is also syndicated weekly at RH Reality Check. Heather was the winner of The Champions of Sexual Literacy Award for Grassroots Activism from the National Sexuality Resource Center/SFSU in 2007; in 2009 the winner of the Society for the Scientific Study of Sexuality, Western Region's Public Service Award and the Our Bodies, Ourselves' Women's Health Heroes Award. In 2011, Scarleteen won a Seattle Web Award for Best Nonprofit Website. A Chicago native, she now lives and works on an island in the Pacific Northwest.