A 17-Year-Old Does SlutWalk - Ms. Magazine
Skip to content 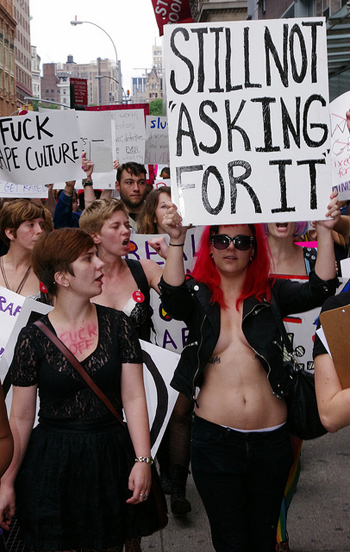 At the crack of dawn I sneak soundlessly into my mother’s bedroom. Luckily, it rained last night, so the sky is wet and dark and soporific, so I don’t wake her. I tiptoe over to the closet, which looks like the holy arc in synagogue where they keep the Torah, and in my nervous haste I fling open both doors. What I sinfully steal is not the Five Books of Moses but a tight sequined black dress. I pull the skimpy thing over my 17-year-old hips and shoulders, zip it up with a herculean effort, and dash out the front door and to the local bus stop.

Reading this, I am sure you’ve reached the conclusion that I am on my way to a Goth party or a Satanist convention or a boy’s house or even the circus–but such is not the case. I am headed to a SlutWalk rally in New York City–a march against victim blaming. A march against the notion that a woman’s dress is somehow a “yes” to rapists. SlutWalk is a march of solidarity.

When I arrive in Union Square, the activists have already set off. So I set off at a run, following the resonant chants of “Blame the system not the victim!” and “NYPD, rape is a felony!” I run (and not without catcalls and whistles, mind you) from 14th street down to where 8th street turns into St. Marks Place. When I catch up and catch my breath, I look around me: There are women in burlesque attire, women in plain clothes, women holding signs and women dancing on poles. One woman hands me a round red “Ethical Slut” pin, which I attach to my dress. Another tells me to open my hand and when I do she pours out glitter. People with cameras are snapping shots of a girl in a leotard who holds up a sign reading “Sluts Say Yes.” Another woman’s sign declares “I’ll Be a Post-Feminist in the Post-Patriarchy.”

I am at home here, despite the fact that it’s unlikely I will locate my friends and acquaintances who are also participants. But everyone is a feminist here, and because of that I am empowered. Because of that I join the chanting: “When women’s rights are under attack, what do we do? Stand up fight back!”

Aha–I spot a voluminous and curly head of hair! It is Tyler, a friend from high school, and he is walking next to a beautiful and conservatively dressed girl holding a sign reading “This Is the Outfit I Was Raped In.” I find myself chanting louder.

When we return to Union Square, we congregate to listen to activist poets and musicians in the incipient rain. There is Isidora, a friend of mine who started a feminist magazine at Columbia University entitled The Feminist Mystique. Her boyfriend is wearing a black shirt that says in pink letters “This is what a feminist looks like.” We clap as we listen to the speakers; we snuggle deeper into our sweaters. “My body is not a cocktail party,” says one poet through the microphone, and the crowd is clapping responsively.

The whole thing is a consensual love affair.