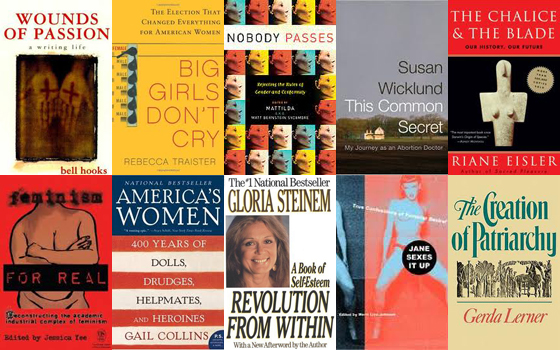 The next 10 books picked by Ms. readers take us on a journey through history, from 20,000-year-old goddess worship to the 3,500-year-old origins of patriarchy to 400 years of U.S. women’s history all the way up to the 2008 presidential bid of Hillary Clinton. Next, bell hooks and Gloria Steinem get personal by looking at feminism in their inner/intimate lives–while another group of feminist writers just cuts straight to the sex. Last, two collections plumb insider/outsider status: A Native woman questions feminism’s home in academia and a trans editor wonders if anyone ever “belongs.”

60. Wounds of Passion: A Writing Life
by bell hooks
Henry Holt & Co., 1997
In this intimate and provocative memoir by the author of Ain’t I a Woman: Black Women and Feminism, hooks explores how she found her voice as a writer as well as the possibility of feminist relationships. (That’s bell hooks’ third appearance–not that we’re counting). Find it here.

59. Nobody Passes: Rejecting the Rules of Gender and Conformity
by Matthew (Mattilda) Bernstein Sycamore, editor
Seal Press, 2006
This collection of essays on the relationships between identity, categorization and community questions the whole idea of belonging by asking, What lies are people forced to tell in order to gain acceptance as “real?” Find it here.

58. This Common Secret: My Journey as an Abortion Doctor
by Susan Wicklund
Public Affairs, 2007
Beginning with the story of her own abortion, Wicklund’s account of more than 20 years as an abortion doctor, during which she receives threats to herself and her family, paints a vivid picture of the front line of the fight for reproductive rights. Find it here.

57. Feminism FOR REAL: Deconstructing the Academic Industrial Complex of Feminism
by Jessica Yee, editor
Canadian Centre for Policy Alternatives, 2011
The essays in this collection deal with the difference between theoretical and lived feminism by asking, Where did feminism come from? Who gets to decide what it means? And why doesn’t that definition fit everyone? Find it here.

56. America’s Women: 400 Years of Dolls, Drudges, Helpmates, and Heroines
by Gail Collins
William Morrow, 2003
From the lost colony of Roanoke through wars, suffrage, and civil rights to the present, this extensively researched and engagingly written social history by the noted New York Times columnist chronicles what women in America have done and why. Find it here.

55. Big Girls Don’t Cry: The Election that Changed Everything for American Women
by Rebecca Traister
Free Press, 2010
Salon.com’s Traister weaves her own story of covering the 2008 election as a woman into the narratives of Hilary Clinton, Sarah Palin, Katie Couric, Tina Fey and Michelle Obama to paint a picture of a transformative year for American women and the nation. Find it here.

54. Revolution from Within: A Book of Self-Esteem
by Gloria Steinem
Little Brown & Co., 1992
Sharing insights from her own psychological journey toward wholeness as well as the stories of Margaret Mead, Alice Walker, and her friends and colleagues, the founder of Ms. provides a variety of pathways to overcoming denigrating social messages and finding self-esteem. Find it here.

52. The Creation of Patriarchy
by Gerda Lerner
Oxford University Press, 1986
This gender-based analysis of Western Civilization uses historical, literary, archaeological, and artistic evidence to trace the development of patriarchy, dating its origin to the second millennium B.C.E. Lerner argues that because men’s domination of women is historical and not natural, it is therefore alterable. Find it here.

51. The Chalice and the Blade: Our History, Our Future
by Riane Eisler
Harper Collins, 1987
Drawing from archaeology, art, religion, anthropology, sociology, politics and economics, Eisler’s magnum opus describes early civilization’s shift away from a goddess-worshipping, egalitarian culture to one defined by patriarchal hierarchies. Find it here.