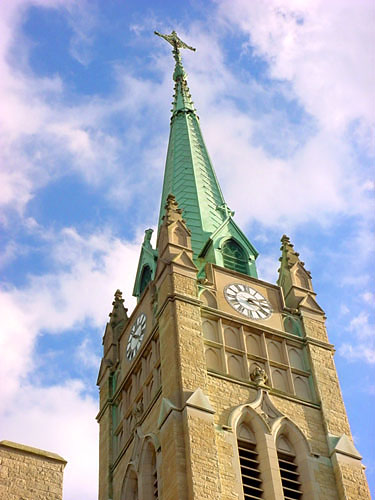 The world waits with bated breath to see if the International Criminal Court will take up a case filed by Survivors Network of those Abused by Priests (SNAP) and the Center for Constitutional Rights (CCR) against the Pope and three other high-ranking Vatican officials over sexual abuse cover-ups. Meanwhile, more allegations of both priest abuse and church cover-ups have broken this week.

A lawsuit has been filed against the Belleville, Ill. Diocese alleging abuse by former priest Raymond Kownacki. According to the St. Louis Post-Dispatch, the victim, named only as John Doe S.W., says that he was abused while an altar boy at St. Mary’s Catholic Church in Valmeyer, Ill. between 1985 and 1987. The priest allegedly “coerced and threatened” the 16-year-old in order to prevent him from reporting the abuse to anyone.

Doe says he repressed the abuse and only later remembered it when he began working as Kownacki’s caretaker. Kownacki asked Doe to contact people who had “sex abuse claims” against him. Doe refused, and that’s when he had “flashbacks” of his own abuse at the hands of Kownacki. He then decided it was time to take action against the pediphile priest.

Kownacki has a long string of sexual abuse allegations against him. This past August, a jury verdict led to a $6.3 million settlement to James Wisniewski for sex crimes committed by Kownacki dating back to the 1970s. A former housekeeper of Kownacki’s accused him of “raping, beating and performing an abortion on her in the 1970s.” Kownacki was then surreptitiously moved to other churches until he was removed from the ministry in 1995.

The Post-Dispatch added that Kownacki, now in a St. Louis retirement home, when asked about the Doe case replied, “I don’t care” and “It doesn’t bother me.”

Next door in Missouri, a group of 44 abuse survivors has filed what SNAP calls an “unprecedented” lawsuit.

The survivors won a settlement in a 2008 case charging the Kansas City diocese with child-sex-abuse cover-ups. Now, they are accusing the diocese of breaking 19 non-monetary conditions of the settlement. The survivors allege that the diocese has kept two priests–Fr. James Tierney and Fr. Shawn Ratigan–in the minsitry despite credible abuse allegations and failed to defrock four others as promised. SNAP believes this is the first time a follow-up suit has attempted to hold a diocese to the conditions of a settlement.

ABOVE: St. Peter’s Cathedral, the mother church of the Roman Catholic Diocese of Belleville, in downtown Belleville, Ill. Photo from Wikimedia Commons.