Thoughts on SlutWalk from a Wheelchair - Ms. Magazine
Skip to content 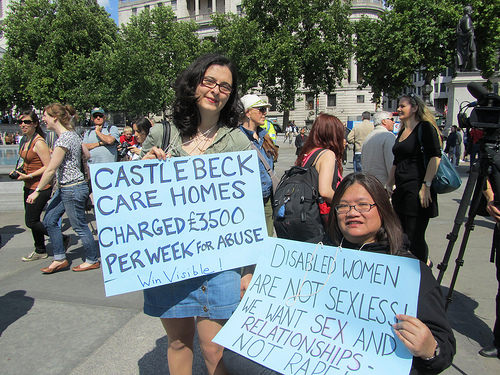 As a sexual violence prevention educator, I find hope in the grassroots activism and passion that radiates from SlutWalk. Anything that gets people talking, that breaks down the myths and reduces victim shaming, is a step in the right direction. This activism is so badly needed in a society that still justifies violent victimization according to what women are wearing or how they choose to spend their Friday nights. The photos of women clad in sneakers, jeans and comfy t-shirts carrying signs that read “THIS IS WHAT I WAS WEARING WHEN I WAS RAPED” make my heart ache. But after reading all of the discussion, I’m left wondering if there’s a place for me in SlutWalk.

Much has been written about SlutWalk and the problematic nature of the word “slut.” Many women of color, in particular, have made it clear that they don’t want to reclaim the word because of the way their sexuality has been constructed throughout America’s racist history. As a woman in a wheelchair, I have a very different problem.

No, my problem is that the word “slut” has never felt like mine to reclaim. While women all over the world are waiting for people to stop seeing them as sex objects, women with disabilities are still waiting to be seen at all. We are less than a woman, somehow–certainly less than “slut.” Too often we are viewed as pitiable, pathetic and devoid of desire. We could never be “sluts.” If we are “lucky enough” to have partners, they get congratulations and pats on the back from strangers when they “take us out” in public. People applaud their generosity and selflessness for taking care of us, assuming they get nothing in return (certainly not sex or satisfying intimate connections). People imagine we are loved “in spite of” our disabilities rather than for all the other things we are. We struggle to find doctors who will monitor our pregnancies and help deliver our babies because it’s “dangerous” for us to be mothers.

But that doesn’t mean we’re any safer. Women with disabilities face extremely high rates of sexual assault. More than half of us will be raped and studies estimate that the figure is closer to 70 to 80 percent for women with developmental disabilities. We’re also more likely than women without disabilities to face multiple perpetrators. Sometimes these perpetrators even tell us we should be grateful, that they have done us a favor. After all, no one else is going to want us. Despite these astronomical rape figures we have almost no credibility in the criminal justice system. No one could imagine why anybody would do that to “someone like us.” They tell us that we can’t be trusted to tell our own stories of terror. They speculate about our ability to even understand what has been done to us.

This is why it’s absolutely crucial for women with disabilities to have a voice in SlutWalk. While “reclaiming slut” isn’t for me, I think SlutWalk should be about more than that. It’s about demanding that all women be allowed to embrace their sexuality, voice our outrage when someone violates us and be heard loud and clear when we do it.

ABOVE: Advocates for women with disabilities at SlutWalk London. Photo from Flickr user dis_ppl_protest under Creative Commons 2.0.

War on Women Report: Republicans Propose 150 Anti-Trans Bills; Idaho Republican Says Women Are Like Cows; Trump Glosses Over His Role in the End of Roe
The ERA Has Been Ratified, Declares New Congressional Resolution
Biden Administration Clings to Title 42, Despite Its Harm to Asylum Seekers