We Are the 99%, Too: Creating a Feminist Space Within Occupy Wall Street - Ms. Magazine
Skip to content 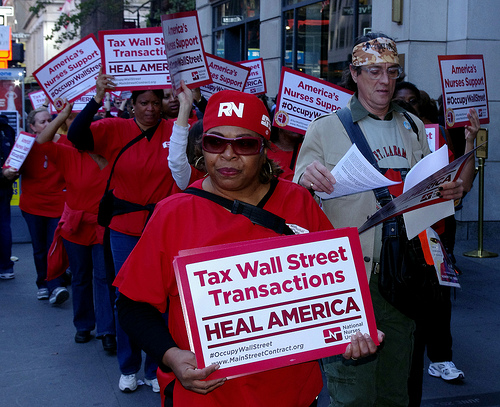 As most people know by now, something big is happening on the streets of New York City. It began on September 17, where a growing number of protestors began occupying Wall Street, many of them camping out in Liberty Plaza. Though first largely ignored by the media, Occupy Wall Street has gained steadily increasing attention—especially following the mass arrest of more than 700 protestors on the Brooklyn Bridge October 1—and has inspired similar protests and occupations in hundreds of cities around the world. Critics of the movement have complained about the occupiers’ lack of clear demands. But, in the words of Occupy Wall Street organizer Yotam Maron,

We wouldn’t be on Wall Street if we didn’t already have an implicitly unifying message: We hold the banks, the millionaires and the political elite they control, responsible for the exploitation and oppression we face–from capitalism, racism and authoritarianism to imperialism, patriarchy and environmental degradation.

If there’s one overriding message in the Occupy Wall Street movement, it’s that the masses are sick and tired of the distribution of power in America and around the world. And they are not going to sit back quietly and accept it any longer.

There are a multitude of reasons why feminists should be engaging with the Occupy movement. When we think about the drastic economic inequities in our society, it’s not difficult to recognize the specific ways that women suffer from economic injustice. Women face a multitude of barriers to economic equality–from the still-present wage gap between men and women to the devaluation of so-called pink-collar jobs. Women also fill the majority of public-sector jobs, which are so often jeopardized in times of economic crisis. And women continue to struggle for equal opportunities in the workplace while balancing work with motherhood.

Because we are already starting from a disadvantaged position, women are often among the hardest hit in economically troubled times, and this is especially true for women of color. Women are also disproportionately impacted when states slash public services, as so many have done in recent months. Because they are far more likely than men to be single parents struggling to provide for a family on a single income, many women are devastated by cuts to family assistance programs. And as we have seen repeatedly with the threatened federal cuts to Planned Parenthood funding, as well as several individual states’ recent cuts to family planning programs, women’s health services are considered by many politicians to be expendable.

Even though many women today do occupy positions of class privilege, any real feminist analysis of society has to take into account the intersections of both race and class with gender. And when we consider that women—again, primarily women of color—are disproportionately likely to be living in poverty, it’s clear that the Occupy Wall Street movement, which seeks to end the vast economic inequity in our society, should absolutely be of feminist concern.

On the other side of the coin, though, the ‘Occupy’ movement needs to embrace feminism as part of its cause. The folks I know personally who have been working tirelessly for the movement in New York are committed to a platform opposing all forms of oppression. But those views are not necessarily a reflection of all who are “occupying” New York and elsewhere. In the short time I’ve been involved with the developing Occupy Detroit movement, I have already met with resistance from some people when trying to bring gender—as well as race and sexual orientation—into the dialogue. The arguments given are probably familiar to any feminist activist who has engaged in broader-based movements: that we will only dilute our message if we start talking about all these different issues at once; that we need to focus on this one big issue that affects all of us; that we’ll deal with all these “social issues” later.

Many—typically straight white men—claim that talking about gender and race will only divide us, when what we need is to be standing together and focusing on how we’re all the same. But the reality is that we do not all experience oppression in the same ways. There is value in uniting–the ‘Occupy’ movement’s slogan that “we are the 99%” is a powerful one–but our experiences still differ based on race, class, gender and sexual orientation. It is perhaps a well-intentioned notion to imagine that we can unite in a way that transcends these categories, but it’s a notion that has no basis in the reality of our society. Because these categories, however artificially constructed they might be, still play a huge role in how and to what degree we are exploited, it is impossible to fight oppressive forces without acknowledging the reality of how they function. We can stand in solidarity with one another without pretending that our experiences are identical. In fact, I would argue that the only true solidarity is one in which we fully recognize and respect both how our struggles are alike and how they differ.

This is not about—as many within the movement fear—just trying to piggy-back a bunch of unrelated “social issues” onto a movement for economic justice. It’s about recognizing that all of the various forms of oppression in our society are so interwoven that it would be impossible to truly fight one without fighting the others. When we think about the elite 1 percent in a position of economic and political power in America, we have to recognize that those elites are predominantly straight, white men. Their position of power is upheld by patriarchy, by white privilege, by heteronormativity. If we want to dismantle oppression in our society, we can only hope to do so by recognizing the ways in which these various systems of oppression intersect and support one another. That doesn’t mean we can’t focus on the economy as a nexus of inequality; clearly, the occupation of Wall Street speaks directly to fighting corporate power and economic privilege. But we cannot imagine creating a society rooted in equality without fighting for all forms of equality, and that includes embracing feminist values.

This might very well be a crucial point for all of us dedicated to working for social justice. The Occupy Wall Street movement is energizing and inspiring. The organizers in New York, who I receive reports from regularly, are more confident and more driven with every passing day. I, along with thousands and thousands of activists and ordinary folks across the country and around the world, believe this movement has the potential to create real social change. But the movement’s full potential can only be realized if it acknowledges and confronts all the systems of privilege that separate those of us who have power from those who do not. As feminists, we need to seize the opportunity to plug into this movement and make our voices heard. In turn, those already in the movement must be willing to listen. That’s what real solidarity is all about.