Dating While Feminist: An Interview with Samhita Mukhopadhyay - Ms. Magazine
Skip to content 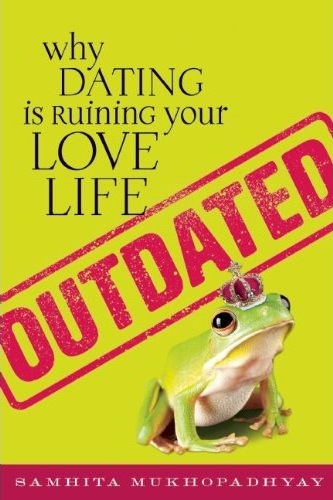 Samhita Mukhopadhyay is the executive editor of Feministing.com, one of the largest feminist or social justice blogs. Her new book, Outdated: Why Dating is Ruining Your Love Life (Seal Press) questions the traditional relationship advice so often aimed at young people. Unlike other dating manuals, her book doesn’t assume you’re straight, white, cisgendered, middle-class or looking to get married. Ms. talked with Mukhopadhay about relating while dating–and why feminism is so critical to a progressive dating practice.

Ms. Blog: What led you to write a book about dating?

Samhita Mukhopadhyay: At Feministing, I’ve focused a lot on race, class, gender and sexuality from the perspective of activism, but not as much from the perspective of pop culture. I became interested in mainstream media depictions of women and how those depictions impact our lives and our feelings about ourselves. I saw this huge hole in the dating advice industry: I was shocked that no one had written an intervention to the antiquated sexist ideas peddled by mainstream dating books.

Speaking of antiquated ideas, did you read Kate Bolick’s “All The Single Ladies” piece in the November 2011 issue of The Atlantic?  I was disheartened to see such a prominent feature article promoting the same tired ideas: that women are all straight, desperate to get hitched, and only interested in men who have more social clout and make more money. Why hasn’t feminism been able to undo these damaging ideas?

First of all, I think people have so bought into the romantic fairy-tale story that deviating from it is almost impossible to imagine. What I talk about in my book is that we don’t have an alternative romantic story. The only language we have to describe our romantic relationships is either “couples” or “sad single people.” And I think the analysis in these pieces is lazy. These writers aren’t thinking enough about how the world is changing and how gender roles have shifted. You can either harp on the idea that men aren’t men anymore and that women are too independent, or you can acknowledge that the world has changed and that we need to focus on what will make us happy in our lives.

Her argument seems to boil down to Lori Gottlieb’s: Women who don’t marry early on are doomed to be single if they wait.  How can feminists counteract that message?

First of all, that is statistically not true.  Most people who get married in their 20s are divorced by their 40s [laughs]. For the small percentage of people who marry in their 20s and stay married into their 80s, marrying young is great. But for most people, that’s just not the reality anymore. We move in and out of relationships throughout our lives. Most people need to learn to deal with both being in a relationship and being single.

In your book, you coin the term “romantic industrial complex.” Can you talk a little about what that means?

How does the idea of community transform the culturally dictated need for a romantic partner?

I think when we examine how we think of relationships vs community, it opens up an alternative space where we can create supportive communities that don’t rely on couples.

Do you think any of the traditional advice from self-help books is helpful for folks?

Yes, I think a lot of the mainstream books I surveyed had kernels of truth to them, but what I found problematic was the framing and the reliance on essential gender differences. He’s Just Not That Into You is right in telling women that if a dude is giving you the run around, you should probably let him go. But the focus is on whether he is “into you” or not, when it should be on whether or not he meets your needs. I.e., do you even want to date someone who can’t call you back or doesn’t respect your time enough to give you a straight answer? Most likely, no.

The most radical approach to love is not having an approach, but instead a solid recognition of exactly what you want for yourself. Feminism can help you decipher the difference between something you want and something that is expected of you, which is an invaluable exercise not just in dating, but in life. It’s not always easy, but ultimately will make you happier if you do end up in a relationship because you are more likely to enter it on your own terms.

What future projects do you have on your plate?

Promoting this book for at least the next year! And some speaking, Feministing and some other writing. And I am really interested in the idea of being sustainable in the work that we do as feminists, activists and writers. I am going to be focusing on health and healing; how to make our work helpful and impactful while also making sure we get enough sleep.