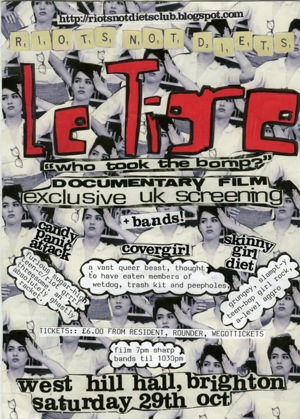 After a week of serious talks and films, we’ll be ready to jet off to Brighton, U.K., for a riot grrrl-themed Halloween party. What era Kathleen Hannah will you be dressing as?

Can’t make it? Be sure to catch the rest of the series on PBS through October and November.

Boston: At the Access Denied: DOMA and Immigration A Community Forum, specialists from GLAAD, Immigration Equality and Iandoli and Desai P.C. will discuss the latest developments in the fight against the Defense of Marriage Act (DOMA) and explain the immigration problems it causes for same-sex couples. Saturday, Oct. 29, 2  – 5 p.m., Harriet Tubman House, 566 Columbus Avenue, Boston, MA.

Know of upcoming events? Share them in the comments or online here! Commenter Belle of Acadia has requested some Canadian events, and we aim to please–help us out with a tip.

* UPDATE: After this post was published, a Facebook commenter brought something to our attention that we had previously overlooked:

I’d just like to point out that the Halloween event you link to here includes, what I would consider to be hate speech against Julie Bindel – is this something you are ok with/promote?

We took a second look, and found a Halloween costume “joke” that we agree is over the line. We like Le Tigre (and know that many of our readers do too) and thought this would be a great event to feature in this week’s calendar, but we don’t condone hate speech want to make that clear. Thanks to the Facebook commenter who pointed this out.

ABOVE: Poster from Riots Not Diets.